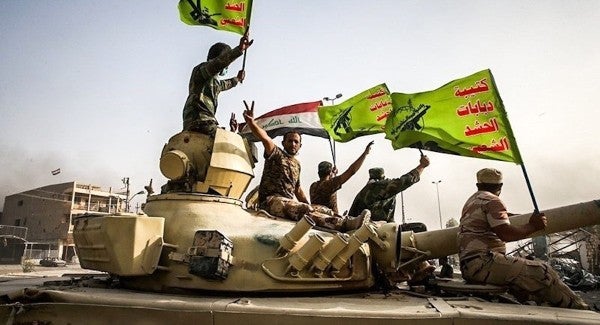 BAGHDAD (Reuters) – Iraq's paramilitary groups on Wednesday blamed a series of recent blasts at their weapons depots and bases on the United States and Israel.

The statement from the Popular Mobilization Forces (PMF), the umbrella grouping of Iraq's mostly Shi'ite Muslim paramilitary groups, many of which are backed by Iran, said the United States had allowed four Israeli drones to enter the region accompanying U.S. forces and carry out missions on Iraqi territory.

“We announce that the first and last entity responsible for what happened are the American forces, and we will hold them responsible for whatever happens from today onwards,” said the statement, signed by deputy head of the PMF, Jamal Jaafar Ibrahimi, known by his nom de guerre Abu Mahdi al-Mohandes.

The PMF statement came a day after several blasts hit a position held by a PMF group next to Balad air base about 80 kilometers (50 miles) north of Baghdad.

As tensions between Washington and Tehran increase, Iraq finds itself caught between neighboring Iran, whose regional influence has grown in recent years, and the United States.

The U.S.-led coalition, in Iraq to fight remnants of the Islamic State group, dismissed the statement.

“The mission of CJTF-OIR in Iraq is solely to enable our Iraqi Security Force partners in the mission of an enduring defeat of Daesh,” it said, using an alternative name for Islamic State. “We operate in Iraq at the invitation of the Government of Iraq and comply with their laws and direction.”

Iraq declared victory over Islamic States in 2017, but there are still operations near-weekly against the group.

A blast last week at a weapons depot run by one group sent rockets careening across southern Baghdad, killing one person and wounding 29 others. Police at the time attributed the explosion to poor storage and high temperatures, but a government investigation is underway.

Prime Minister Adel Abdul Mahdi last week ordered all ammunition dumps belonging to the armed forces or paramilitary groups to be moved outside of cities.

He also canceled all special flight permissions for Iraqi and foreign aircraft, meaning sorties including by the U.S.-led coalition operating against Islamic State militants must be cleared in advance by the prime minister.

Some analysts have suggested the strikes might have been carried out by Israel, which last year signaled that it could attack suspected Iranian military assets in Iraq, as it has done with scores of air strikes in Syria.

Israeli officials have suggested recently they view Iraq, whose main ally is Israel's regional foe Iran, as more of a threat than in recent years, but have not directly commented on the recent blasts at PMF sites in Iraq.