"We've alerted other forces,"  said Gen. Mark Milley chairman of the Joint Chiefs of Staff. "They haven't yet been decided to deploy. But there's a variety of forces that are alerted and prepared, if necessary, depending on the situation, as we move forward." 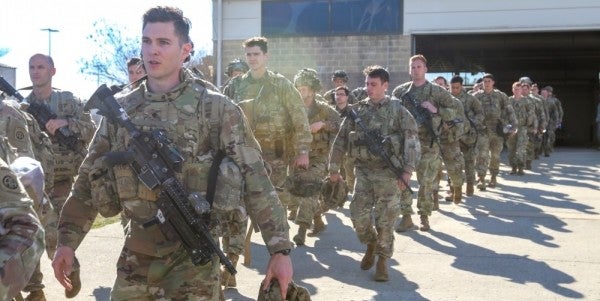 The U.S. military could send more troops to the Middle East following a recent attack on the American embassy in Baghdad, said Army Gen. Mark Miley, chairman of the Joint Chiefs of Staff.

The Defense Department has already sent about 100 Marines with a Special Purpose Marine Air-Ground Task Force to the embassy and about 700 paratroopers from the 1st Brigade Combat Team, 82nd Airborne Division, to Kuwait in case they are needed in Iraq.

“We've alerted other forces,” Milley told reporters at a Pentagon news conference. “They haven't yet been decided to deploy. But there's a variety of forces that are alerted and prepared, if necessary, depending on the situation, as we move forward.”

Milley did not specify how many troops could be sent to Iraq or which units they might come from.

The soldiers from the 1st Brigade Combat Team, 82nd Airborne Division are part of a rapid reaction force and their mission is defend U.S. personnel, equipment, and facilities, Milley said.

When asked if more soldiers from that brigade could be deployed to the Middle East, Defense Secretary Mark Esper replied, “We'll take it day by day.”

It was not immediately clear if Iraqi government would have to approve an increase in U.S. troops. Both the United States and Iraq had previously agreed to cap the number of U.S. service members in the country at roughly 5,200.

Tuesday's attack on the Baghdad embassy was reportedly carried out by members of the Popular Mobilization Forces, which are Shiite militia fighters that Iran has used as proxies in Iraq and Syria.

Esper accused Iran and its proxies of launching a dozen attacks U.S. and allied bases over the past two months. He added that he expects these attacks to continue.

“Do I think they may do something? Yes. And they will likely regret it,” Esper warned. “We are prepared to exercise self-defense and we are prepared to deter further bad behavior from these groups, all of which are sponsored and directed and resourced by Iran.”

The U.S. military recently launched airstrikes against Kata'ib Hezbollah, an Iranian militia that is part of the Popular Mobilization Forces, after a Dec. 27 attack on a U.S. base at Kirkuk that left an American contractor dead and several service members wounded.

“We know the intent of this last attack was, in fact, to kill American soldiers, sailors, airmen, Marines,” Milley said on Thursday. “Thirty-one rockets aren't designed to be warning shots. That's designed to inflict damage and kill.”

Milley also accused Kata'ib Hezbollah of carrying out the attack against the heavily fortified embassy as “a demonstration, so to speak … for the cameras” that was meant as a media stunt.

“We are confident that the integrity of that embassy is strong and it is highly unlikely to be physically overrun by anyone,” Milley said. “There is sufficient combat power there for air and ground that anyone who attempts to overrun that will run into a buzz saw.”