A defense official told Task & Purpose the strikes were "all over Iraq." 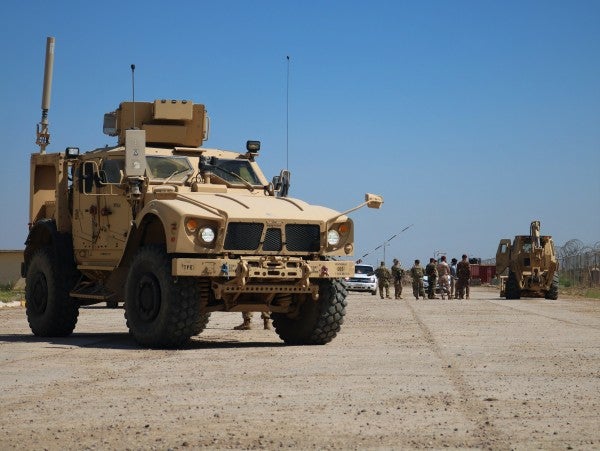 The U.S. military on Thursday struck an Iranian-backed militia in Iraq that were responsible for Wednesday's rocket attack against Camp Taji.

The Defense Department said in a statement that the strikes targeted five weapon storage facilities belonging to Kata’ib Hizbollah, which “housed weapons used to target U.S. and coalition troops.”

“These strikes were defensive, proportional, and in direct response to the threat posed by Iranian-backed Shia militia groups (SMG) who continue to attack bases hosting [Operation Inherent Resolve] coalition forces,” the statement said.

Fox News first reported news of the airstrikes. Two defense officials confirmed the news to Task & Purpose, with one adding that the strikes were happening “all over Iraq.”

Earlier in the day on Thursday, Defense Secretary Mark Esper told reporters that all options were on the table for a response to the Wednesday attack, which left two Americans and one British service member dead.

An American official told the New York Times that the two Americans killed were with the Army and the Air Force.

Joint Chiefs Chairman Gen. Mark Milley told reporters that 14 others were wounded in Wednesday's attack, including American, British, and Polish troops, as well as contractors. A total of 30 rockets were launched, he said, with 12 to 18 of them making contact with Camp Taji.

“The United States will not tolerate attacks against our people, our interests, or our allies,” Esper said in the Pentagon's statement. “As we have demonstrated in recent months, we will take any action necessary to protect our forces in Iraq and the region.”