Iran is back to harassing US ships in the Persian Gulf

The Iranians are back at it again. 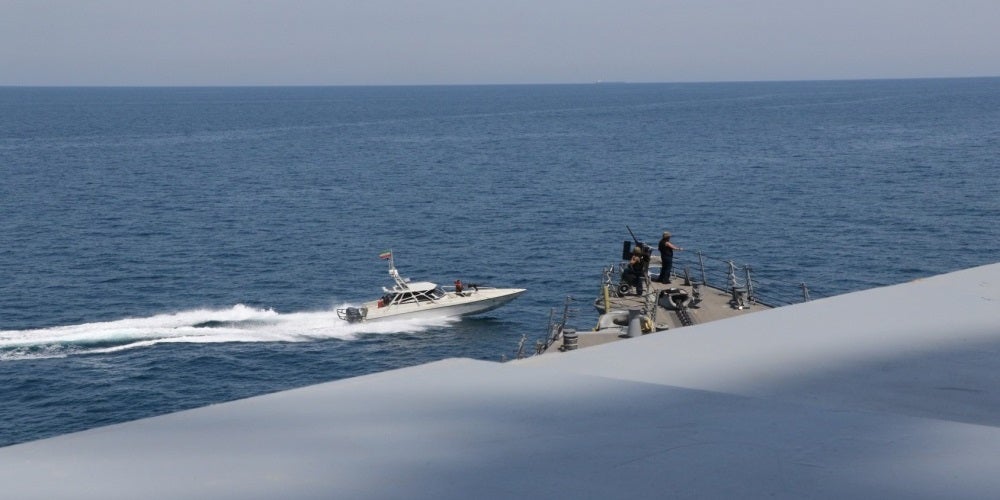 The Iranians once again tried to mess with U.S. ships in the Persian Gulf, with one Iranian boat coming dangerously close to a Coast Guard cutter’s bow on Wednesday, according U.S. Naval Forces Central Command.

The Iranians harassed the expeditionary mobile base vessel USS Lewis B. Puller along with the destroyer USS Paul Hamilton, the patrol ships USS Firebolt, and USS Sirocco, and the Coast Guard cutters USCGC Wrangell and USCGC Maui, the release said.

“The IRGCN vessels repeatedly crossed the bows and sterns of the U.S. vessels at extremely close range and high speeds, including multiple crossings of the Puller with a 50 yard closest point of approach and within 10 yards of Maui's bow,” the news release says.

The Iranian boats ignored multiple warnings by radio, the U.S. ships’ horns, and a long range noise maker for about one hour before they finally responded to bridge-to-bridge radio messages and broke off from their aggressive maneuvers, the news release says.

The incident happened while the U.S. vessels were in international waters in the Persian Gulf, which the Navy continues to call the Arabian Gulf for reasons that defy logic.

“U.S. naval forces continue to remain vigilant and are trained to act in a professional manner, while our commanding officers retain the inherent right to act in self-defense,” the NAVCENT news release says.

But in the early part of President Donald Trump’s administration, the number of unsafe interactions with the Iranians dropped significantly from 36 in 2016 to 14 in 2017 and just one by July 2018, a 5th fleet spokeswoman told Task & Purpose at the time.

However, since then the U.S. military has killed the former head of the IRGC, Maj. Gen. Qasem Soleimani, and launched further strikes against Kata’ib Hezbollah, an Iraqi military group that is also an Iranian proxy force.

In January, a top U.S. military commander in the Middle East said that most attacks against U.S. forces in Iraq are carried about by Shiite militia groups.