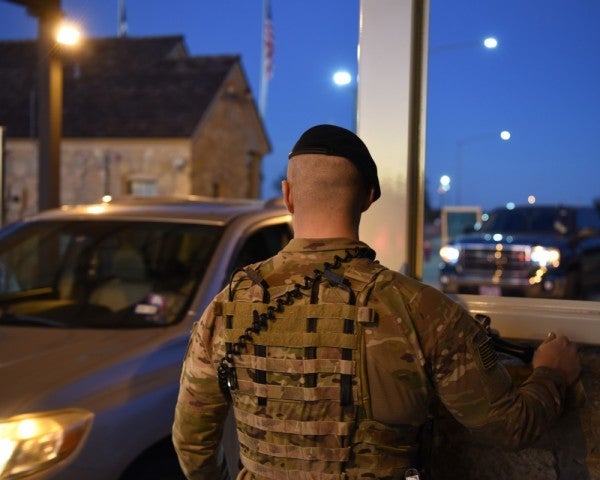 In a statement sent to Task & Purpose, U.S. Northern Command, which is responsible for all bases in the continental U.S. and Alaska, stated that it is “implementing additional force protection condition measures to increase security and awareness for all installations in the U.S. NORTHCOM area of responsibility.”

Maj. Mark Lazane, a NORTHCOM spokesman, said he could not discuss specifics of the security increase. However, he explained that NORTHCOM bases have already been at Force Protection Condition Bravo “for some time.”

According to the Defense Logistics Agency, force protection conditions describe what steps must be taken by base security forces in response to various levels of terrorist threats.

FPCON Bravo is the third-highest out of five possible threat FPCON levels, and it applies “when an increased or more predictable threat of terrorism attack or hostile act exists and is directed against DoD elements and personnel,” DLA explains.

In the aftermath of the Friday airstrike that killed Soleimani, Iranian Maj. Gen. Hossein Dehghan promised widespread military retaliation against both U.S. military personnel and installations around the world.

A senior defense official had previously told reporters in a conference call on Friday that U.S. Central Command, which is responsible for military activity in Southwest Asia, was also on its toes with regard to the safety of U.S. personnel, although the official declined to give specifics.

“Iraq is a significant concern given the number of US personnel in that particular country,” the official said. “But anywhere the United States has US personnel we are going to be carefully monitoring and preparing to defend ourselves if necessary.”