"We’re not asking anything we wouldn’t ask of ourselves." 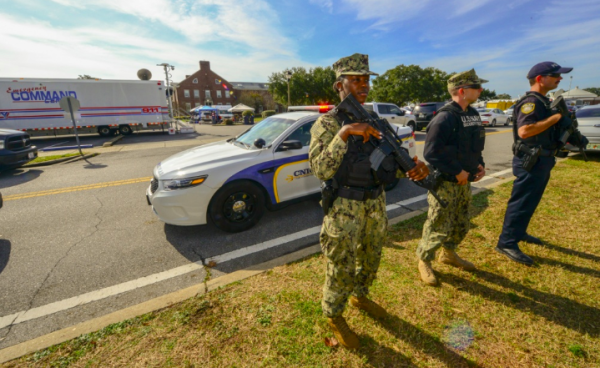 “Going forward we will put several new policies and security procedures in place to protect our people, programs, and installations. These include new restrictions on international military students for possession and use of firearms, and control measures for limiting their access to military installations and U.S. government facilities,” Garry Reid, director for defense intelligence, told reporters on Friday.

“We will also impose new standards for training and education on detecting and reporting insider threats, and establish new vetting procedures that include capabilities for continuous monitoring of international military students while enrolled in U.S.-based training programs.”

The new policies are a result of a review of vetting procedures for foreign students, which was started after the shooting at Naval Air Station Pensacola in December — when a Saudi student studying in the U.S. killed four people, including himself — and the following expulsion of 21 other Saudi students over jihadi content and child pornography.

Restrictions will not be tailored to the students' home countries.

A senior defense official further explained the new policies, saying the department would be “fully implementing” a system called the Defense Biometric Identification System (DBIDS), which aims to “prevent unauthorized access to facilities and installations.”

As for firearm restrictions, the official said there is “not a current policy specific to the international military students,” and that the restriction will bar students from purchasing firearms in the U.S.

On an installation level, commanders will be implementing travel restrictions based on the location of the installation, population size, and training parameters.

“Any military member knows that you may be at one base and the restriction on weekend travel without taking leave is 300 miles, but if there's a major city that people go to on a regular basis that's 310 miles, that local commander has the ability to expand that a little bit to give an equal additional mobility without really getting away from the intent of the guidance to have people available,” the defense official said.

Foreign students will now also undergo “continuous vetting and screening” while they are in the U.S. for training.

While some of the new policies are in response to the Pensacola shooting, an official emphasized that they are not all directly related to that incident, especially because some of the new policies may not have stopped the shooting. For example, the credentialing policy that will restrict access on-base to foreign students would not have impacted the Pensacola shooter, because he was on a base, and in a facility, which he was authorized to have access to.

The official said that the department has received “strong support” from partner nations regarding the new policies, and that they are “not asking anything we wouldn't ask of ourselves.”

“All current and future students will be required to acknowledge their willingness to abide by these standards,” Reid said. “Committing to full compliance with all U.S. laws on- and off-duty as a condition of their enrollment.”