Under the new policy, landmines would be used only if they have a 30-day self-destruction or self-deactivation feature. 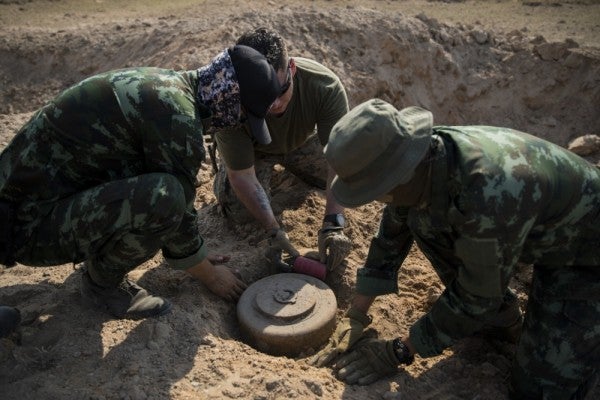 The Pentagon is loosening restrictions on the military's use of anti-personnel landmines in a move that reverses Obama administration commitments to ban the use, stockpiling, production and transfer of such weapons.

Those commitments, which were made in adherence to international agreements out of concern for the lasting impact of buried landmines on civilian populations, increase risks to U.S. troops of being outflanked, especially as the military prepares to counter threats from China and Russia, CNN first reported defense officials as saying.

Defense Secretary Mark Esper confirmed to reporters at a briefing on Thursday that a change was coming to the Pentagon's landmine policy, but declined to comment until it was released.

The reported changes come three years after then-Defense Secretary Jim Mattis launched a review of landmine policy which found that it had “increased risk to mission success” and to US personnel, CNN said.

The Obama policy was put in place in 2014 to adhere to the 1997 Ottawa convention, which 164 countries signed in an effort to “put an end to the suffering and casualties caused by anti-personnel mines, that kill or maim hundreds of people every week, mostly innocent and defenseless civilians and especially children,” the agreement states.

Landmines caused more than 130,000 casualties around the world between 1999 and 2018, says the non-government organization Landmine Monitor, with the majority of those killed being civilians, CNN said.

The Obama policy included an exception allowing the U.S. military to continue using landmines on the border between South Korea and North Korea. However, outside of the Korean peninsula, the policy directed the destruction of landmine stockpiles, CNN reported.

Now, following the Pentagon review, the Trump administration will provide authority to U.S. military officers at the combatant command level to decide whether or not to use landmines, said CNN. Defense officials say landmines can help troops defend against enemy attacks and influence the enemy's direction of movement, CNN reported.

The new policy recommended by the Pentagon is expected to allow the use of landmines only if they have a 30-day self-destruction or self-deactivation feature, which is supposed to help prevent civilian casualties, CNN said. Under the new policy, development, production and procurement of new landmines would only be allowed if they included such a feature, reported CNN.

Notably, neither China, Russia, nor Iran signed onto the 1997 Ottawa convention, and the U.S. military is already working to prepare its forces for a confrontation with any of those countries.

The Pentagon has said that the number of landmines currently in the US military's inventory is classified, CNN said.