For years, military officials and lawmakers have acknowledged and tried to crack down on, sexual abuse of young boys by... 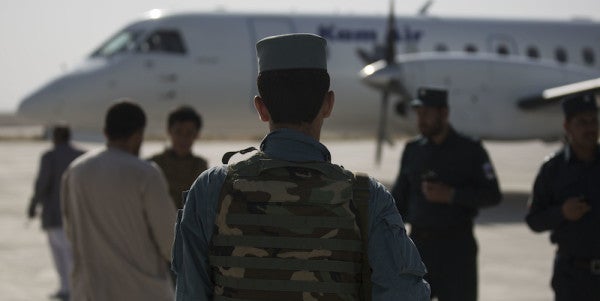 For years, military officials and lawmakers have acknowledged and tried to crack down on, sexual abuse of young boys by Afghanistan’s security forces. But a new Pentagon inspector general audit reveals that the well-known problem will require more than legislative gymnastics to address: U.S. Forces-Afghanistan only identified 16 allegations involving Afghan government officials between 2010 and 2016 — and barely did anything about them.

Child sex abuse has been a staple of the War in Afghanistan since its earliest years when pedophilia among regional warlords — and occasional coalition allies — remained common knowledge among U.S. military personnel. In 2015, lawmakers took action, pushing to amend the “Leahy Law” — a 1997 defense-budget amendment that prohibits military assistance to foreign allies implicated by “credible information” in gross violations of human rights — to include sexual assaults of the sort seen in Afghanistan. The DoD also issued guidance that year requiring U.S. personnel to report suspected human rights abuses immediately.

Prior to the September 2015 guidance, the DODIG’s report said, U.S. personnel “may not have known to report allegations of child sexual abuse to their chains of command.” But things didn’t improve much after the guidance came down, either.

USFOR-A lacks a clear picture of the problem “due to inconsistent DoD reporting procedures and an overall lack of unified guidance on reporting and record-keeping relating to child sexual abuse,” according to the DODIG report. It’s an unsurprising conclusion, given the frequent disappearance of U.S.-supplied weaponry in Afghanistan, as well as the apparent ubiquity of “ghost soldiers” used to funnel cash into officials’ pockets. The upshot: Children are continuing to be raped by Afghan security forces while U.S. forces, tasked to “fight for right and freedom,” are either looking the other way or stumbling over how to report what they see.

Some of those issues may be rooted in the military’s guidance itself. After it came down in September 2015, the Daily Beast obtained a copy of a 45-minute presentation on sexual abuse and “local nationals” shown to Marines preparing for new deployments overseas. (It’s unclear if this was the same presentation as the “Mandatory Reporting of Suspected Human Rights Abuses” slides mentioned in the 2017 DoD IG report.) The presentation “ say that they shouldn’t report sexual assaults in the countries where they’re serving,” according to The Daily Beast. “But it explains that laws and norms about sexual relations vary from country to country, and that in Afghanistan in particular, sexual assault is a ‘cultural’ issue, and not a purely legal one.”

While U.S. forces clearly didn’t embrace the practice of pedophilia, the suggestion was clear: If you see something, you don’t necessarily have to say something. “We did not identify any guidance or policy that expressly discouraged personnel from reporting incidents of child sexual abuse,” the DoD IG report notes of the informal culture of silence. “However … DoD cultural-awareness training for U.S. personnel deploying to Afghanistan and two Human Terrain System Reports identified child sexual abuse as a culturally accepted practice in Afghanistan.”

It’s that culture of silence that sparked congressional action in the first place in the form of two highly-publicized incidents involving U.S. military personnel and abusive ANDSF commanders. In 2012, Lance Cpl. Gregory Buckley was murdered, along with two fellow Marines at Forward Operating Base Delhi in Helmand Province, at the hands of “one of a large entourage of boys” who lived with an Afghan National Police commander who had a reputation for child abuse. His murder came two weeks after he reportedly expressed concern over the police officer’s “tea boys; according to the New York Times, his warnings went unheeded.

The previous year, the Army moved to involuntarily discharge Sgt. 1st Class Charles Martland for beating an Afghan local police militia commander to a pulp; Martland was angry that the cop had “abducted a boy and kept him chained to his bed as a sex slave,” the New York Times reported.

Lawmakers lobbied hard for Martland’s reinstatement — which he earned in April 2016. But their stories underscore the culture of inaction that enabled such abuses. Martland had told the Army that he “felt that morally we could no longer stand by” and allow Afghan security forces “to commit atrocities” with impunity while U.S. military personnel did nothing.

Army Sgt. 1st Class Charles Martland during his deployment in Afghanistan, circa 2011Photo via DoD/CNN

Buckley’s story, reported in depth by the New York Times in 2015, sparked even more outrage among lawmakers. “At night we can hear them screaming, but we’re not allowed to do anything about it,” Buckley reportedly told his father days before his death, according to the Times. Buckley’s father told the Times that “his officers told him to look the other way because it’s their culture.”

That culture of neglect makes it hard to actually enforce the Leahy Law. The DoD IG found that even with 16 allegations over six years, Pentagon decisions to withhold funding from foreign partners suspected of Leahy Law violations “only occur about once a year.” And according to the report, the ambiguity surrounding the circumstances of abuse reports generates “inconsistent credibility determinations that, in the absence of clearly articulated guidance, could adversely affect the OUSD(P)’s ability to comply with the DoD Leahy Law.” Translation: Sorry, but we can’t effectively comply with a law if we have no idea how bad the problem is!

Not that a sudden uptick in Leahy Law violation-reporting or actual enforcement would make a difference. Despite widespread corruption and diminishing returns on investment, the United States continues to pour financial and material support into the Afghanistan security forces to beat back a resurgent Taliban, which has made frustrating gains since the official end of NATO combat operations in 2014. The United States is stuck in a 16-year-old campaign, and despite the valiant efforts of whistleblowers like Buckley and Martland, Afghan child abuse appears to be an interminable feature of America’s forever war.