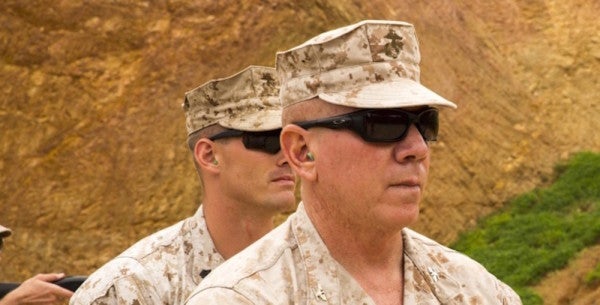 Col. Daniel Wilson is a 36-year decorated Marine Corps officer with combat in two wars — Persian Gulf and Iraq — under his belt. Now, Wilson will spend the next five and a half years in prison for sexually abusing the six-year-old daughter of a subordinate.

On Sept. 10, a military jury found Wilson guilty on 23 counts of sexual abuse and misconduct after the girl alleged to her father, an unnamed Marine under Wilson’s command, that he touched her genitals, Military.com reports. The girl’s parents alleged Wilson had raped their daughter and performed other sexual acts on her twin sister, but these charges, in addition to a secondary accusation of sexual assault from a fellow officer’s wife, were dismissed.

In all, Wilson was charged with six counts of assault of a child under 16, three counts of of sexual assault and sexual abuse of a child, failure to obey orders, unauthorized absence, and eight counts of conduct unbecoming an officer and a gentleman — a whopping 23 specifications, the Daily Beast reported.

“I’ve spent 35 years in the Marine Corps, never accused of anything at all,” Wilson said in an NCIS tape obtained by the Daily Beast, “and then, boom! Your whole world is upside down.”

The details of the misconduct are deeply disturbing. According to testimonies during the trial, Wilson and his wife Susan reportedly hosted a dinner party at their Camp Lejeune home on July 13, 2016, inviting the victim’s family, with whom they were close friends. It was there, in one of the Wilsons’ bathrooms, that the mother alleged her daughter was assaulted. She and her husband also stated during the 10-day trial that Wilson offered alcohol to their oldest daughter, aged ten.

According to reports, the incident was just one instance in a pattern of heinous behavior. In November 2016, Wilson was charged with conduct unbecoming an officer and a gentleman after accounts about a number of inappropriate sexual behaviors and excessive alcohol consumption became public, leading to his release from a liaison post in Darwin, Australia. However, base authority Maj. Gen. Walter L. Miller decided that Wilson was low-risk and chose not to incarcerate him after consulting with base magistrate Craig Harvey.

Miller finally took action in January after a Wilson family friend named Jeri Walsh came forward claiming that Wilson assaulted her on Dec. 28 during a family trip to Beaufort, South Carolina. On Jan. 13, Miller placed Wilson in the brig, where he remained for eight months (During the trial, Walsh’s claims were found to be unsubstantiated, as were charges of rape and offering alcohol to a minor).

Throughout the saga, Wilson has maintained his innocence. It is unclear whether he or his family will be allowed to receive retirement benefits. His wife also chose not to testify on his behalf.

“No one else can bring Colonel Wilson to justice,” prosecutor Lt. Col. John Stephens reportedly told those present at the trial. “Most of all, this is about .”