A military appeals court on Monday dismissed the conviction of a Marine colonel who had been found guilty of child sexual abuse in 2017. 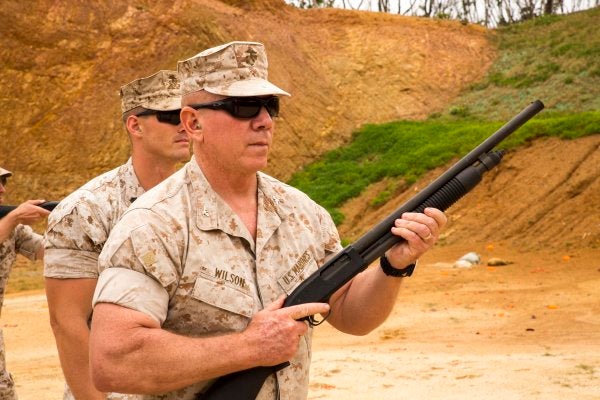 A military appeals court on Monday dismissed the conviction of a Marine colonel who had been found guilty of child sexual abuse in 2017.

Col. Daniel H. Wilson, who was sentenced to 5 1/2 years in prison and dismissal from the Marine Corps after being convicted in Sept. 2017, will now potentially face a re-sentencing hearing after the Navy-Marine Corps Court of Criminal Appeals concluded that the charge of sexual abuse was “legally and factually insufficient,” wrote senior judge Navy Cmdr. Angela J. Tang.

Two other appeals court judges concurred with the conclusion.

The charges related to three separate instances of alleged misconduct, to include alleged inappropriate behavior with colleagues while serving as the officer in charge of Marine forces in Darwin, Australia, and accusations of sexually abusing the young girls of a fellow Marine officer, and sexually and physically assaulting an adult woman, both at Camp Lejeune, N.C.

Wilson was acquitted of sexually assaulting the adult woman but convicted on one charge of sexual abuse of a young girl by “touching her genitalia.” Though he was acquitted of all other offenses related to the fellow Marine officer's family, he was found guilty of conduct unbecoming for making inappropriate comments and sending unprofessional social media messages to his Australian counterpart.

In his appeal, Wilson asserted that his conviction of sexual abuse lacked legal and factual justification. Among six assignments of error presented to the appellate court, Wilson's legal team said the military judge abandoned impartiality and erred by admitting an out-of-court forensic interview with the six-year-old child victim, identified only as BP, among other arguments.

The court found merit in the conviction of sexual abuse being “legally and factually insufficient,” and dismissed the charge with prejudice. It affirmed the conviction on conduct unbecoming and unauthorized absence, which are subject to re-sentencing.

“However, if that's too difficult, the convening authority can approve no punishment and be finished,” said Phil Stackhouse, Wilson's civilian lawyer. Wilson has been imprisoned for nearly two years.

The appellate court went over all the interactions between Wilson and BP in its 57-page decision. Wilson and his wife were friends with the daughter's parents, a Marine major and his wife, referred to as Major P and Mrs. P in the decision, who frequently hung out together.

The day the alleged abuse happened was July 13, 2016 at a dinner party hosted by the Wilson's at their home. A doctor who was a colleague of Major P was also in attendance, who testified that the kids often “rough housed and tumbled” with Wilson, “and they had some jokes and fun together.” While Mrs. P was mostly in the kitchen with Wilson's wife, Major P and the doctor were in the living room with Wilson and the kids.

“The record indicates that no one believed the appellant had any opportunity to commit a lewd act upon BP on 13 July 2016,” the court wrote.

At one point, the girl mentioned an “outie” and fell off the couch, before running to the kitchen to her mother. In a subsequent private exchange, the girl's mother told her “we don't show people our outies. You shouldn't be showing your bellybutton to anyone.” While the other daughters went upstairs, BP stayed with her mother, and told her that Wilson had “touched her genital area.”

Prior to this disclosure, however, Mrs. P had had a conversation with Wilson's wife, in which she described problems in their marriage. She said that Wilson had asked her if she “would engage in a three-way sexual encounter with another man.” The judge ruled this conversation could not be referenced at trial, but Mrs. P was allowed to testify that she was concerned and “shocked” about Wilson prior to the July 13 disclosure, based on something Wilson's wife had told her in confidence.

As the appeals court wrote, “BP's initial disclosure of abuse — as told to her in the kitchen — was the subject of intense cross-examination at trial. The cross-examination centered on whether Mrs. P was the first person to suggest that the appellant touched BP's genital area, or whether BP spontaneously disclosed touching without questioning by Mrs. P.”

Soon after the disclosure, Mrs. P “burst into the living room looking 'fired up,'” the court wrote. She said they all needed to leave immediately and once Major P had all three children outside of the house, Mrs. P told him that Wilson “touched” BP. She came back into the house and confronted Wilson, who the doctor described as “confused and dazed” and unsure of what was happening.

Once the P family arrived home, Dr. A stayed with the three P daughters while Major P consulted his chain of command and Mrs. P called 911. Officers from the base police and the Naval Criminal Investigative Service (NCIS) responded to the home and took preliminary statements from Major and Mrs. P. After the officers left, Major P walked Dr. A back to his hotel room, leaving Mrs. P at home with the three P children.

At trial, both parents of BP resisted defense suggestions that they had met with and told all three of their daughters about BP's allegation. They said they had made “generalized” references but denied asking for more details from BP before she spoke with a forensic interviewer.

“However, both SP and MP testified that their parents talked to them about the specifics of BP's allegation. MP said her parents told her that the appellant 'did something wrong to sister' and that Mrs. P 'told touched [BP] in a bad place.' SP testified that her parents gathered the three children together in SP's room on the night of 13 July 2016 and talked about what happened and asked a lot of questions about what the appellant did to them,” the court wrote.

NCIS agents quickly took statements from the P family and recorded a phone call between Major P and Wilson the next day in which he “adamantly denied that he touched any of the girls inappropriately.” The investigation did not yield any physical evidence beyond a small amount of unidentifiable DNA in a pair of BP's underwear, which were not “incriminating because Mrs. P washed BP's clothes in the appellant's washing machine, and BP lives with her father.”

The court also said that “no witness saw the appellant touch BP's genitalia,” or raised any cause for concern. Because of this, the government relied “almost entirely” on BP's testimony, which she said she had practiced with prosecutors and had talked to her parents about beforehand.

“Carefully evaluating all of BP's testimony and statements admitted at trial, we find that BP's statements were fatally inconsistent and wholly irreconcilable,” the court wrote. “Based on the evidence, we cannot discern how BP contends the appellant touched her, when he did so, or how many times she contends the abuse occurred. Faced with multiple descriptions of possible contact — only some of which are consistent with guilt — we cannot find guilt beyond a reasonable doubt based solely on BP's statements.”

The court added, after looking to other evidence, that it was not sufficient to overcome the weaknesses of BP's testimony. “There were no witnesses, physical evidence, or admissions of guilt by the appellant,” the court wrote.

“On every important aspect of the alleged offense — if abuse happened; when it happened; how many times it happened; and what happened — BP was inconsistent in non-trivial ways that cannot solely be attributed to her young age. BP's statements are the only evidence of the appellant's guilt. Based on the four major inconsistencies alone, we cannot be convinced beyond a reasonable doubt of the appellant's guilt. But even if we look at each of BP's statements separately, we still cannot discern a clear narrative of what abuse BP alleges the appellant committed.”

You can read the full decision below:

Disclosure: As a U.S. Marine, journalist Paul Szoldra served under the command of then-Lt. Col. Wilson for about two years at Infantry Training Battalion-West, at Camp Pendleton, California.