Army Col. Kathryn Spletstoser accuses Air Force investigators of implying that she 'had a history of false reporting' sexual harassment. 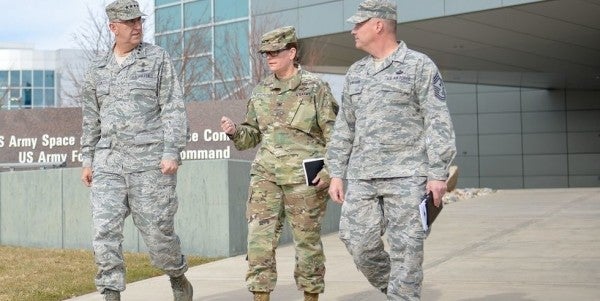 An Army officer has filed a federal lawsuit against Air Force Gen. John Hyten, vice chairman of the Joint Chiefs of Staff, alleging that Hyten sexually assaulted her while she worked for him at U.S. Strategic Command.

Hyten was confirmed as vice chairman in September. Spletstoser accused him of sexual assault after he was nominated for the job, but an Air Force investigation “was unable to find indications of an unprofessional relationship” between her and Hyten, according to a redacted copy of the investigation that was released in August.

In fact, one witness told investigators that Spletstoser had once threatened Hyten by saying, “I can destroy you publicly, or you could include me, and I can help fix your mess privately.”

“I accept that it is entirely possible that his accuser is a wounded soldier, who believes that what she is saying is true, even if it's not,” Wilson testified before the Senate Armed Services Committee. “That possibility makes this whole situation very sad.”

“The former Air Force Secretary's opinion about what she is or is not willing to accept is patently irrelevant,” Solomon wrote. “The opinion of a Jury that hears Gen. Hyten's testimony — subject to strident cross examination for the first time — is the only opinion I care about.”

In her lawsuit, Spletstoser claims that Hyten's security detail “falsely alleged” they never saw the two of them together. Moreover, Spletstoser accuses the Air Force of refusing to release emails “that highlight a familiar relationship between a four-star general and a colonel.”

“The ROI [Report of Investigation] also contained a ten-year-old sexual harassment complaint filed by COL Spletstoser but did not include information regarding other parties who filed complaints against the same supervisor, or that the Supervisor was ultimately reprimanded,” according to the lawsuit, which was first reported on by Law360. “Upon information and belief, this was included in the ROI to attempt to suggest COL Spletstoser had a history of false reporting.”

A spokeswoman for Hyten said she was aware of the lawsuit but could not comment about ongoing litigation.

“All previous allegations provided to the Department of Defense were subject to comprehensive investigation and unsubstantiated,” said Air Force Maj. Trisha Guillebeau. The Senate conducted its own exhaustive, comprehensive review of the matter during Gen Hyten's confirmation process to be Vice Chairman of the Joint Chiefs of Staff.”

“General Hyten's confirmation by the Senate as Vice Chairman of the Joint Chiefs of Staff validates the trust that has been placed in him by our nation, our Department's leadership and Congress,” Guillebeau continued.