'We have lost a remarkable and loving husband, father, grandfather and a great American.' 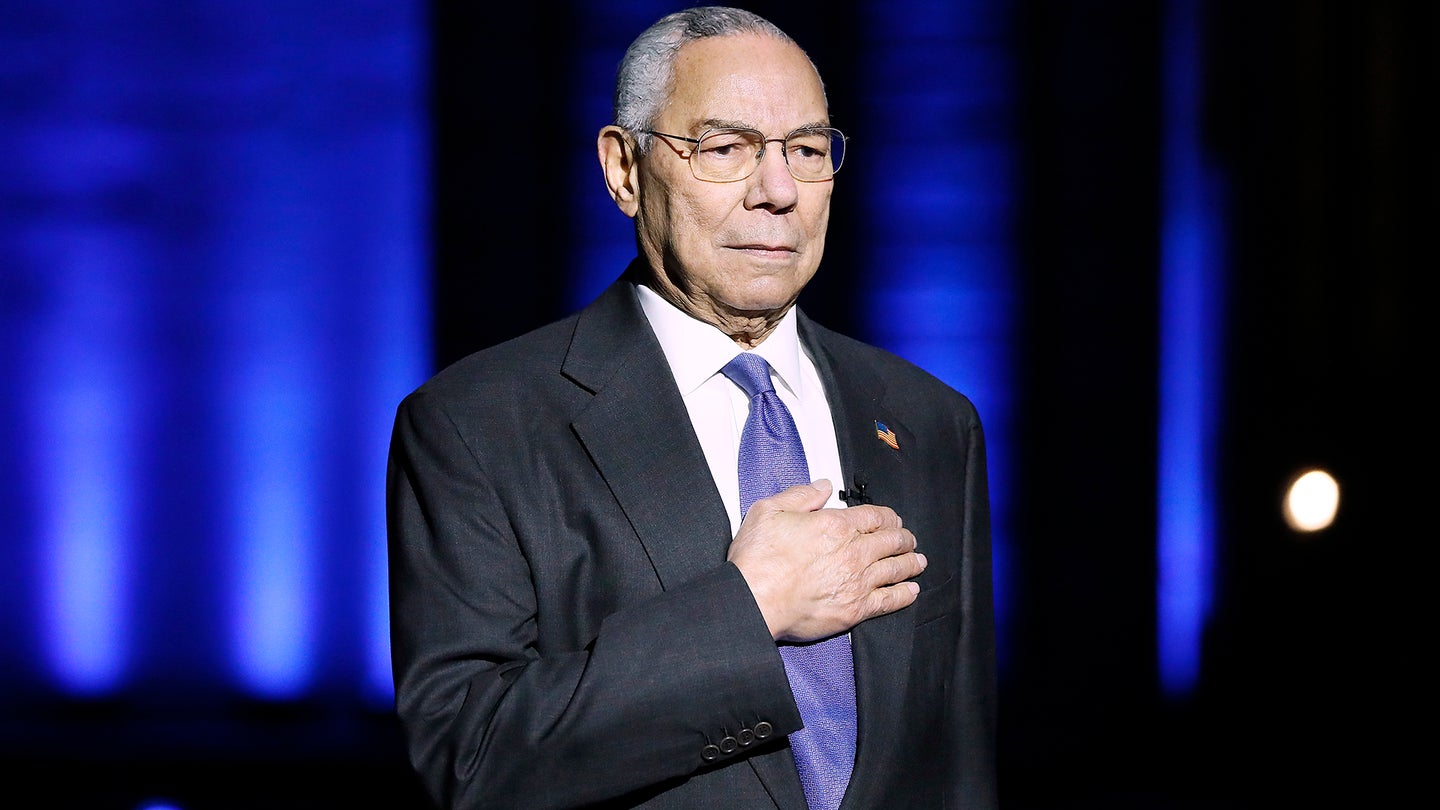 Retired Army Gen. Colin Powell, who served as the first Black chairman of the Joint Chiefs of Staff and later became secretary of state, died on Monday due to complications from the novel coronavirus (COVID-19), his family said in a statement.

“He was fully vaccinated,” his family posted on Facebook on Monday. “We want to thank the medical staff at Walter Reed National Medical Center for their caring treatment. We have lost a remarkable and loving husband, father, grandfather and a great American.”

President Joe Biden recalled working with Powell throughout his years in government. Biden described Powell as his friend and confidant and he recalled the time that both men raced their Corvettes.

“He could drive his Corvette Stingray like nobody’s business—something I learned firsthand on the race track when I was Vice President,” Biden said in a statement.

Biden also praised Powell for his understanding of both military and diplomatic power and his commitment to America’s security.

“Having fought in wars, he understood better than anyone that military might alone was not enough to maintain our peace and prosperity,” Biden said. “From his front-seat view of history, advising presidents and shaping our nation’s policies, Colin led with his personal commitment to the democratic values that make our country strong. Time and again, he put country before self, before party, before all else—in uniform and out—and it earned him the universal respect of the American people.”

Former President George W. Bush issued a statement on Monday praising Powell as a “great public servant” whose counsel many presidents relied on as well as a “family man and a friend.”

A Vietnam War veteran, Powell went on to lead the Joint Chiefs of Staff during the first Gulf War. He later served as secretary of State during President George W. Bush’s first term, during which he helped make the administration’s case that Iraqi dictator Saddam Hussein was producing weapons of mass destruction.

Powell belonged to a generation of military officers whose experiences were informed by their service in Vietnam and who said they were determined to avoid repeating the mistakes that the United States had made in that war.

“When our turn came to call the shots, we would not quietly acquiesce in half-hearted warfare for half-baked reasons that the American people could not understand or support,” Powell wrote in his 1995 autobiography “My American Journey.”

His belief in using “decisive force” to win wars is summarized in the 1992 National Military Strategy of the United States:

“Once a decision for military action has been made, half-measures and confused objectives extract a severe price in the form of a protracted conflict which can cause needless waste of human lives and material resources, a divided nation at home, and defeat. Therefore, one of the essential elements of our national military strategy is the ability to rapidly assemble the forces needed to win — the concept of applying decisive force to overwhelm our adversaries and thereby terminate conflicts swiftly with a minimum loss of life.”

After Saddam Hussein invaded Kuwait in 1990, the United States sent hundreds of thousands of troops to Saudi Arabia, including divisions from Europe – once thought of as unheard of – to rout Iraq troops in a one-sided and brief campaign.

Powell was hailed as a hero for his leadership during the Gulf War. In a January 1991 news conference, he succinctly explained the U.S. military’s strategy to fight the Iraqi army: “First, we’re going to cut it off, and then we’re going to kill it.”

After leaving the Pentagon, Powell was part of a diplomatic team that successfully persuaded Haiti’s military junta to relinquish power after then-President Bill Clinton ordered the U.S. military to invade the Caribbean nation.

Robert Fatton, a Haitian-born historian, recalled that Powell helped get Haiti’s military leaders to step down by telling them: “The troops are coming, the planes are up.”

Powell’s legacy has been complicated by his time as secretary of state, during which he made a 2003 speech at the United Nations that claimed Iraq was secretly continuing its weapons of mass destruction program. In a moment that became infamous, Powell held up a model vial of anthrax to make his point.

In a September 2005 interview, Powell told Barbara Walters of ABC News that his United Nations speech was a “blot” on his record and that it was “devastating” to learn that some members of the intelligence community knew that the evidence of Saddam’s weapons of mass destruction program was not reliable.

He also said the United States had not committed enough troops to the 2003 invasion to secure Iraq after Saddam’s downfall.

Powell remained respected for his service both in and out of uniform for the rest of his life. Anthony Maggert, an Army veteran who lost his leg in Afghanistan, helped Powell change a tire that had blown out as the general was on his way to Walter Reed National Medical Center in 2019.

Before leaving, Maggert took a selfie with Powell that he later sent to the general with a message, which Powell posted on his Facebook page. “Gen. Powell, I hope I never forget today because I’ll never forget reading your books. You were always an inspiration, a leader and statesman. After 33 years in the military you were the giant whose shoulders we stood upon to carry the torch to light the way and now it is tomorrow’s generation that must do the same. Anthony Maggert.”

UPDATE: This story was updated on Oct. 18 with comments from President Joe Biden.