We need to remember and embrace some of the lessons of battlefield excellence that all-black military units displayed during World... 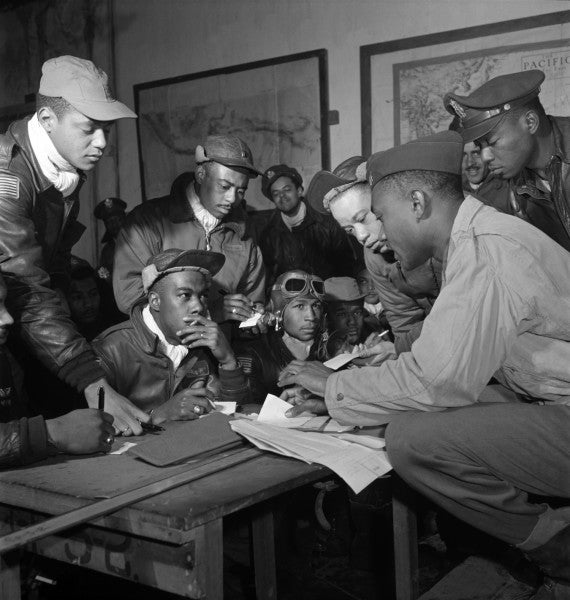 We need to remember and embrace some of the lessons of battlefield excellence that all-black military units displayed during World War II. The perseverance, professionalism, courage, innovation, and sheer guts of all-black military units are significant for a number of reasons. First, the U.S. military was extremely segregated and maintained a structured system of bias toward blacks. Blacks were initially placed in non-combat specialties such as cooks, drivers, and orderlies and they were given second-class equipment and sometimes ineffective combat training. Second, unlike all other military personnel, blacks were told that they wouldn’t and couldn’t be good soldiers.

Even with overt racism in the ranks, over 4,000 African American troops volunteered to fight as emergency infantrymen during the hectic early days of the Battle of the Bulge and were recognized for their superior performance. Today, as we look back almost 80 years from the start of World War II in 1939, we can remember the lessons of these all-black units and apply them to be better in business and in our professional lives.

1. The importance of timely, effective logistics — the Red Ball Express.

We all love the sexy worlds of marketing, advertising, and Wall Street finance. Except, guys behind big desks with spreadsheets do not get food to supermarkets, toys from Amazon to birthday parties, or trash hauled away. Logistics does that.

During the winter of 1944–1945, the Germans launched a devastating surprise attack that came to be called the “Battle of the Bulge” that caught the American Army by surprise. The American Army rallied and began to counterattack with Gen. George Patton’s tank units in the lead.

2. The importance of offense — the 761st Tank Battalion, the Black Panthers.

The Black Panthers with their unit motto, “Come Out Fighting,” was the first all-black tank unit in the U.S. Army. The 761st Tank Battalion served under Patton, whose welcome message was both unbiased and full of expectation:

“Men, you're the first Negro tankers to ever fight in the American Army … I don't care what color you are, as long as you go up there and kill those Kraut sonsabitches,” Patton told them. “Everyone has their eyes on you and is expecting great things from you … Don't let them down, don't let me down.”

The 761st was almost continuously on the offensive, not only in the attack, but during their entire time in Europe. The business lesson: An offensive approach solves problems — don’t wait for your competition to act; make your competition react to you. Great business looks for opportunities to succeed.

3. The necessity of moral courage — The Port Chicago incident.

The Port Chicago incident occurred just north of San Francisco, California, in 1944. Port Chicago served as a naval ammunition loading port where ammunition and other supplies were loaded onto ships to support Gen. Douglas MacArthur’s Pacific naval landings for the island-hopping campaign to capture islands leading to Japan.

Black sailors, who were generally untrained in how to properly load and store ammunition, were made to serve the primary workforce in this dangerous task. As a result, on July 17, 1944, there was a terrible explosion on a ship being loaded with ammunition that killed 320 sailors and injured 390 more. Following the explosion, many of the surviving black enlisted sailors refused to go back to work, fearing another explosion. Eventually, all but 50 returned back to work after being threatened by leadership with charges of mutiny.

The remaining sailors who refused to work, later known as the Port Chicago 50, were convicted of mutiny. However, future Supreme Court Justice Thurgood Marshall, then working for the NAACP, brought the case into the national spotlight, and the 50 sailors were quietly released from prison after serving 16 months. The Port Chicago incident eventually led the military to implement safer procedures for proper training in explosives handling and loading ammunition. One of the sailors charged with mutiny, Freddie Meeks, was the only sailor to have his name cleared before he died. He was pardoned by President Clinton in 1999.

The business lesson: Great business thrives and succeeds on moral and ethical courage. Sometimes you have to stand up to do what is right.

4. The trifecta of excellence: pride, performance, and professionalism — the Tuskegee Airmen.

Eight Tuskegee Airmen in front of a P-40 fighter aircraft.

The Tuskegee Airmen were centered around the designated 332nd Fighter Group and composed of black pilots and ground crew that had been trained in Tuskegee, Alabama. The Tuskegee Airmen were made up of both fighter and bomber pilots who flew combat operations in Europe beginning in early 1944. The 2012 Hollywood movie, “The Red Tails,” highlights the pride, professionalism, and performance of the Tuskegee Airmen as they escorted strategic bombing raids into Germany, ensuring their safe return.

The business lesson: When you deliver a great product or a great service, that’s the only thing that matters. The point is to deliver an excellent customer experience and a high-quality product.

5. Remember the unnamed many — the vital roles filled by black soldiers.

In both the military and in business, it is far too easy to focus on the famous few at the top and forget the unnamed many who made victory possible. After all, black Americans played roles as cooks, drivers, mechanics, warehouse personnel, and many other roles that one may consider unimportant, but in reality, truly made the victory possible.

Look through the U.S. Army’s historical records and you will see black soldiers transporting ammunition in Pacific jungles, driving trucks through Europe, and performing support duties back in the United States.

The business lesson: Everyone in the organization is a vital part of delivering a great product or service. Make sure you are using everyone to their fullest potential and giving them the credit they deserve.

Today, the U.S. military’s treatment of minorities is a stark contrast to what it once was. We need to remember the sacrifice, performance, and lessons of all veterans from our past wars as we look to the future. Their blood, sacrifice, courage, and sweat wrote the lessons of excellence that we need to succeed in today’s global economy. We should always have a special memory for those who were given so little by their country, but managed to give back so much for its defense.