This WWII Naval Ship Was So Unlucky, It Almost Killed FDR

The USS William D. Porter — “Willie Dee” to her crew — was a War World II destroyer, and is... 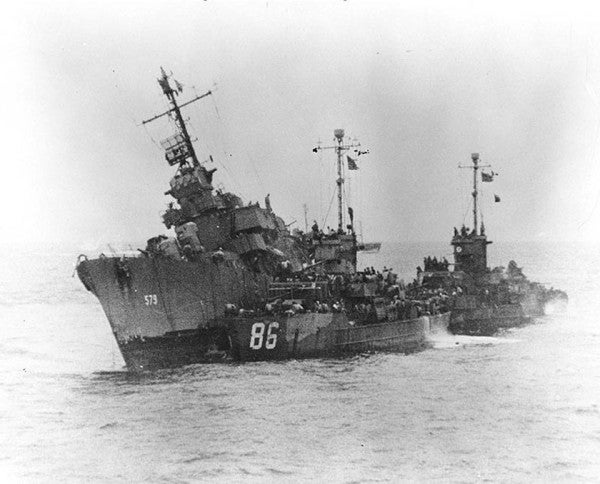 The USS William D. Porter — “Willie Dee” to her crew — was a War World II destroyer, and is arguably the unluckiest ship in the history of the world. She lasted less than two years, until her ill-fated demise in June of 1945, according to a piece originally published in The Retired Officer Magazine by historian Kit Bonner in 1994.

The USS William D. Porter (DD-579) was one of the many war-built assembly line destroyers. Although the ships were small compared to modern-day destroyers, they were formidable forces in their time. Their main armament included 10 fast-running and accurate torpedoes that carried 500-pound warheads, but also included anti-aircraft artillery weapons.

The USS William D. Porter was commissioned on July 6th 1943 under the command of Lt. Cmdr. Wilfred A. Walter. In November of 1943, she was ordered to accompany the battleship Iowa on a secret mission across the Atlantic that the crew of the Porter was told nothing about. The crew members quickly learned its tasks and purposes before setting sail, but clearly wasn’t ready for its upcoming mission — a few days later, they almost killed the precious secret cargo aboard the Iowa — U.S. President Franklin D. Roosevelt, Secretary of State Cordell Hull, and many high-level U.S. military officers.

RELATED: The Incredible Story Of The Men Who Survived A Torpedo Attack, Sinking Ship, Sharks, And 5 Days Lost At Sea »

The series of misfortunes began with the surreptitious order to escort the Iowa to North Africa. The night before she was to set sail, the William D. Porter took out a nearby sister ship when, while backing into the side of this ship, tore down essential equipment with her anchor — including railings and the captain’s gig. The Willie Dee suffered only minor scratches to her anchor, but this marked the beginning of her two-year life of total chaos.

About 24 hours later, the four-ship convoy consisting of the William D. Porter, the Iowa, and two other destroyers had set sail for Africa. All of the ships were under strict orders to maintain total silence as they sailed through the waters that were suspected to contain German U-boats. The ships hoped to quickly and quietly cross the ocean undetected. Not long into the journey, there was a massive explosion that shook the entire small fleet. All of the ships immediately began anti-submarine maneuvering. The chaos continued until Walter admitted that a depth charge had fallen off of the stern of the ship. The safety on the charge had mistakenly not been set, and when it crashed into the rough sea, it detonated.

Soon after accidentally detonating a depth charge, a huge wave smashed into the William D. Porter — thus stripping it of everything that wasn’t tied down — and a man was washed overboard, never to be seen again. As a result of the wave, the engine room lost power in one of its boilers. The mission, which had demanded total silence, turned into an hourly reporting fiasco from Walter to the Iowa.

On Nov. 14th, 1943, the four ships were east of Bermuda when the president wanted to test the defenses of the Iowa in the event that they came under an air attack. The crew of the Iowa launched weather balloons to simulate anti-aircraft targets, and fired over 100 guns. In command of the William D. Porter, Walter, wanting to join in on the fun and redeem himself for the Willie Dee’s earlier episodes, sent his men to their battle stations.

Willie Dee’s crew started shooting at the Iowa’s missed balloons that had drifted toward their ship. Down below on the torpedo mounts, the crew was preparing to take practice shots at the Iowa — which was 6,000 yards away. During live torpedo drills, primers, or small explosive charges, are removed for practice, but one of the torpedomen forgot to remove the primer from one of the torpedo tubes. Just as the torpedo officer ordered the fake firing command, a successfully armed and launched torpedo whizzed across the sea, straight toward the Iowa — endangering some of the world’s most influential figures, including Roosevelt.

According to Bonner, a prominent historian who has studied the Porter, “the next five minutes aboard the Willie Dee were pandemonium.” The crew ran around yelling conflicting orders, and tried to think of the best way to contact the Iowa under their stringent orders of silence. They attempted flashing light signals (indicated in the wrong direction, of course) and then signaled a full speed reverse.

The William D. Porter finally decided that it was necessary to break the mandatory silence, and notified the Iowa in the nick of time. When Roosevelt heard that a torpedo was zooming toward him, he asked to be moved with his wheelchair over to the railing so that he could see it. Fearing an assassination plot, the Iowa turned its guns toward the William D. Porter — however, the crisis ended when the torpedo finally detonated as it struck heavy waves created by the Iowa’s increased speed. Walter reportedly answered with a meek “We did it” when pressed. The entire crew was placed under arrest and sent to Bermuda to face trial — the first instance in U.S. Naval history that the entire crew of a ship had been arrested.

One of the torpedomen, Lawton Dawson, confessed to having accidentally left the primer in the torpedo tube and attempting to conceal the evidence by throwing the primer off the side of the ship. The inquiry proved that the situation was merely a string of unfortunate events and the information was not released to the public. Dawson was sentenced to 14 years of hard labor, and the rest of the crew’s careers were to be ended — but Roosevelt intervened, asking that no punishments be levied on the crew for the series of accidents.

The William D. Porter was assigned to Okinawa, Japan, and finally did a fine job destroying many different Japanese aircraft … oh, and three American aircraft. Those who greeted the ship’s crew often joked, “Don’t shoot, we’re Republicans!” On June 10, 1945, the ship ran out of any luck it ever possessed. When a fully-loaded kamikaze plane — a Japanese bomber constructed mostly from canvas and wood — snuck into U.S. airspace, it attempted to crash into a ship near the William D. Porter. However, at the last moment, it veered away and crashed alongside the Willie Dee. The plane sunk, but still managed to explode underneath of the ill-fated destroyer. This tore open the ship’s hull and caused the ship to sink. In a final twist of much-deserved luck — all of the crew survived.