UNSUNG HEROES: The PFC Who Fought His Way Out Of A Deadly Ambush And Then Went Back

On the morning of April 9, 2004, exactly one year after the toppling of Saddam Hussein, Pfc. Jeremy Church, an... 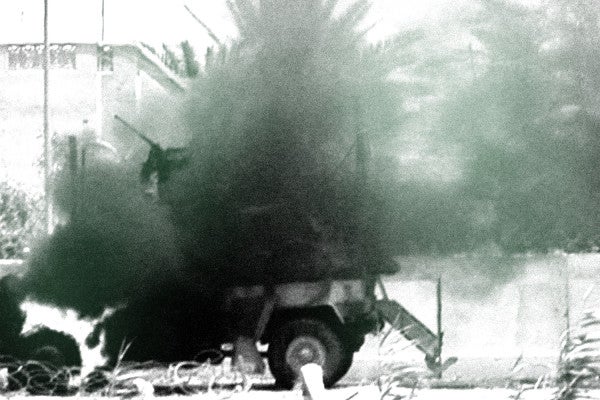 On the morning of April 9, 2004, exactly one year after the toppling of Saddam Hussein, Pfc. Jeremy Church, an Army Reserve soldier with Wisconsin’s 724th Transportation Company, was driving the lead vehicle of a 26-vehicle convoy from Balad to the airport in Baghdad that included 17 fuel trucks operated by defense contractor KBR. It was an emergency fuel mission, but nothing too out of the ordinary. The unit had made the trip many times before. But about five miles from the airport, Church and the other soldiers began to realize that something was off: The road, which was usually bustling with traffic, was empty.

What happened next would go down as one of the deadliest battles involving an Army transportation unit during the entire Iraq War. By the time the dust settled, two soldiers and five defense contractors were dead, more than a dozen were wounded, and a total of four Americans were missing. But it could’ve been worse had it not been for the courage and quick thinking of a young Army private. For his heroic actions that day, Church would eventually be awarded the Silver Star.

The Good Friday Ambush, as the event came to be known, began with a barrage of small-arms fire and rocket-propelled grenades that intensified as the convoy snaked its way through a series of obstacles that were placed in the middle of the road to slow it down. In the passenger seat of Church’s Humvee was 1st Lt. Matt Brown, who later described the moment the shit hit the fan to an Army reporter, saying, “it was so noisy, we couldn’t talk; it was truly chaotic.” The incoming rounds were deadly accurate. Within minutes, one pierced the windshield, striking Brown’s helmet just inches above his eye. Then two IEDs detonated successively alongside the Humvee, shredding a front tire.

As Church struggled to control the Humvee with one hand, he leveled his M-16 out the window with his other, firing at the enemy as he drove. Brown was alive but severely wounded, and the IEDs had injured another soldier in the vehicle, a sergeant. So the responsibility of leading the convoy out of the kill zone fell on Church’s shoulders. He drove for four more miles under fire before reaching a security perimeter that been established by another Army unit. Meanwhile, in his wake, the battle raged on.

“I knew I had the entire convoy behind me, and I knew they were following me,” Church told the Army reporter. “They needed me to get them out of there.”

Church rallied some other soldiers and headed back into the fray. Several days before, on April 5, the radical cleric Muqtada al Sadr had declared jihad on coalition forces. Now, about 200 members of his militia were raining hell on the American convoy. Under heavy fire, Church began treating and triaging the casualties, including one soldier with a sucking chest wound. He and another soldier volunteered to stay behind while the wounded were being evacuated, and their position was soon approached by two insurgents. Church raised his rifle and killed them both. Only then was he pulled out of the fight.

Amid the chaos that day, a total of four Americans — three civilians and one soldier — were abducted by the enemy: Tommy Hamill, William Bradley, Timothy Bell, and Spc. Keith Maupin, who had served with Church in the 724th Transportation Company. Twenty-seven days later, Hamill managed to escape his captors. Bradley’s remains were found in 2005, and Maupin’s were located in 2008. Bell’s fate remains a mystery, but he was declared legally dead in 2010.

According to his Silver Star citation, Church is credited with saving the lives of five soldiers and four civilians. In 2005, he became the first Army Reserve soldier to earn the award in the Global War on Terror.