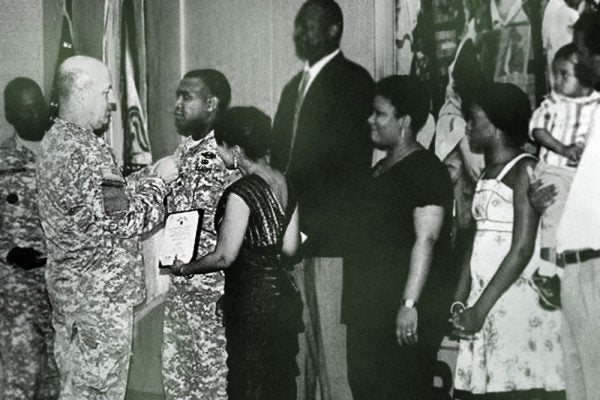 On July 13, 2008, Army Spc. Aaron Davis and his unit were attacked by more than 200 Taliban fighters while they were on patrol in Kunar province, Afghanistan.

Davis was an infantryman assigned to the 2nd Battalion, 503rd Infantry Division, the group was tasked with guarding an unfinished patrol base outside the village of Wanat.

According to the Army, Davis and his platoon engaged the 200 insurgents in a heavy firefight.

Serving as an anti-armor gunner at the time of the attack, Davis was riding in the truck that was hit by a rocket-propelled grenade. With the truck destroyed, Davis found himself unarmed, but he was still determined to help his platoon.

However, in trying to find a weapon, Davis sustained a shrapnel injury to his right leg from an exploding rocket-propelled grenade.

He ignored the would, and instead remained in the midst of the fight, helping to save the lives of three fellow soldiers who were severely injured.

Related: UNSUNG HEROES: This soldier took a bullet to the head and kept fighting »

“I wanted to help those who had more severe injuries than I did,” Davis later said, according to an Army report.

Finally, a medical evacuation helicopter arrived to care for the critically injured soldiers.

However as he returned from the helicopter, Davis was hit by a second RPG.

This time, the shrapnel cut into his left arm and right eye.

“Blood was everywhere, I couldn't see, I was hurting everywhere,” Davis said. “I didn't want to leave the premises or leave my comrades, but this time I had no choice.”

For his efforts and injury, Davis was awarded the Silver Star and a Purple Heart, though he initially refused.

“I felt like I didn’t want all the attention because I didn’t do anything for attention,” Davis added.

Overall, 26 members of the platoon were injured, and the firefight resulted in the deaths of 20 to 50 Taliban fighters.

Referred to as The Battle of Wanat, the event triggered three investigations, including one ordered in September 2009 by Army Gen. David Petraeus, head of U.S. Central Command at the time. This was the same battle for which Staff Sgt. Ryan Pitts was awarded the Medal of Honor.