For Ryan Pitts, the Medal of Honor is a reminder of the sacrifices made by the 48 American soldiers he... 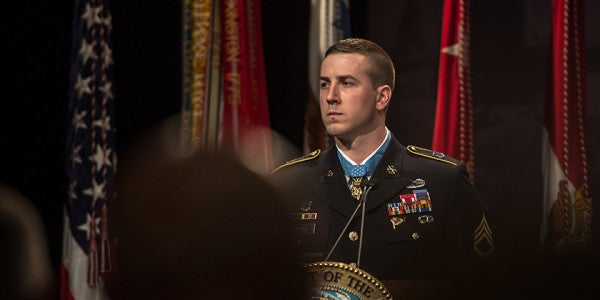 For Ryan Pitts, the Medal of Honor is a reminder of the sacrifices made by the 48 American soldiers he fought alongside during the Battle of Wanat.

On July 13, 2008, while deployed to Kunar province, Afghanistan, with Chosen Company, 2nd Battalion, 503rd Infantry Regiment, Pitts participated in a battle where Taliban fighters launched a major assault on a small U.S. Army patrol base.

Nine American soldiers were killed in the attack and 27 wounded, including Pitts, a sergeant at the time.

The battle began around 4 a.m. when Vehicle Patrol Base Kahler near the village of Wanat came under attack from approximately 200 enemy combatants armed with mortars, heavy machine guns, and rocket-propelled grenades. While the attack was focused on the patrol base, Pitts’ position at Observation Post Topside bore the brunt of the attack.

In the first 30 minutes of the battle, most of the soldiers at Topside were incapacitated, and Pitts was injured after a wave of rocket-propelled grenades slammed into their position. Despite his severe injuries from shrapnel wounds to his arms and legs, he fought on. Pitts rotated between manning a machine gun and cooking off grenades, which means holding them long enough so that when they are thrown they detonate before they can be thrown back. He continued to call in situation reports even when the enemy was close enough for him to hear voices.

Despite being close to unconsciousness, Pitts continued to communicate with the unit’s headquarters, and called in danger close strikes within 10 meters of his position. An hour and a half after the attack began, a casualty evacuation crew landed under enemy fire to retrieve the wounded. Pitts was medically evacuated along with several others, while the remaining soldiers and recently arrived reinforcements continued to fight off enemy forces for several more hours before Observation Post Topside and Patrol Base Kahler were finally secured.

Pitts was medically discharged in 2009 and almost immediately after leaving the Army began attending college at University of New Hampshire at Manchester. He graduated in 2013 and now works in business development. On July 21, 2014, Pitts was awarded the Medal of Honor and is one of 11 living recipients from the war in Afghanistan to receive the military’s highest award for battlefield bravery. Pitts is also the third recipient of the medal of Honor from 2nd Battalion, 503rd Infantry Regiment, alongside Salvatore Giunta and Kyle J. White.

When Pitts recounts the events of that day, his retelling doesn’t focus on his actions. He speaks almost entirely about the men he fought alongside, men who time and time again, ran through enemy fire to come to his aid.

Pitts spoke with Task & Purpose about what it’s like to retell the story, how his perspective has changed since that day, what it means to serve in combat, and the value of military service.

After you received the award, how much of your time was spent talking about the event?

So I was awarded it in 2014, and so day to day, it’s really not that much. I’d say monthly it depends because it’s still evolving. I work a nine-to-five job and it’s just kind of as I can fit stuff in there’s certain things that take priority — that I want to go talk about.

For me, top of my list is the traumatic brain injuries and post-traumatic stress for veterans, kind of those invisible wound type things. You know, my perspective is, it’s just raising awareness about the resources that are out there and just encouraging vets that if they need to go talk to somebody, go do what they have to do to live the lives that they’ve earned.

When you speak as a Medal of Honor recipient, can you describe what that experience is like?

I mean it varies. I’m still getting used to it, right? I’m always okay talking about the guys. I look at it as an opportunity to highlight what everybody around me did. We were all doing the same things. Everybody was just doing their jobs, myself included. I didn’t do anymore than anybody else, but I was the one that received the award so my story gets told, but I see it as a responsibility to tell all the guys stories because there was valor everywhere that day and especially to talk about the guys that didn’t come home. So I think since it’s happened, it’s gotten easier to tell that story. It’s not as emotionally draining as it used to be. You know I guess it feels good when I get to tell people about the things that Jason Bogar did: saving my life putting a tourniquet on my leg. Or Jason Hovater or [Jonathan] Brostrom making a suicide run from the vehicle patrol base to our OP, and just highlighting that this was really a team effort. While it’s maybe one of the more difficult things to talk about emotionally, it’s one of the easiest things to find the words when I talk about the guys.

Every time I talk about it and hear the narrative told, I can see those events kind of again. You kind of almost relive it, not vividly, but it takes me back and my mind goes through the whole day again. It’s not upsetting, but it’s just somber.

Would you say that’s hard to do? As you’ve done it more, has it gotten easier or has your perspective changed on telling the story and how you view it?

Yeah, I think it was hardest first because my mindset was that I’m receiving the award, and then my mindset changed over time to that I’m just accepting it on behalf of the guys. It’s ours. And I bet that every other recipient will tell you the same thing: that it is a team effort and nobody did anything on their own. I think that’s what’s made it more manageable to do, to talk about because it’s not about me. It’s about the team, it’s about the guys. So if I have an opportunity to talk about what everybody did, and really to talk about what all service members are willing to do, that’s my responsibility.

After you learned that you would receive the Medal of Honor, what was your reaction?

I was pissed off. I wasn’t happy about it because I didn’t feel like I deserved it. You know we lost nine guys that day. It’s hard to feel like you deserve anything when there’s nine guys you didn’t bring home, and a number of guys died in a position I felt responsible for, and I didn’t see how I deserved it. I didn’t feel I did anything differently from anyone else who didn’t come home. I wasn't the only one to fight wounded — everyone that could was. Like I said, it comes back to that mindset of initially hearing you’re being awarded and you think it’s about you, and it’s not.

It’s been a process to change my mindset to understand, or I think accept that it’s not about me, it’s ours. It’s the guys who didn’t come home, it belongs to them more than anyone else. They brought me back, as did a bunch of the other guys that came home. Now it’s just a responsibility to make sure that they’re all recognized whenever the opportunity presents itself.

I think also for me it was always enough to know what we did together. There’s always been a part of me, that feels like that experience, you know whatever we’ve experienced together, me and my battle buddies in combat, that’s private. You know, it was ours. There was always a part of me that didn’t want to share it with other people because I didn’t feel they had a right to know.

Do you ever feel like you’d just rather not be in the limelight?

Yeah, all the time. I mean it’s not enjoyable. But being able to do things for other veterans, being able to shed light on the story, it’s an opportunity where I don’t get to just talk about that day, I get to talk about other things I’d seen over the course of the deployment. To me it just highlights the sacrifice that veterans and service members make. Really, highlighting that it’s all just a team effort.

I guess the part of being private. I looked up to a lot of the leaders and guys I served with, that were just quiet professionals: “Those that don’t, talk about it. Those that do, don’t.” I always admired that and looked at it as that’s the way I wanted to try and be. That’s why I looked at our experience as being private. There was no reason to talk about it with other people. We talk about it. I get together with all my buddies and we talk about the stuff we’ve been through, but we don’t go telling stories to other people. It was just enough that we know what we did, we know what we mean to each other, and that was enough for us.

Medal of Honor Recipient Ryan Pitts makes his remarks during the Hall of Heroes Induction Ceremony at the Pentagon, in Arlington, Virginia on July 22, 2014.U.S. Army photo by Staff Sgt. Mikki L. Sprenkle

One of the things that comes up sometimes is people are like: “Thank you for your service, I didn’t serve like you did. I didn’t see anything like that,” but I’m like, I don’t know what you saw, and I’ll never compare Wanat or any other firefight I’ve been in to anything else anybody else has ever been in. I wasn’t there and didn’t feel what they felt, but they all have merit. And even those people who serve in peacetime, they were willing to sign the dotted line and answer the call for their country. You don’t get to choose how and where you serve, you just do what you’re told. I look at everybody’s service as equal, whether you served in combat or not.