What Trump Got Wrong About Veterans Suffering From Chronic Pain

On Sept. 7, during the Commander-in-Chief Forum in New York, a woman in the audience asked Donald Trump what he’d... 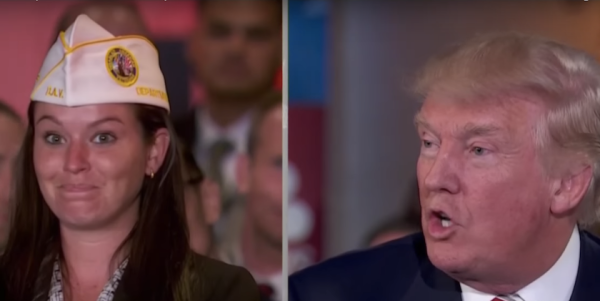 On Sept. 7, during the Commander-in-Chief Forum in New York, a woman in the audience asked Donald Trump what he’d do as president to “stop 20 veterans a day from killing themselves.” That woman was Rachel Fredericks, a Marine Corps veteran who was injured in training while serving as an aviation operations specialist and now helps other veterans file disability claims with the VA as an employee of Disabled American Veterans.

Fredericks scowled when Trump fired back with a correction:“Actually,” he said, “it’s 22.”

When we talk about the problem of veterans suicide, we typically do so in terms of how many veterans die by suicide each day. According to a Department of Veterans Affairs study released in July, 20 of the roughly 22 million veterans of the U.S. armed forces died by suicide every 24 hours in 2014. Fredericks was right. Trump was wrong. And the internet exploded.

But Fredericks, a Republican, was less put off by the fact that Trump wasn’t abreast of the latest numbers on veteran suicide, and more by the fact that he didn’t offer any real plan of action — or at least one that made sense to her.

“We are going to make efficient and good,” Trump said, playing into widely held assumptions that there’s a direct correlation between poor health care provided by the VA and the high suicide rate.

However, it was when Trump deviated from the standard narrative, suggesting a link between physical pain and the sort of mental anguish that drives a person to suicide, that Fredericks concluded that the Republican nominee hadn’t done his homework. “A lot of it is that they’re killing themselves over the fact that they’re in tremendous pain and can’t see a doctor,” he said.

“I just think that with him not being a veteran and with him not living in chronic pain, that he doesn’t understand that many of us are living with it on a daily basis,” Fredericks told Task & Purpose. “If veterans with chronic pain were committing suicide, I think the number would be a lot higher.”

Task & Purpose spoke with Fredericks about why she disagrees with Trump’s assessment of the veteran suicide problem, and what he and Americans in general should understand about veterans who suffer from chronic pain.

Why were you unsatisfied with Trump’s response to your question about veteran suicides, aside from the obvious fact that he misquoted the numbers?

I work with veterans on a daily basis filing their claims for disability, and here in New York at least, we’re not having access issues. We’re getting access to the VA. We’re getting mental health help. The reason why I was dissatisfied with his response was because, in my opinion, we were pointing the finger at the VA. I asked what his plan was and I don’t feel as though he provided a plan that was actually set forth to reduce the number of suicides. So, we talked about the access, we talked about the care, and we talked about the mental health unit. I didn’t feel as though that was an actual direct plan of what he plans to do as president to actually stop the suicide.

Many people know that there are breaks in the system, and no system is perfect; however, I feel like he didn’t give us any hope for what he plans to do as president. Yes, I agree that the VA needs some fixing. Yes, I agree that mental health needs more focus. However, I wanted to know his particular plan of what he plans to do as president if he’s elected. What does he plan to do to make a difference in the rate of veteran suicide?

Do you think he was implying that people who suffer from chronic pain are more inclined to take their own lives?

I think that was his implication; however, being a disabled veteran myself and working with disabled veterans on a daily basis, the majority of us are living with chronic pain on a daily basis. And I don’t think the majority of those who are committing suicide are because of their chronic pain. I would agree that it’s because of mental health illnesses. But I’m in disbelief that these veterans are in pain and killing themselves. Here in New York at least we have plenty of access to pain management, and we have plenty of access to the VA. We also have the mental health access. I don’t feel, personally, that chronic pain is the cause for all of these suicides. It may be the cause for some, but I don’t think it’s the major cause of why we have such a large number.

So you disagree with the idea that it’s a matter of veterans being in physical pain and not being able to gain the access they need to treat that pain and then turning to suicide as a desperate solution?

I do agree that for some veterans it’s the case, but I don’t think that chronic pain is the only reason, or even a big reason why veterans are killing themselves. I would lean more towards it being the mental health care and the need for outreach that is not available.

What doesn’t Trump understand about veterans who suffer from chronic pain?

I think the number would be a lot higher if chronic pain was the actual cause. It might be part of the cause but I don’t think that it’s the majority cause of suicide. I think there are underlying items. I think it also has a great reflection on the mental health department. And something else that I mentioned was the stigma, and I mean the stigma of how we’re talked about. Trump used the term “they” over and over again — “They need help.” Obviously, us veterans know that we need help. A lot of veterans don’t step forward and attempt to get help because they feel stigmatized. I wasn’t saying that Trump was stigmatizing veterans. I was saying that a lot of veterans don’t like the stigma surrounding having a mental health illness.