What Happens When A Veterans Charity Gets Political With Trump For Money? 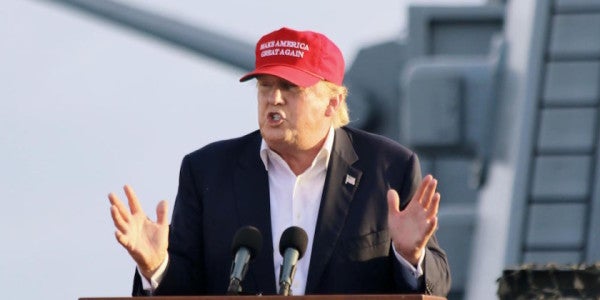 When representatives from various veteran service organizations joined Republican presidential candidate Donald Trump at a Jan. 28 rally in Iowa, they faced a mix of backlash and support. However, in the end, at least one got what it wanted out of it: funding.

In an editorial for The Hill published April 7, Cliff Sosamon, the executive director of Honor Courage Commitment, Inc., responded to criticism his organization and its subsidiary, 22KILL, received funding after appearing alongside the Republican frontrunner. The group aims to raise awareness about veteran suicides.

According to Sosamon, the organization’s presence at the rally was a means to an end and did not indicate that they in fact supported Trump’s policies.

“What those individuals fail to realize is that first and foremost, as a 501(c)(3) nonprofit organization, we cannot, and will not, support any candidate running for elected office. It is a violation of IRS rules and regulations, not to mention our own code of conduct,” he writes.

Shortly after the segment aired, the organization’s website crashed from a flood of traffic, which Sosamon argues was the whole point of appearing alongside the candidate. As a direct result of their appearance at the Trump rally, the organization received $200,000.

In a phone interview with Task & Purpose Sosamon explained that the funds came from the Stewart J. Rahr Foundation and were given to 22KILL at the direct request of Trump.

Related: The problem with Donald Trump’s plans for the military »

By Sosamon’s own admittance, the group needed to raise more money and leveraged its appearance alongside Trump to gain exposure.

“The second thing those people fail to realize is that running a nonprofit organization and providing services for our nation's veterans takes money,” writes Sosamon. “From an organizational standpoint, we are happy to accept funds from any individual or group willing to support our mission and benefit veterans.”

However, the increased traffic wasn’t entirely positive, and the organization faced backlash from those who criticized its support of Trump.

“Almost immediately, we began to receive emails and social media replies both supporting the mission and also asking why we would support Trump, or why we would consider accepting funds from his rally.”

According to Sosaman, the organization will accept funding from any group that support veterans. “We do not care if the funds come from the left or the right, from Republicans or Democrats, conservatives or liberals … All their money is the same.”

22Kill was one of 22 veterans organizations named a beneficiary of the Iowa rally; however, it is unclear how many of the groups actually received money as a result of the event.

“It’s not a political issue, it’s not a left or a right issue, it’s a veteran’s issue,” Sosamon told Task & Purpose.