Suicide Is More Than Just A Veteran Problem

No number is as wrought with consequence in the veterans community as 22, which has become a rallying cry for... 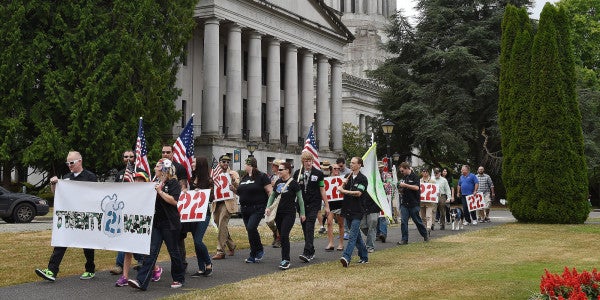 No number is as wrought with consequence in the veterans community as 22, which has become a rallying cry for a wide range of groups and concerned individuals seeking to reduce the daily veteran suicide rate. At the same time, no number is so misleading or misunderstood.

On April 22, the Centers for Disease Control and Prevention’s National Center for Health Statistics released a new study that reinforces that the suicide crisis in America is not limited to veterans. Over the last 15 years, researchers found, the national suicide rate has risen by 24%, surging across nearly every age group and demographic. In 2014 alone, 42,773 Americans died by suicide.

Related: The truth about 22 veterans a day »

“Suicide is not just a mental health issue,” one CDC scientist told the Huffington Post, “it is a public health issue, and it is preventable.”

To prevent suicide most effectively, it must be discussed and treated holistically, not partitioned within subsets of the population.

In the context of these new findings, it is important to remember three important things about veteran suicide:

The new CDC study shows that suicide is most common among middle-aged white men. VA research has found the same to be true in the veterans community.

Yet because the majority of campaigns and initiatives to address veteran suicide are run by post-9/11 veterans, they invariably are designed and promoted in ways that reach post-9/11 veterans. A review of the websites of several groups working to prevent veteran suicide — such as 22KILL, Mission 22, Stop Soldier Suicide and the National Veterans Foundation — show that they do not effectively explain which veterans are dying by suicide, and commonly utilize photos of younger veterans as visual illustrations.

By focusing on 22 — a single, clean number — and attempting to give it the ice bucket challenge treatment, some activists are oversimplifying the issue and encouraging magical thinking.

The authors of the 2012 VA report that generated the estimate of 22 veteran suicides per day warned, “estimates of the number of Veterans who have died from suicide each day based on proxy report of history of U.S. military service should be interpreted with caution.” Co-author Robert Bossarte, head of the VA Office of Public Health’s epidemiology program, later said, “It’s not that I oppose the number 22 but it’s frequently not contextualized. So we focus on that number rather than what’s really happening within that number.”

The VA is conducting new research that will hopefully lead to more precise estimates, yet reshaping public awareness will be more difficult now that 22 has taken on totemic importance.

No one benefits when we treat veteran suicide differently from the American suicide crisis. As noted previously, there are strong commonalities linking middle-aged Americans — veteran or not — when it comes to suicide. Suicide by Americans in their 40s, 50s and 60s, research has found, is closely linked to rising distress about jobs and personal finances, issues that have little to do with a history of military service.

Even as veteran advocates worry about the supposed 22 veteran suicides per day, the VA’s 2012 report found that veteran suicide rates had remained constant or decreased slightly in the states studied, while civilian suicide rates were clearly increasing, an assertion borne out more recently by the CDC.

It’s time to recognize and appreciate that suicide is a national problem. Many triggers of suicidal ideation and action are results of life in America, not life at war, and cannot be addressed solely through veteran-focused initiatives.

Veteran suicide — and service member suicide — is a very real and enduring problem. Veterans do die by suicide at higher rates than non-veterans, and recent research found that suicidal thinking is depressingly common among veterans.

A move to shift the discussion away from a fixation with 22 and place veteran suicide within the context of a broader American problem does not require a move away from solutions veterans have already created to support their brothers and sisters in arms. Formal and informal support networks — when combined with access to professional services and treatment — are invaluable safety nets for ensuring that troubled veterans have people looking out for them.

Americans who have been to war and Americans who have never left their city of birth are taking their lives at unacceptable rates. The CDC report reinforces that veteran suicide is not an unique phenomenon, and should not be viewed through a different lens than civilian suicide.