After Navy veteran Jack Holder, had his life savings stolen in a sweepstakes scam, a GoFundMe page created in his... 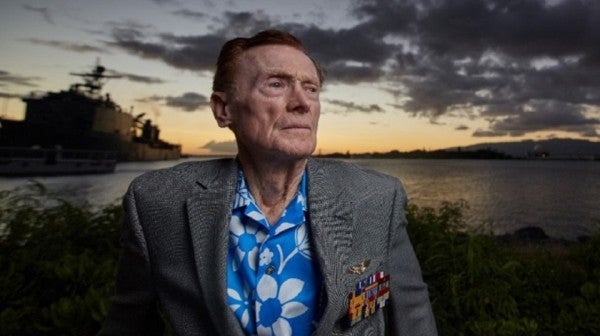 After Navy veteran Jack Holder, had his life savings stolen in a sweepstakes scam, a GoFundMe page created in his name raised enough money to cover his losses, with some to spare.

According to The Arizona Republic, the 94-year-old Pearl Harbor survivor from Sun Lakes, Arizona, received a phone call in March telling him he had won Publishers Clearing House Sweepstakes and would receive $4.7 million, as well as a new Mercedes Benz. First, he just needed to provide some personal information and open up a new bank account.

The scammers then told Holder he had to pay taxes before he was given his prizes, and so he and his fiancée wrote several checks totalling $43,000.

Within a week, the thieves made off with the money.

“This was the worst day of my life,” Holder told The Arizona Republic, and that says a lot, considering all he’s gone through.

Holder was stationed at Pearl Harbor as a flight engineer when the Japanese military attacked on Dec. 7, 1941. The following year his flight crew took part in the Battle of Midway, and later served in the skies over Guadalcanal and the Solomon Islands. In 1943, while stationed in Devonshire, England, Holder flew 56 missions over the English Channel and engaged German war planes in aerial combat. Holder also lived through a plane crash in the 1960s that left him hospitalized and lost his wife of 69 years to Alzheimer’s disease in 2014.

After reading The Arizona Republic’s coverage of Holder, Shana Schwarz from Gilbert, Arizona, was moved by the story and decided to create the crowdfunding campaign in his name.

“I’m out of work right now,” said Schwarz. “I only donated $25. But I knew I was good with fundraising and I am good with social media. So that’s what I did.”

Schwarz and Holder met for the first time on Memorial Day when she gave him the first installment from the campaign — $19,000 — with the rest to follow.

Since then, Schwarz has transferred control of the campaign to The Greatest Generations Foundation, a nonprofit veterans organization based in Denver, Colorado.

To date the campaign has raised more than $62,000 for Holder.

“I’m at a loss for words,” Holder said told The Arizona Republic. “How in the world will I ever repay people for their graciousness?”