What Happens When Pilots Aren’t Allowed To Fly

Lately there have been many articles and reports about the services in general, and the Marine Corps in particular, reducing... 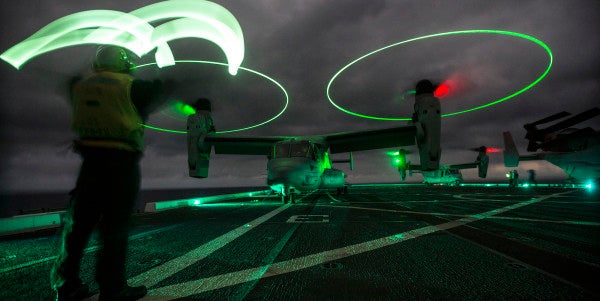 Lately there have been many articles and reports about the services in general, and the Marine Corps in particular, reducing stateside training hours for aviators.

The reasons for this are varied. Long story short, resources are limited, and a disproportionate share are going to the fight against ISIS and other overseas operations. This means that for those not actually on deployment, there’s not much flying going on. Many pilots are getting fewer than 15 hours a month, and some are getting less than 10.

When I started flying in the Marine Corps two decades ago, pilots assigned to line units regularly got about 30 hours per month. That gradually dropped to 20. With 30 hours, one steadily improves. With 20, one is at least confident in fundamental skills. With 15 and below, one is just focusing on the bare essentials.

Once a pilot goes below about 15 hours, his skills start to atrophy. The fundamentals of flying, which need to come naturally, require conscious thought when a pilot hasn’t been in the air enough. So of those limited hours, many have to be spent just practicing takeoffs, landings, and instrument approaches. Every pilot is required to get prescribed numbers of these essential tasks at regular intervals. Those flights aren’t just administrative, they’re essential. Aviation is a dangerous business, even without bad guys shooting at you.

Other military jobs are dangerous in a combat zone. Military aviation is dangerous all the time. If you can’t bring the aircraft back home at night or bad weather, then the enemy doesn’t even have to work. Practicing the fundamentals is essential. But military pilots don’t just fly from point A to point B. They’re expected to do important and demanding tasks in-between, like picking up troops or dropping bombs. The bare minimum does not maintain adequate proficiency in those skills without compromising either mission accomplishment or safety.

RELATED: Why the Osprey is the future of the U.S. military »

Some may wonder whether the extra flight time these pilots get while deployed makes up for the deficit incurred stateside. It does to a small extent. Pilots often catch up a little on flight hours while deployed. Modern simulators also make up from some of the shortfall, but there’s a huge difference between playing a videogame of landing an aircraft in the dust and actually doing it. Just like in football, one can’t just just practice like a madman for a few months, then play Madden 17 for the rest of the year, and expect to complete at a high level.

And competing at a high level is, or will be, the problem. As much as President Obama was criticized for saying ISIS was the JV team, as far as aviation goes, it is. It has no real air force or integrated air defense system, which was also true of the Taliban in Afghanistan and of Iraqi insurgents. While the U.S. is blessed to have a large contingent of combat experienced aviators who at know what it’s like to see tracer rounds travelling the wrong direction, that experience has come at the price of not practicing for tougher foes and tougher mission sets.

While there have been many individual missions that have required exceptional skill and heroism, the bulk of combat aviation sorties since 9/11 have been missions such as “battlefield circulations” for assault aircraft, i.e. moving people and stuff from base to base. Other platforms have similar woes. Many a fighter pilot who thought he’d be dogfighting MiGs has instead found himself working as a JDAM truck driver when he’s not flying a “manned UAV” providing ISR (Intelligence/Surveillance/Reconnaissance) via a Lightning pod or similar system.

What they aren’t doing is practicing missions with large flights of multiple aircraft types or against enemies with “double digit” surface-to-air missiles. While deployed, the military has to do the mission, whatever that is. Back home, the mission should be to rest, recover, refit, and prepare for the next fight or potential fight.

When the number of hours is barely enough to sustain proficiency in the basics of all-weather flying and landing, it’s laughable to think pilots will get really good at the more demanding mission sets. On top of just maintaining the basics, aviators stateside also have to support tasking from higher headquarters, ranging from the useful, such as helping the infantry train, to the useless, such as supporting “dog and pony” shows for communities or dignitaries.

A few pilots, either the best, or those who their commanders like the most, depending on who you ask, will get to practice massive missions at advanced training such as the Weapons and Tactics Instructor Course at Marine Corps Air Station Yuma, Arizona.

The rest of the herd get the minimums to keep the crew legal to fly their assigned missions. That comes with a price in both safety and mission accomplishment.

Beyond those, the real cost is in the long term. Doing the minimum in aviation training is like paying the minimum on your credit card. You can live large for awhile, going to parties like the one with ISIS. Eventually the bill gets bigger and bigger, and you end up either limping along for years, never able to get ahead, or going broke when you can’t even afford the minimum.

Typically In Marine aviation, a new pilot checks in as a first lieutenant or new captain, does a deployment or two, then ends up as an instructor to the next crop of new pilots. That now mid-grade captain is expected to be at his most proficient at tactics, able to lead the most difficult missions and train the next group of lieutenants.

If most of those captains barely get the minimums stateside, then spend their deployments schlepping cargo from base to base, the next generation doesn’t get mentorship and flight leadership knowledge passed on to them. And if that group only gets the minimums, too, then…

Those captains eventually go off to a school, or a staff job, or whatever. They come back as majors, who are now neck-deep in administrivia running operations or maintenance, and who fly the minimums, or maybe even less, because they’re too busy dealing with making quad slides in PowerPoint for their commander to show his commander. Besides, the captains are supposed to handle most of the actual flight training, right?

Eventually, the Marine Corps will be left with squadrons full of pilots who are salty enough from combat service to attract wild deer, but who worry about the basics, like doing shipboard landings.

When I started in Marine aviation, the old guys, the lieutenant colonels and colonels, often had four or five thousand hours of flight time, sometimes more. By the time I left, I was considered an unusually high-time pilot with only about 3500 hours. Those behind me are on a pace for far less.

The Marine Corps will never cry uncle on its assigned missions overseas. That “will do” mentality has kept the Marine Corps in good stead for 240 years now. But when what it physically “can do” falls short of what it will do, something is going to break. The nation’s leadership in the White House and in Congress either need to give Marine air more or ask less of it, or the broken something is likely to be many multimillion dollar aircraft and their crews.