Should Cyber Warfare Have Its Own Branch?

In 1947, the U.S. defense establishment finally recognized that airpower was an environment distinct and separate from sea or air.... 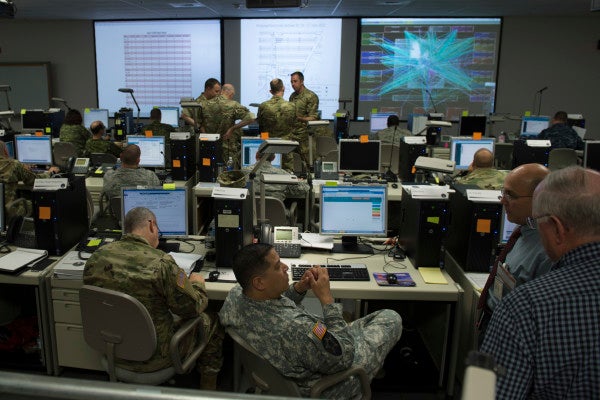 In 1947, the U.S. defense establishment finally recognized that airpower was an environment distinct and separate from sea or air. It required specialized knowledge and training, as well as a service culture that did not subordinate airpower to other functions within that service. The U.S. Air Force was created as a separate, independent service.

The other services retained air arms devoted largely to their respective tactical and operational needs, such as the Marine Corps’ and Army’s close-air support. The Air Force was responsible for the big picture, aviation in general support and for strategic airpower, including the nuclear bomber and intercontinental ballistic missile forces.

Those lines have been blurred, redrawn, and blurred again over the past half-century, but the paradigm has generally worked well. This was especially true during the Cold War, where air power from missiles and bombers was the center of gravity for the decades-long standoff.

In the 21st century, cyber warfare has become a center of gravity, especially in the operations-other-than-war which define today’s multi-polar world. Wherever bullets and bombs aren’t flying, electrons are. Though the U.S. never dropped bombs on Iran, it delivered a critical blow against its nuclear infrastructure by means of the Stuxnet computer virus. Similarly, enemies of the U.S. such as ISIS try to damage American interests by using cyberattacks. Just as airpower was during the Cold War, cyber warfare is becoming the instrument of perpetual standoffs between the U.S. and potential adversaries such as China and Russia.

RELATED: How the U.S. should respond to cyber attacks »

As much as I respect the soldiers, sailors, airmen, and Marines holding the fort down in the cyber battlefields today, we can’t delude ourselves into thinking we’re getting anywhere near the top performers in the field. The military has some of the toughest individuals in the country in its combat arms and special operations forces. It has some of the best pilots in the country flying its aircraft. But the nation’s top young computer scientists are not swarming to the armed forces, despite some of the biggest bonuses in the military.

Why would they? While the military’s system of starting at the bottom, doing scut work for years, and gradually working up a hierarchy is a great system for building the character and leadership needed to take a hill, but it’s also not conducive to innovation in the way the computer science field typically operates.

The military services can attempt to change to accommodate this. The Army considered softening its fitness standards for cyber troops. Secretary of Defense Ash Carter is looking at allowing individuals to enter the military at high ranks. Much of his rationale comes from the need to get cyber warriors.

These are actually the exact types of things we need to do to enhance the nation’s cyber warfare capability. Unfortunately, they will also induce much unnecessary friction and dissent in the ranks. An infantryman, or even a mechanic, is going to scoff at a cyber warrior. That’s true even if he or she is winning an electronic war against China, if he or she is losing the war against Oreos working under reduced fitness standards. Similarly, a cyber warfare colonel is going to have some issues influencing his peers who hold more than 20 years of service over him or her, no matter how brilliant he or she is.

While these factors could be overcome in time, time is one thing we don’t have in the cyber realm. While the services can maintain their individual cyber activities in support of tactical objectives, just as they do for aviation today, operational and strategic-level cyber warfare needs its own service.

As in the beginning of airpower, cyber warfare is at risk of being subordinated to individual services’ interests instead of the strategic goals of the U.S. A standalone service would be better able to emphasize the unique capabilities of cyber warfare without the baggage of being one of many supporting element within the traditional services.

If cyber remains just a niche with those services, it will never have bonafide career paths for top individuals. A cyber warrior will never be, nor should be, the commandant of the Marine Corps or Air Force chief of staff, for example. The tactics and leadership necessary in cyber are distinct and different. This is true down through the ranks as well. Cyber is not just another support military job, like supply or maintenance. It is a significant weapon of strike and shield of defense in the U.S. arsenal.

In the information age, cyber can be just as deadly as a missile, and deserves a seat amongst top military commanders, at a minimum as a full unified command, and even better as a full member of the Joint Chiefs of Staff.

This service would be free to adopt the practices, tactics, and service culture that would support the cyber mission, and not have to fight through existing service bureaucracy. It would be able to fuse the military’s enemy focus with the new practices and innovation needed in this new realm.