Women Should Burn Their Draft Cards

2016 promises to be a year of demographic revolution in the military on par with the racial desegregation of troops... 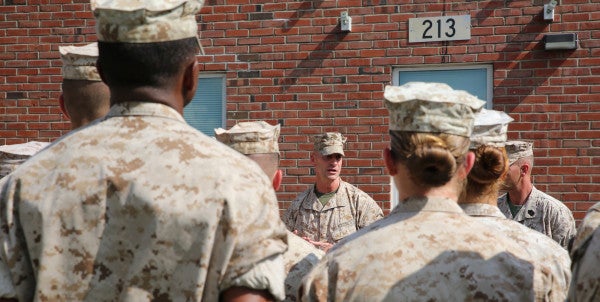 2016 promises to be a year of demographic revolution in the military on par with the racial desegregation of troops in 1948. But making a change as enormous as introducing women to combat jobs isn’t like flicking a switch. Even after President Harry Truman signed Executive Order 9981, integrating the armed forces on paper, it took decades to deal with issues like equal housing, promotions, and so on.

It’s going to be the same with women. Gender integration has been signed off on, but there will be an array of smaller issues to sort out going forward.

One of those issues is the question of whether or not women should have to register with the Selective Service System. It would seem logical that since all men of the appropriate age are required to, in the name of complete gender equality, women should have to also. Great arguments have been put forth in favor of women being held “equally responsible for shouldering the burden of their own security,” as Ellen Haring wrote for Task & Purpose. Two branch chiefs have even thrown their support behind forcing women to sign up for the draft.

Related: It’s time we require women to register for the draft »

To understand why we don’t need it, it’s probably important to understand what the Selective Service is and what it does. First of all, it’s an independent agency; it doesn’t fall under the purview of the Department of Defense. It’s also fairly small for an independent governmental organization, with only 124 full-time civilian employees and an annual budget of $23 million. Every man is required by law to register with the Selective Service within a month of turning 18, and then notify the organization of any change in contact information until they’re 25. Failing to register could result in losing student aid benefits, naturalization status, and being unable to be hired for federal jobs or get a driver’s license in some states.

After reading that, it might be obvious what the problems with the Selective Service might be, but let me connect the dots for you. Let’s assume that there’s an alien invasion and the government wants to very quickly institute a draft. How many 22-year-olds do you know are updating their contact information with the Selective Service as they move? I’m going to go out on a limb and say none. The only government audit of the system to ever be conducted found that 20%-40% of the contact information for the people who would theoretically be the first drafted was outdated, and that 75% of the men registered in their last years of eligibility would be invalid for the draft for one reason or another. It’s safe to say that any sort of draft instituted using the Selective Service would be slow, complex, and ineffective. There’s no reason to believe that it would work well during an emergency.

What the system does do well, however, is punish the young men who don’t register. A scathing article in The Washington Postwrote that “the price for failure to register is high and is largely born by the men who can ill afford to pay it: high school dropouts, disconnected inner city residents, ex-offenders and immigrants – legal and unauthorized – who do not know that the failure to register can jeopardize citizenship. In other words, those precisely in need of the type of job training, education, and citizenship opportunities that could help move them from the margins to the mainstream.”

The same article estimates that failure to register for Selective Service was responsible for the loss of $99 million in educational benefits and job training programs in California alone between 2007 and 2014. There’s not going to be a draft anytime soon, and most of these kids weren’t even aware of the registration requirement in the first place.

Besides it being an ineffective and arbitrarily cruel program, maybe the most compelling reason to do away with the Selective Service is that the Pentagon doesn’t want it. Secretary of Defense Ashton Carter recently said to the Senate Armed Services Committee, “It stands to reason that you will reconsider the Selective Service System and its treatment of females in view of the Department of Defense policies and practices with respect to women. But the second thing I’d like to say about the Selective Service System and the draft generally is this: We want to pick our people. We don’t want people forced to serve us.”

Simply put, drafting large amounts of hastily trained civilians doesn’t fit the Pentagon’s vision of the future of the armed forces. This shouldn’t come as a surprise, either. For years both the presidentand the Pentagon have pushed a vision of the military that relies less on massive industrial bulk and more on intelligence and automation.

Reporting from the Future of Warfare Conference this year, Rosa Brooks wrote, “The future of war may involve no soldiers, weapons, or battlefields at all. Think of ‘cyber war’: If you want to wreak havoc on an enemy all you need is a skilled coder, a half-decent computer, and a working Internet connection. … Meanwhile, developments in robotics and artificial intelligence will render large groups of armed humans less and less important in warfare.”

It’s an unalloyed good thing that the Pentagon now has access to the best people for whatever job it needs them for. The battlefield of the future will certainly include women. But there’s simply no place on it for an antiquated, unwieldy, and punitive agency like the Selective Service. It’s time to abolish it.