Give Women All The Rights Of Citizenship, Including Selective Service

At a recent Republican debate, Ted Cruz said that it would be “immoral” to draft our daughters. He went on... 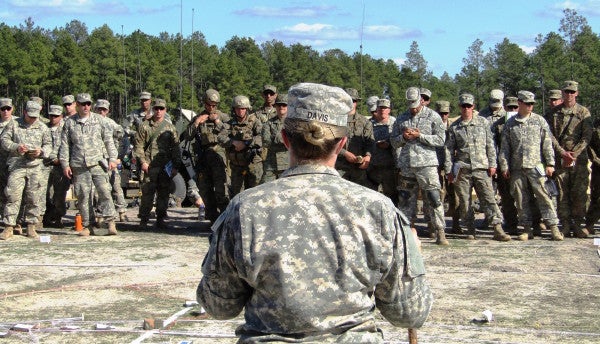 At a recent Republican debate, Ted Cruz said that it would be “immoral” to draft our daughters. He went on to make it very personal saying, “I’m the father of two little girls, and I love those girls with all of my heart.” When I heard his comments my immediate response was, “Well I have two sons whom I love with all my heart.”

Like Cruz, I don’t want to see my children drafted and forced into“a foxhole with a 220-pound psychopath trying to kill them.” Who would ever want that for their children — sons or daughters? But why should Cruz’s children get a pass on defending this country while mine don’t?

As with most of the debate currently swirling around this topic, it is grounded in tradition — the way things have always been — and according to Cruz is simply “common sense.” But what, exactly, is it about cutting off access to half of our population during a national crisis that makes sense? Aren’t Cruz’s daughters just as valuable to our national security as my sons?

All of the rights and responsibilities of citizenship are not, and should never be, the sole purview of men. As citizens of this country, women are just as vested in the security and defense of their homes and should be equally responsible for shouldering the burden of their own security. Exempting, indeed forbidding, half the population from sharing in those demands is illogical and violates principles of citizenship enshrined in our Constitution.

On Feb. 4, two Republican combat veterans, representatives Duncan Hunter and Ryan Zinke, both vocal opponents of women’s integration into combat positions, introduced the Draft America's Daughters Act. This act would require women to register for Selective Service. These two congressmen aren’t trying to advance the citizenship status of women or tap into the resources of half the population; instead, they’re hoping to garner resistance to opening combat jobs to servicewomen by invoking emotional responses to the specter of women being drafted.

A key element that all of these discussions is ignoring is that our daughters are already serving in combat. Since 1993, women have been allowed to fight offensively in the air and at sea. In the Army and Marine Corps, women fly attack and reconnaissance helicopters and they are fighter pilots in the Air Force, Navy, and Marine Corps. Furthermore, women in the Army have been fighting on the ground in artillery, military police, and engineer units since 2001. And they haven’t always chosen these occupations. Women who graduate from West Point are assigned as artillery officers whether they want to be in the artillery or not.

Women aren’t afraid to serve in any capacity and many have sought out ground combat assignments. Moreover, well over 9,000 women in just the Army have received ground combat awards since Sept. 11. Women have already been in foxholes and our numbers, as a percentage of the total force, continue to rise. The recent decision to allow women to serve, without exception, in all ground combat occupations and units was an acknowledgement of this reality.

This is a no brainer for most citizens, including the heads of both the Army and the Marine Corps who said that women should have to register for Selective Service. The bottom line is that all citizens should be treated the same; either everyone registers or no one registers. Reducing this to an emotion based debate about putting our daughters in foxholes, as Cruz has done, isn’t helpful. The debate should be about whether we keep Selective Service in its current form and incorporate women, or if we re-conceptualize how it might more effectively serve the country moving forward.

Regardless of what happens there should be no difference in how any group of capable citizens is leveraged in service to the nation.