How To Thank Veterans For Their Military Service

For veterans and service members, receiving thanks on Veterans Day, or on any day for that matter, can elicit a... 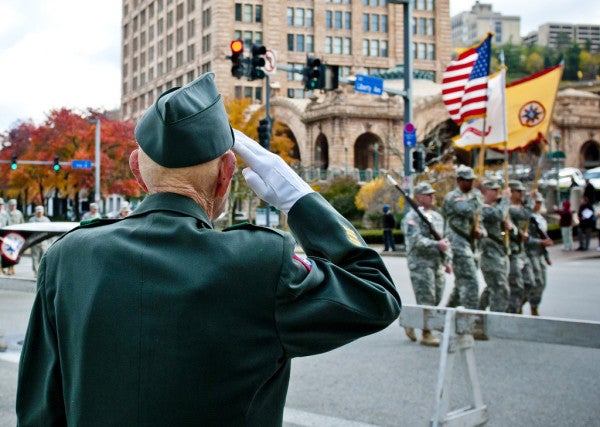 For veterans and service members, receiving thanks on Veterans Day, or on any day for that matter, can elicit a wide range of emotions or reactions. Some may respond with a genuine smile, others may give an awkward and humble nod. The reasons for why are as varied as the reactions and as diverse as the veterans being thanked, which raises an important question: On Veterans Day, how do we honor the men and women who have taken this oath and served our country and the American people?

Task & Purpose posed this question to our network of contributors, specifically asking, How should people thank you for your service? Here’s what they said.

“It can be frustrating to be thanked for my military service for a few reasons, but often it's because there's no easy, conversational response. Normally when someone says, ‘Thanks for XYZ,’ I can just say, ‘You're welcome.’ But in this case that sort of rings flat. If people could just find a way to make it easier and more conversational to respond when they thank a veteran for their service, that would be pretty awesome.” —Kevin Bell, U.S. Army veteran

“Listen when I share my stories and ask questions. Don't be afraid to offend, veterans aren't shrinking violets. We're pretty hardcore. And if you want to buy me a beer, I wouldn't turn that down.” —Stephanie Christopher, U.S. Army veteran

“Welcome home with a handshake is enough for me. Please do not place me on a pedestal.” —Ryan Kaufman, U.S. Army veteran

“I understand the sentiment and the desire to convey appreciation. Rather than thank me, however, I would prefer people to take moment and think about the original November 11, in 1918. After a horrific campaign, the endless shelling, gassing, and gunfire ceased at 11 am, replaced with the first silence that the battlefields of World War I had heard in four years. Think of the shock and limitless thankfulness the soldiers felt as they heard birds chirping, something we hear and take for granted every day. They had survived hell, and could be reunited with their families. These men carried the scars of war with them forever, as do veterans of all conflicts.” —Angry Staff Officer, U.S. Army National Guardsman

“The best way people can thank us for our service is by engaging the military and veterans communities in meaningful ways. Recognizing their sacrifice and taking meaningful action to ensure that the promises made to us when we entered service are kept.” —Shawn VanDiver, U.S. Navy veteran

“Getting prescriptive about how people should thank me is stifling and unhelpful. I appreciate gratitude no matter how it's conveyed.”—Lydia Davey, U.S. Marine Corps veteran

“With regards to being thanked for my service, no one should be under any obligation to do so. If they want to, that's fine, although ask about my experiences, the people, the conditions. The real, honest stories we share truly help people understand a concept so foreign (literally and figuratively) to them. If they truly feel the need to thank and support service members, I would encourage them to find a veteran's group or organization and help them out however they can.” —Kyle Dykstra, U.S. Army veteran

“I'm partial to a short and quick ‘thank you.’ Even though Veterans Day is about the living veterans, I always feel like the ones who lost their lives should still be recognized for their valor and sacrifice. I'd encourage people to make an effort to extend some kind of help to the veterans who could benefit from something as small as a tip on how to improve something, or extending an invitation to participate in some kind of gathering or event.” —Jason Callahan, U.S. Navy veteran

“I think the best way to thank veterans for their service is to earnestly say thanks. We don't want anything special, after all we did volunteer. The wars of the last decade have been unprecedented in their effect on veterans, and simply knowing that those whom we have served and protected appreciate it really goes a long way.” —Mike Grice, U.S. Marine Corps veteran

“When asked how to someone should thank me for my service, I respond simply: learn the Constitution, get informed, and vote accordingly. Don't allow the rights that veterans fought, died, and bled for, to be voted away or limited due to ignorance, laziness, or a sheep mentality. If you want to do something more substantial you can always support Soldiers in need, donate to charities that support Veterans, or find a local Guard or Reserve unit for your company to adopt.” —Brock Young, U.S. Army veteran, Army National Guardsman

“How should people thank me for my service? Vote!” —Alexander McCoy, U.S. Marine Corps veteran

“Talk to me. Ask me what my job entails, what I enjoy about the military or why I chose to serve. Not because I like talking about myself, but because it's a more meaningful way to engage if you have a better understanding of what you're actually offering thanks for.” —Marissa Cruz, U.S. Navy reservist

“By moving beyond bumper-sticker support for veterans. Help us help each other by doing three things: get involved with veterans' organizations, get politically involved, and vote. There are many worthy organizations out there that both do good and bridge the civilian-military empathy gap. And in a nod to Clausewitz' dictate, “War is politics by other means” — honor the actions of veterans by ensuring that your voice is heard at the ballot box.” —Welton Chang, U.S. Army veteran

“Don't thank me at all. My father and grandfather were combat vets who fought at Hamburger Hill in Vietnam and the Battle of Peleliu during World War II respectively, receiving Bronze and Silver Stars for their valor and devotion. Until I can stand shoulder to shoulder with them, your thanks are better directed toward someone who has proven their dedication to the values of honor, courage, and commitment.” —David McCauley, U.S. Navy veteran

“I'm not one of those who hates it when someone outright thanks me for my service; however, for me, the greatest way to thank a veteran is to get to know one, and also to get educated on veterans' issues. Then, use that knowledge to vote responsibly in local, state, and federal elections, especially those with referenda on military issues. We serve the people, and the best way for the people to thank us is to use their civic power in an informed, responsible manner.” —Rachel Brune, U.S. Army reservist

“The best way to thank a veteran is to take a brief pause in your day and really listen to what a veteran has to say about their experience. I love it when I can talk about how my service has made me better and what I learned from my fellow military members that I use each and every day. To me, thanking someone for their service means you are willing to learn about their military service and personal sacrifice.” —Chad Storlie, U.S. Army veteran

“Simply do what God put you on this earth to accomplish — build a business, grow a family, advocate for things you are passionate about. The best thanks you can give to a veteran is living a life of meaning only available in the United States” —Benjamin Kohlmann, U.S. Navy officer

“A simple ‘thanks’ is enough for me, although I don’t feel like my service really holds a candle to those who served in Vietnam, Korea, or World War II. Those guys had it a lot worse than we did. People could honor my service by thanking those veterans — they are aging and won’t be around much longer. Better yet, capture the stories of veterans they may have in their own families. It’s an important blood link to our nation’s history and brings the value of our freedom to life.” —Jason Nulton, U.S. Air Force veteran

“There’s a fine line between an ungrateful public and overly supportive apologists. Don’t feel sorry for veterans or service members, we all volunteered to serve something greater than ourselves. There are numerous citizens who are genuinely supportive of the endeavors of the military and other public servants. When someone thanks me whether I am in uniform or when they find out I’m a vet, I respond with a simple “Thank you for your support.” —Mike Denny, U.S. Army veteran, Army National Guardsman

“Posting a hashtag to social media or changing a green lightbulb may be a good first step, but it doesn’t do much to really say “thank you.” Some better ways to show you care can be as simple as volunteering at the local VA hospital, lending a hand with a local veterans group, or donating to a worthy veterans cause. For companies or schools that really want to say “thank you,” hire veterans; enroll veterans; and most of all, get to know your veterans. If you want to let your veterans take the day off this Veterans Day, I think that works too.” —Ryan Gallucci, U.S. Army veteran

“Two big ways to thank me for 24 years: 1) Promise me you will urge your kids and grandkids to serve their country. If in the military that's great, but if not find a way to serve in something bigger than themselves; 2) Promise that you will not vote for anyone who dismisses the problems at the Veterans Affairs Department as an easy fix because it's not a real big problem. If someone stands in the way of VA reform laws, vote them out.” —Jason Howk, U.S. Army veteran

“The biggest thing people can do is do something, not say something — if you’re of military age, enlist. If not, then volunteer for your community in a meaningful way. If you can’t serve your country overseas, then do it at home. If you can’t do that, donate to a veterans service organization to help ensure veterans get the care they need.” —Carl Forsling, U.S. Marine Corps veteran

“The most meaningful ways people can thank a veteran is through action. Volunteer with a veteran-related organization or welcome a veteran friend to join for a workout or group activity. Even visiting or researching community war memorials or monuments shows the potential for a deeper understanding of the sacrifices made by veterans. People thanking veterans genuinely through action is a far more meaningful gesture of gratitude than a couple of words.” —Jennifer Dolsen, U.S. Army veteran

“Our military stands as the world's finest due to the selfless sacrifice of millions of men and women. Millions of men and women stand as better citizens and more valuable members of the workforce due to the intangible traits and tangible skills they developed through military service. So, this Veterans Day, and all days going forward, let's not just thank veterans for their service, but recognize them for what they have always been: America's elite, the best of the best.” —Chris Flurry, U.S. Marine Corps veteran