Want To Show Your Support Of Vets? This Video Explains How

Got Your 6, a nonprofit that works to foster accurate portrayals of veterans, knows exactly how to honor veterans this... 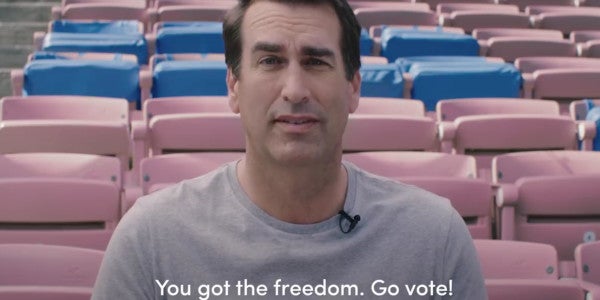 Got Your 6, a nonprofit that works to foster accurate portrayals of veterans, knows exactly how to honor veterans this year: vote. The organization has partnered with issue-driven media company, ATTN:, to release a new public service announcement around the election and Veterans Day.

“Got Your 6 believes that voting is the most basic civic responsibility, and that disengagement is a sign of faltering community health,” Bill Rausch, the executive director of Got Your 6, said in a statement. “As veterans, we feel it is our responsibility to lead from the front by challenging Americans to not just thank us for our service, but to honor every veteran by voting.”

As much as 70% of military veterans voted in the last presidential election, compared to roughly 60% of the total voting eligible population, according to U.S. Census data.

Watch the PSA from Got Your 6 below:

got your 6
rob riggle
voting