Civilians Need To Get As Engaged In Their Communities As Veterans

In the world examined by veterans advocacy group Got Your Six, veterans are not broken. They are not dangerous. They... 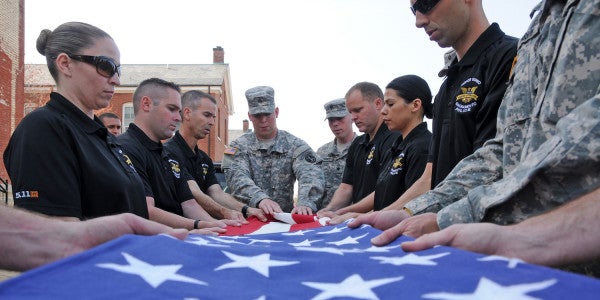 In the world examined by veterans advocacy group Got Your Six, veterans are not broken. They are not dangerous. They are not troubled. Instead, they are diligent community members. They vote. They volunteer. By all accounts, they are more engaged in their communities than non-veterans.

In the second annual Veterans Civic Health Index, Got Your Six — in partnership with the Harry and Jeannette Weinberg Foundation, American Express and the National Conference on Citizenship — delves into the copious data on the American population provided by the 2014 Census Current Population Survey, Volunteering Supplement, and Voting Supplement to examine how the influence of military service is reflected in veterans’ contributions to civic health and community engagement.

The findings are reassuring for those who believe that military service turns young men and women into valuable contributors to society. Across a number of metrics — volunteerism, voting, charitable giving and community involvement — veterans of all generations tend to be more involved and more generous than non-veterans, even if not always overwhelmingly so. Clearly, veterans care, and communities benefit because of the lessons that military service teaches and the values it instills.

The Index captures some key positive traits of veterans that are likely attributable to the self-selecting nature of volunteer military service, where veterans are more likely to ascribe to patriotic ideals that can go hand-in-hand with community service. At the same time, the picture is incomplete, much like negative portrayals of veterans, because it freezes the community in isolation, looking in this case at its most positive and contributory traits.

The lesson we cannot lose sight of, and which Got Your Six executive director Bill Rausch has commented on in the past, is that veterans are three-dimensional. They have been shaped by a specific commitment they made to serve, but they also share many life experiences and traits with non-veterans. They may do more in their community than non-veterans, but they also face challenges that non-veterans do not face. They are not simply heroes or victims.

While the Civic Health Index focuses on the community involvement of veterans, there are other ways in which veterans are making a difference in their communities and contributing to civic health. For example, veterans have historically been 45% more likely than non-veterans to be self-employed, and unlike nonprofits and volunteer groups, small businesses are the primary drivers of job creation in communities. Joblessness is a major contributor to unrest in communities, so when veterans start businesses and hire both veterans and non-veterans, they can have a substantial impact on civic health. We should not just be advising businesses on how to interact with and hire veterans, but encourage veteran business owners to employ their companies as forces to generate not just profits, but also generate positive community impact.

There is one giant question mark that is left unaddressed in the Civic Health Index. While the data Got Your Six has collected clearly indicates that veterans have been and continue to be more active in their communities than non-veterans, there are simply fewer veterans alive today than at any point over the last three decades, and the decline will continue to be steep over the next decade. According to the RAND Corporation, “the total number of veterans is expected to decrease by 19 percent between 2014 and 2024, assuming no major policy changes or large-scale conflicts. The median age of this population will continue to increase, and veterans are projected to become more geographically concentrated over this period.” That means that by 2024, the veteran population could dip to 17.4 million.

There is nothing to be done to change this basic demographic reality. That means that the net positive contributions of veterans to community and the benefits accrued will decline as well, no matter the lessons learned from this report.

The Civic Health Index is a positive contribution to the debate about veterans’ roles in society. It provides reasonable, thoughtful recommendations for all sides to maximize the benefits of veteran involvement. But we must recognize that the veteran population is aging and shrinking, and consider how we can maintain overall civic health when there are fewer veterans around to set a positive example.

Given these demographic shifts, even as we celebrate civic-minded veterans, we must teach non-veterans not just how to appreciate and collaborate with veterans in their communities, but how to learn to imitate the mission-driven mindset that pushes veterans to make a difference, to be heard and to be seen in their communities.

In the first Index, Got Your Six examined the civic health of veterans. In this second Index, the examination was coupled with recommendations. Hopefully the third Index will further expand the conversation by addressing the challenges of responding to the declining veterans population.