How Veterans Can Get More Involved In Shaping Foreign Policy

Many people see a problem and lament it; few actually have the guts to do something to solve it. Air... 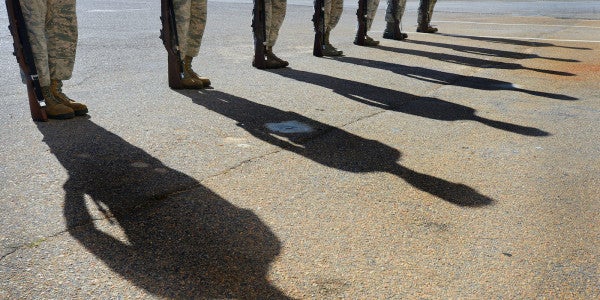 Many people see a problem and lament it; few actually have the guts to do something to solve it. Air Force veteran Jayson Browder is in the second category. While the lack of veterans in key foreign policy roles has been remarked on previously, no organizations had been founded specifically to address the problem.

In 2015, Browder took it upon himself to change that. He created a nonprofit — Veterans4Diplomacy — with no money, no donors lined up, and no experience in the nonprofit sector to rely on. A high school dropout, Browder now holds a plethora of prestigious designations and degrees, and wanted to pass some of those same opportunities on to other veterans.

As the director of communications for the organization, I help spread the word about the Veterans4Diplomacy mission. It was Browder who convinced me to get involved after explaining his vision for why veterans should be more involved in foreign policy.

Our organization seeks to help bridge the civilian-military divide by bringing outstanding student veterans into global leadership through training, mentorship, and guidance in obtaining career-accelerating opportunities. Already in its second year as an organization, it is by all accounts off to a successful start, mostly thanks to the work of Browder. This is his story.

You've mentioned that you're a high school dropout. How did you get from there to founding a nonprofit, becoming a Fulbright Scholar, former Hill staffer, and Presidential Management Fellow?

At 17 years old, I had dropped out of high school with no diploma in hand and had to earn a living. I worked for a year in an old factory called Freeman Mill Works — which closed during the recession, after a 100 years in business — building doors for 10 to 12 hours a day. Like many young people in the South, I believed that this was it for me, stuck in a dead-end job in my town of 4,000 people. However, my family (all who have served since the French and Indian War) had always encouraged me to look at the military as an opportunity to improve myself and to give back to my community and country. One day, I made a trip to the next town over to speak with an Air Force recruiter who explained that he thought I would be a great candidate for the Air Force but I needed to go back to school and finish my high school education. That decision has always been one of the hardest decisions I have ever made, to go back to school after I had decided that I didn’t want any more education. With the encouragement of my recruiter and family, I headed to adult education in the evening to finish my credits and receive my diploma.

On Jan. 23, 2007, I arrived at Lackland Air Force Base with a new appreciation for knowledge. Coupled with the training and guidance of my mentors and colleagues in the military, I applied that mindset to every endeavor since. This has lead me to where I am today, founder of a national non-profit for high-achieving veterans, Fulbright Scholar to Turkey, former Hill Staffer and now a Presidential Management Fellow at The White House. Those interactions also gave me an intense appreciation for what mentors and guides can do for someone with potential, but who may need both a helping hand and a kick in the ass from time to time.

What made you want to start Veterans4Diplomacy?

I wanted to start Veterans4Diplomacy because one of the biggest challenges I’ve seen in my time in government is a clear lack of veterans in the policy-making space. While serving in the military, I had the fortunate opportunity to work with some of the best minds implementing American foreign policy abroad. Once back home, it became apparent that those men and women were not actively engaged, after separating from the military, in the policy circles that develop our nation’s foreign policy. This led me to thinking how highly problematic this absence is because veterans have a unique perspective, education, and experience serving our country abroad.

First, there tends to be a distinct gap in real-world experience and knowledge between most policymakers who are developing American priorities abroad and the public servants in the military who are actually implementing it. It is essential to create a cadre of policy makers who understand the on-the-ground consequences of their decisions.

Second, and most importantly, we can see concrete benefits to our communities and to our nation when our veterans are re-engaged once back home. This has been the case for almost every major war, but is specifically so with Iraq and Afghanistan veterans. In dealing with today’s conflicts, veterans have learned to accomplish missions and tasks without clear guidelines to follow; this has fostered an entrepreneurial spirit in service members. Moreover, the military instills a determination and an appetite for risk that follows today’s veterans back home.

You're just getting into your second year with this organization. What have been the biggest successes and challenges so far in making this a reality?

The biggest successes have been getting our veteran fellows to feel empowered once returning home. For all the military has given them, one area that it continually fails in while helping service members transition is sharing what makes that individual unique. Each veteran returning from service is positioned to make immediate impact once separated and only needs to realizes his or her full potential. Once we enable that type of thinking we can see their direct impact since our first year fellows have already been placed in leadership roles at the White House, National Counterterrorism Center, U.S. Department of Justice, and at the U.S. State Department.

The most challenging hurdle to overcome has been the saturation of veteran nonprofit organizations vying for a limited amount of the public’s time and contributions. This is especially true of organizations that sell a narrative that our nation’s warriors are all broken and defeated. While there are real headwinds veterans face when reintegrating into society, that narrative of defeat can become self-fulfilling, but is also completely at odds with the type of intelligence and dogged determination we see from the student veterans we work with every day.

I think the mentorship is an interesting aspect of the organization. Why did you include that as a hallmark of the program, and what are some of your mentors like?

Mentorship is the glue that holds everything together for our program. At the end of the day, we are building relationships between the fellows, our staff, and especially our mentors. Individuals like Eric Gardiner, former Navy Seal Officer, Marshall Scholar and current Advisor to the President of CFR, or Joe Riley, Army officer, Rhodes Scholar, Truman Scholar and doctor of philosophy from Oxford University, have an invaluable network as well as the experiences to make this transition into an impactful career possible.

The organization also seems unique for its focus on women. Can you tell us more about the Women's Initiative? Where did that idea come from?

The Women’s Initiative is something very special for our organization. It started organically between a mentor — Melis Tusiray — and a female fellow in our organization. The discussion about a female’s transition and their impact in the policy space led to a luncheon between all the female fellows in the group. It then led to monthly calls directed by Melis on specific support for specialized issues that the female fellows face in their academic and professional lives, and to promote a greater dialogue on the issues important to female members of the military and veterans.

We then officially formalized a program at the beginning of this year naming Melis and another staff member — Katie Davidson — as co-directors of the Women’s Initiative. Currently, the program includes monthly mentor calls, a women’s-only luncheon with senior women in the field — such as Ambassador Bonnie Jenkins — and also specific female panels that are open to the general public for awareness and networking.