Judge Stephen V. Manley does not shy away from tackling society’s most intractable problems. He founded the Drug Treatment Court... 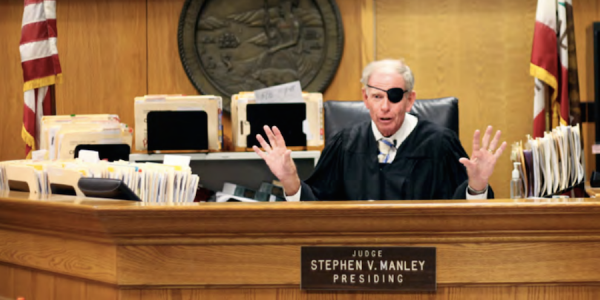 Judge Stephen V. Manley does not shy away from tackling society’s most intractable problems. He founded the Drug Treatment Court and Mental Health Court of Santa Clara County, California, after recognizing a systemic problem: State services were not being offered to treat mentally illness for clients who appeared in drug courts. Today, Santa Clara County has a separate drug court and mental health court equipped to meet the unique needs of each client population.

With 30-plus years at the forefront serving the most at-risk populations, Manley is uniquely suited to serve the veterans who come before him in court. In 2008, he founded the Santa Clara County Veteran Treatment Court. Like drug courts and mental health courts, veteran treatment courts are diversionary courts consisting of a structured, rehabilitative program actively monitored by the judge. Veteran eligibility is determined upon first entering the criminal justice system and the decision to participate is up to the veteran. Veterans who are part of a VTC are often allowed to remain in the community, contingent upon the veteran’s success in the treatment program.

What has been the greatest challenge in establishing and maintaining a VTC?

There are a number of challenges. One is a lack of treatment. It’s not just with the VA. We accept people who are not eligible for treatment with the VA even though they are military veterans. We have to determine how to get them treatment between the VA and the county depending on who has the shorter waiting room. But it is always a challenge to find treatment for the large number of people who we serve.

Another challenge is we have a very large court for veterans, and the population is growing so we’ve had to extend the number of days that we hold court. It’s very difficult for the VA because they really aren’t organized in terms of veterans treatment courts; the staffing is limited. We depend to a large extent on our partnership with the VA and when they don’t have the staff dedicated to the court it’s very hard to provide the services and treatment.

We have no exclusions to veteran eligibility, so we have people with major offense and people with minor offenses. Another challenge is we’re seeing an increase in veterans being charged with more serious offenses involving public safety. That is a change from where we were eight years ago or 15 years ago. That is for us a major challenge for getting the appropriate treatment in place because the public safety comes first so it becomes more complicated. We’re not just working with veterans; we have to protect the victim and make sure they’ve had restitution and that they’re made whole.

You have to be flexible in terms of how you deal with people and how you adjust your program. Every veteran has a treatment plan, but you can’t just say that because someone served in the military and is in a VTC that you can use the same treatment for every one of them. Every person needs an individual treatment plan. If you don’t understand that you don’t get anywhere.

I know with PTSD, if we’re not treating it, they will continue in our system. That’s what we’ve seen with Vietnam veterans. We did not address the unique problems of veterans after Vietnam. We did not have treatment courts and we had terrible outcomes. That is the reason I started mine, because we knew people we coming back from Iraq Afghanistan, but if you know anything about Vietnam veterans they never received treatment and there are too many of them in our system still. My view is you should never repeat the mistakes of the past. If the courts have not responded appropriately to veterans of the past we should not continue that practice after Iraq and Afghanistan. I saw that as a real reason to work with this group of veterans. if we don’t we pay a heavy price.

Is there adequate treatment for those who are eligible for VA benefits?

There isn’t adequate treatment locally or through the VA. Veterans are just one of many who aren’t getting adequate treatment. The wonderful thing about the VA is that they only serve veterans. If I can’t get treatment from the VA, I go to the county. That’s why I don’t exclude people from my court. See, many VTCs exclude you if you have an less than honorable discharge and you’re not entitled to VA treatment. There’s always reasons to exclude people, and that’s not for me to say; that’s up to every court.

Why is eligibility so broad in your court?

We believe in providing treatment to everyone who has served in the military that we can. It comes down to this: Are judges responsible for outcomes? If I accept responsibility then I need to improve outcomes. The only way I improve outcomes is to go off what the evidence teaches me. Treatment works, and that does lead to reduced re-arrests.

What is the recidivism rate in your court?

15% for veterans only. It’s very different for others. I find that VTCs are the most successful because of a whole lot of reasons; one is the military experience. When you put veterans with other veterans and bring in peers, you will generate success. Military culture is a culture of being together and it is outcomes driven and is about supporting one another. This is the opposite of those coming out of prison where individual survival is the goal. When you put veterans together you build on the positives.

How much does Santa Clara rely on its volunteer mentor network for its VTC?

We have peer mentors, I wish we had more. But it’s very hard to run a very large VTC and have a peer for every veteran in it because you’re talking about 300 peers. It’s very challenging. Our philosophy is doing the very best we can to help every veteran. It’s very hard to get enough peers. Its takes a coordinator and training, but it’s one of the best parts of veteran treatment courts. I would tell a judge who was going to start a VTC, make sure to have a peer mentorship program. That’s one of the strongest predictors of success. I would say, one, have a solid relationship with the VA, and two, have peer mentorship. One veteran helping another, it really works.

What do you think holds back jurisdictions the most from establishing VTCs?

I think there are a whole lot of reasons, one is not understanding. If you see someone in the criminal justice system and they’re a veteran you should immediately assess them. It takes extra time by a judge. It takes commitment by a court to do it and courts are very busy. I believe judges are responsible for outcomes. We should be doing our best to improve the criminal justice system, not just maintain it because it’s a terrible system.

Another reason is there is a stigma against people who have mentally illness. No one wants to work with someone who has a less than honorable discharge even though they have a mental illness; even though they served their country. With violent crimes, victim rights groups don’t favor necessarily helping the person who is responsible; generally courts do not want to get involved with providing treatment with serious and violent offenders, so that’s another reason.

From your perspective, what organizations should jurisdictions turn to when seeking guidance in veterans policy and establishing a new VTC?

Go out and talk to the local VA. The greatest thing a judge can do is get people to have meetings. And they can reach out to people. Because if a judge reaches out surely someone will talk with them. But if you send a probation officer that’s not going to get you anywhere. We all have the same goals. I started my VTC by reaching out to somebody in the VA, and from there we grew into a very big VTC. And then you have to reach out to the Veterans Centers because they provide treatment too and they have nothing to do with the VA. And they do great stuff. And then you have to learn the veterans system.

I think that Justice for Vets is the greatest thing that ever happened for VTCs. You can reach out to them and get training, learn about mentors, learn about treatment, learn about what judges should be doing. It is a centralized program to help create, develop, and implement. They have the greatest knowledge base. It’s gotten congress to provide funding for VTCs, I mean think of any other program that’s gotten funding from Congress in the last five years. They’re outstanding. That’s where I would send any judge interested in doing this. And they should be. We should not allow those coming from Iraq and Afghanistan to end up where Vietnam veterans in the criminal justice system did. And you have to be aggressive. You have to be willing to take risks. We should have a VTC in every court.

Do you see a role for institutions like Stanford University?

They’re not the only ones. Universities can drive change. The biggest issues to me are the lack of awareness and the lack of knowledge about mental health.

The VA currently suffers from a poor reputation and lack of trust, how is the VA doing in your jurisdiction?

I know that it’s a broken system. I know that they don’t have sufficient treatment resources. There’s no question in my mind, but locally, when I started my VTC we had a very difficult time placing people with the VA. I have no problem now. My point is this: what’s gone wrong is that everyone is blaming everyone. We never say ‘Solve the problem!’ I have seen a dramatic change in my VA hospital and their treatment program. They have been more than willing to go the extra mile to try and figure out how to help the veterans in my program. They go into the jail they interviews, they come up with treatment programs we have a way to find out how the veterans doing. They solve problems. Instead of accusing them you support their efforts to change and provide treatment to the veteran.

So what I’ve seen is a dramatic change in the VA. They are much more engaged in trying to help clients. You can talk about the VA nationally, but at the local level which is where things really matter I’ve seen dramatic change for the better. We are never going to get change by waiting for congress to change the VA. It’s too large, congress is too overburdened. The way to remedy that is to stop complaining and work on it locally. Lots of people don’t understand that the secretary of VA can’t change things locally. And everything in the VA is done locally. I don’t believe in blame but what I do believe in is actually working with the VA and being open to their challenges and accept what they’re not willing to change today and move on. The behavior modification program that we started here, my VA is offering it. Do you find it across the country? No. But it’s exposing my local VA to these new programs and they’ve become more than willing to incorporate it into their treatment plans. Again and Again what I say, what courts need to do is engage their local VA and learn new things about the VA and make them a partner. I say let’s find a way to make it work. Because we all have the same goal.