10 Questions Only A Veteran Would Ask Rudy Reyes 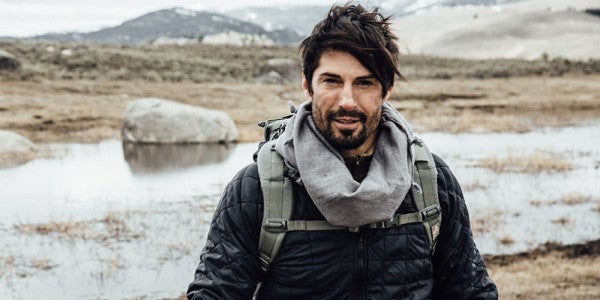 Many of us join the military in search of a calling or a purpose, but some aren’t searching. They know exactly what they’re after. As a lifelong athlete, martial artist, and the son of a Marine, Rudy Reyes enlisted in 1998 and spent seven years as a reconnaissance Marine and scout sniper. Reyes’ 2003 deployment with 1st Reconnaissance Battalion during the initial invasion of Iraq was intimately detailed in Evan Wright’s award winning book “Generation Kill.” He even played himself in the 2008 HBO miniseries based on the book.

Reyes’ physical strength, military exploits, and insight into the early years of the Global War on Terror belong on the screen and in best-selling books. Fortunately, that’s already been done, so we asked Reyes about the other stuff, like the time he almost got the silver bullet. So, on to the good shit.

What’s the dumbest thing you ever did as a private?

One time early in freaking School of Infantry, it was super cold in DeLuz Canyon, where we were bivouacked — hard living out in the field — it was so cold I had my long johns on. When we got up, it was still freaking zero-dark-thirty and I thought, “Oh, okay, it’s so damn cold I’m going to leave my long john bottoms on.”

We go right into a 10-click movement up, down, and up DeLuz Canyon, and all of the marine layer burnt off. The sun’s burning right down on us. We finally get to our freaking objective and it’s about noon. I didn’t bring enough water. I was sweating to death. I almost went down as a heat casualty. I was about to fall off the damn cliff, but thank god one of my teammates behind me fell out and went down from the heat. They had to do a training time out, bring in medics, and, bro, it saved my life that one of my boys was just a little weaker than me, and I got to drink water when they brought the water buffalo up there. Never again would I ever operate with warming layers. That’s something I learned the hard way. But, thank god, some boot private was weaker than myself and fell out, because I almost went down and got the silver bullet up my ass.

Rip Its or Wild Tiger?

We did something called the soul snatcher.

The soul snatcher is an espresso machine that I had that just worked on an open fire, like in “Generation Kill.” I would make four cups of espresso as one coffee and then we would add Folgers freeze-dried coffee on top of the espresso, then a chocolate mocha powder mix and stir it up. We would make a whole Nalgene bottle of this super strong straight-up coffee mixed with crack cocaine (not really) and chocolate fire water and we called it the soul snatcher. We’d shake it up and you’d have one sip of this shit and you’d start convulsing, and boy, you would not fall asleep on watch. You would be fired up. You would also shit your pants. It would make you want to shit yourself right there. In lieu of the freaking soul snatcher, yeah we would go with the Rip Its.

The zombie apocalypse kicks off, what’s the first thing you do?

Well, first of all, a warrior doesn’t get ready. A warrior is ready. My kit, as we speak, is already staged. I’ve got the six basics of survival and a rally point already with stuff staged where a few of my boys go out to a place to train.

Finish this sentence: You shouldn’t join the military if…

You shouldn’t join the military if you’re not prepared to die.

I would always consider “Heat” my favorite war film, even though it’s a crime drama, it’s really about opposing forces, and about teams, and using tactical superiority to defeat a greater numbered force with more infrastructure. Smart weapons. All those guys on Neil McCauley’s (Robert DeNiro) team were smart weapons.

What is your go-to MRE recipe?

If you could go back in time and talk to yourself at the Marine recruiter’s office, what would you say?

I would’ve said: “Rudy Reyes practice your swimming more,” because the swimming was really hard for me in the beginning. I almost drowned a couple of times. I’m amazed I made it through the indoctrination. I’d never had fins on my feet before, so imagine me going into recon learning how to fin. I was actually finning backwards at first. Aside from that, there’s nothing I would have changed.

What has been your single scariest military experience so far?

One of the worst, or one of the scariest, was on our way to assaulting an air field in which my team had not slept in about 10 days. No one had slept more than possibly an hour every couple of days. All of our training prepares you for such horrible conditions, but even with all that preparation after eight, nine days of no stopping, the body and brain is breaking.

On one of the tactical halts, my eyes were so tired and I shut my eyes for one second. I don’t know how long that second was. My head shot up, and I looked up again and the whole fucking platoon was gone. We were left. We were isolated. The unit moved on, brother. I looked up, and everybody in my team was asleep too. We had pushed so hard, everyone one was down. My freaking heavy gunner was slumped over the Mk19, the radio operator was slumped over his radio, my team leader, Pappy, his head was rocked to the side sleeping over the sniper system. Everybody was crushed and we had dysentery too so everybody was shitting themselves and throwing up. We were very weak. When I saw everybody was asleep I yelled, “Wake the fuck up!” I slammed on the accelerator, snapped everybody’s head back and bro, we fucking linked back up. That was the scariest thing. You can imagine how frightening that is, to be left alone, and also to let your platoon and your company down because you were lost. It was scary, but you know what? Everybody was so fatigued they didn’t even notice we were not behind them.

When I made it through amphibious reconnaissance school. We lost like 70 or 80% of the people and I was wrecked, I was like the walking freaking dead. I was 15 -pounds, worn down, but I made it through. I got my recon PT gear and got my black sweatshirt. The first thing I did was not go home to my wife, I went to my dad in South Texas and I gave him my recon sweatshirt. Proudest thing I’ve ever done in the Marine Corps. I’m proud of my service and every bit of the service my brothers gave me, but giving that sweatshirt to my dad was really special. He was a Marine.

What’s the one thing to always remember in a firefight?