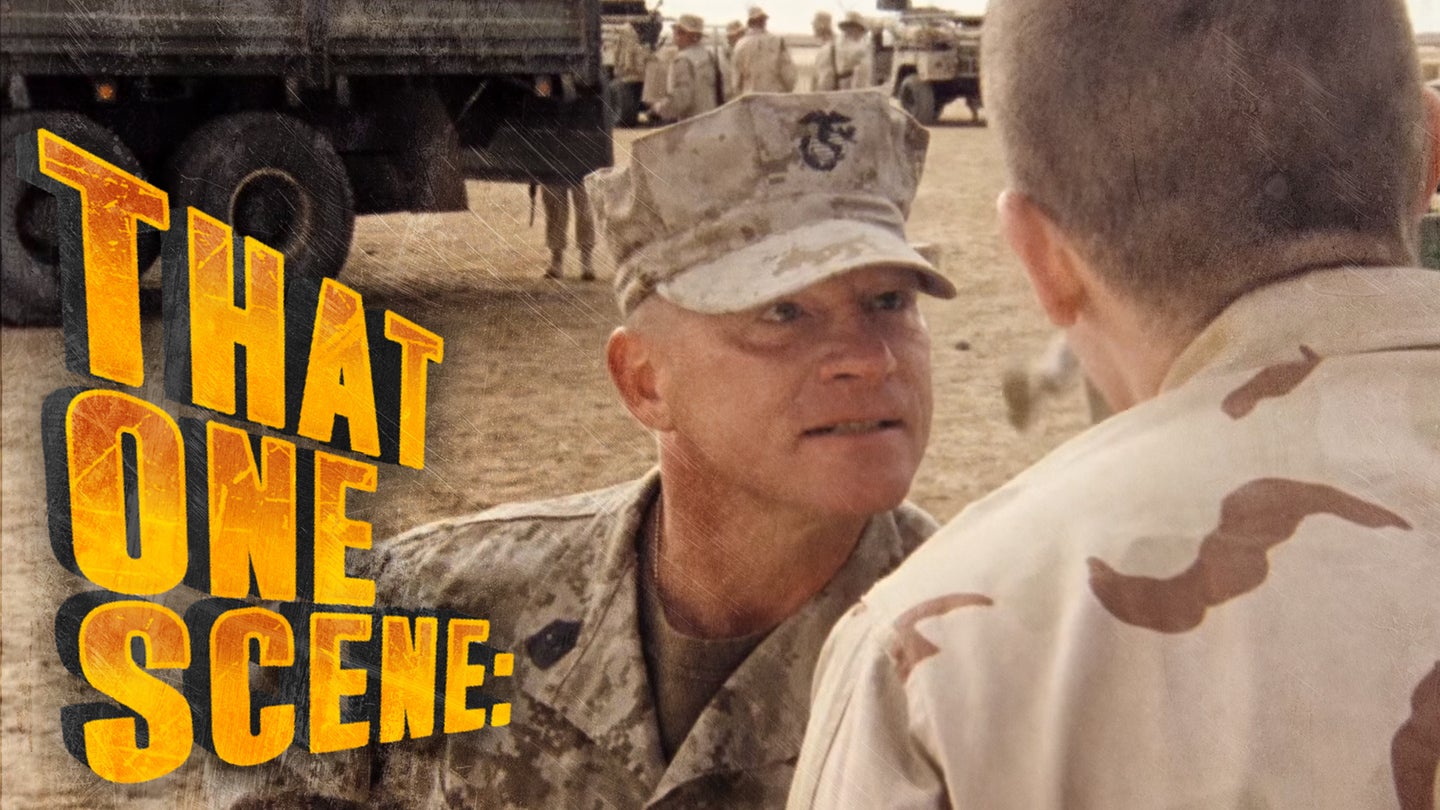 A screenshot from HBO's 'Generation Kill' showing Sgt. Maj. Sixta as he lays into a Marine over the length of his 'moostash harrs.'.
SHARE

The one moment from Generation Kill that best captured what it’s like to serve in America’s Global War on Terror had nothing to do with combat and everything to do with bullshit. HBO’s seven-part miniseries is a masterpiece, same as the book upon which it was based. Published in 2004 and based on a string of Rolling Stone articles written by Evan Wright, the narrative follows the men of 1st Reconnaissance Battalion through the U.S. invasion of Iraq in March 2003.

The Marines of 1st Recon overcame incredible odds during their push into Iraq, and later to Baghdad, in stripped-down Humvees, as they fought their way through enemy ambushes, and, at times, battled their own command. Told from the rank-and-file perspective, theirs is a story of battlefield bravery, sacrifice, and camaraderie in the face of arrogant commanders, a spiteful bureaucracy, and strategic incompetence. And in many ways, Generation Kill is a guide to understanding GWOT-era military culture and the power of gallows humor to forge bonds amidst hardship

“I didn’t figure in how fucking fun combat is and how fucking fun it is to invade a country,” Wright told me back in 2016. “Even against all the horror, it’s fun being with people, with a unit, even if I wasn’t a part of it I was there and got to enjoy the camaraderie.”

There are few stories that better capture the unique culture of the post-9/11 Marine Corps than Generation Kill, and nowhere is that more apparent than in a scene that occurs in the first episode involving out-of-regs ‘moostash harrs’ and a curmudgeonly sergeant major.

The scene takes place at a base on the border of Kuwait and Iraq while the Marines of 1st Recon check and make repairs to their equipment, particularly their finicky Humvees, as they prepare for the imminent invasion of Iraq.

As Sgt. Patrick, aka ‘Pappy,’ works on the Humvee, the battalion sergeant major, John Joseph Sixta, is seen storming across the dusty motor pool. “Mr. Potato Head at your six, closing fast,” says Sgt. ‘Fruity Rudy’ Reyes — a fan-favorite from the series and a former Recon Marine who played himself in the show — using a pejorative nickname for Sixta.

The sergeant major immediately lays into Pappy. Not because he failed a mission, shirked his duties, or endangered the lives of his men. No, it was because the length of his mustache was about a quarter-inch longer than it should have been.

“You mocking me?” Sixta says with a twisted grin as he grabs the other grown man’s face.

“Harrs hang’n from your face. Beyond your mouth areas. You are unsightly, unsanitary, and in violation of the Godfather’s grooming standards,” says Sixta, referring to Lt. Col. Stephen ‘Godfather’ Ferrando, the battalion commander for 1st Recon.

Sixta’s anger reaches a fever pitch as he switches to all-caps and screams: “DO YOU READ ME, SGT. PATRICK! You has till o’dark hundred to unfuck yourself.” In the background, a Corpsman with the unit goose-steps by, pointing to the ‘Hitler ‘stache’ on his face, which, inexplicably, is actually within regulations.

At the end of the scene, Pappy remarks that “we all have a job to do, and Sgt. Maj. Sixta’s job is to be an asshole, and he excels at the position.” (Now might also be a good time to point out that the real life Sgt. Maj. Sixta was sentenced to prison on a sexual abuse charge involving a child.)

Related: 10 facts from ‘Generation Kill’ that make us love the series even more

The irony of this encounter is that the Marines are only growing out their facial hair because they were encouraged to do so by their command as a way to boost morale by relaxing the Corps’ normally strict regulations on grooming. Now, the same people who okayed the mustache competition are busting Marines’ chops over it, even as they prepare for heavy combat. (These conflicting priorities are driven home later in the episode when Sixta gives a speech before the Marines step off. Instead of talking about the dangers ahead, as one would expect of the battalion’s top-ranking enlisted Marine, he uses the time to pre-emptively chastise them over grooming standards.)

Despite being a case study in how to alienate and turn your own troops against you, the scene exposes an issue with the command’s priorities, wherein they place greater emphasis on adherence to superficial standards than meeting the requirements of the mission.

The Marines are working with broken or ill-functioning equipment, and have limited supplies — they get their hands on desperately needed batteries from the embedded reporter, who unlike them is able to buy whatever he needs from the exchange at a nearby base. Other pieces of gear have to be begged and bartered for, stolen, or purchased ahead of time, like how Sgt. Brad ‘Iceman’ Colbert and Cpl. Josh Ray Persons had to pay out of pocket for a turret shield for their Humvee.

“It’s like Gilligan’s Island — they’re giving us rocks and coconuts to make radios with,” one of the Marines says of the situation. And while the Corps doesn’t have a monopoly on destroying its members’ morale with fuck-fuck games, it certainly excels at it.

The thinking behind this doctrine of anal-retentiveness, as any incredibly irritated staff noncommissioned officer will tell you, is “If you can’t do the little things how can I trust you to handle the big things?” Often summed up as “excellence in the basics,” on paper it actually sounds quite reasonable. In reality, it can be another thing entirely.

In the case of Sixta, we see what happens when that fixation on control spirals, resulting in a leader who obsessively micromanages the little things at the expense of the big things that matter most, like making sure his guys have the right equipment, or that the right people are in the right positions, for the job ahead. And that’s how you end up with this scene, with the top-ranking enlisted Marine in the battalion more concerned with his own beliefs about what someone’s face scruff says about their effectiveness in combat than a looming military operation.

The military is rife with examples of regulation-mania. One instance involves a battalion sergeant major who made headlines for allegedly forcing Marines to stand extra duty during block leave. Another example occurred during the novel coronavirus outbreak aboard the USS Theodore Roosevelt in March 2020. Emails released to Task & Purpose showed that testing was slowed down over a debate about whether to include social security numbers on COVID-19 testing kits.

None of this is to suggest serving in the military is all bad, or even wholly unpleasant; that’s not even to say it’s half bad. It’s just to say that it brings with it a fair amount of straight up bullshit. That’s not a surprise to anyone who’s served. Wearing the uniform means that for 24 hours a day, 365 days a year, you’re under the thumb, not just of the Uniform Code of Military Justice, but the regulations of your individual service.

Which means that during every hour of every one of those days, you’ll have to consider things like: Am I wearing the right color of socks? ‘Is the hair on top of my head 3 inches, or 3.25 inches,’ for men, or ‘Is my hair in a tight enough bun?’ for women. Am I wearing a belt? How cold are my hands and is it worth the risk to put them in my pockets? Am I 15 minutes early to being 15 minutes early to formation? Do I really have to attend this ‘mandatory’ family fun day on my first day off in weeks? Is anyone watching or can I get away with walking on the grass? Is my mustache trimmed enough? And by extension, am I courting disaster by simply having facial hair?

Each and every one of those things is detailed and specified by a military regulation — and even the ones that aren’t, like reserved parking spots for the command team, are still strictly enforced. This means that every single one of those things can get you in trouble if you do it wrong. It’s one of those well-known facts of military life that rarely makes its way onto the screen. That is why this scene is so relatable: We tend to gloss over the mundane and frustrating aspects of service in favor of drama and high tension but these are the stories service members most often retell at the smoke pit, or recount with old friends years later over beers, long after they’ve gotten out and left it all behind.

As irritating as they are in the moment, they’re the ones you love to complain about with your friends later. As author Sebastian Junger wrote in his book Tribe: On Homecoming and Belonging, service members and vets often look back on their hardships as a “great blessing,” with their experiences at war “remembered more fondly than weddings or tropical vacations.”

“Humans don’t mind hardship,’ Junger wrote. ‘In fact, they thrive on it; what they mind is not feeling necessary. Modern society has perfected the art of making people not feel necessary.’”

Hell, maybe this wasn’t a matter of incompetence, or one guy on a power trip, but part of some grand strategy. As Persons points out later in the Generation Kill: “If Marines could get what they needed when they needed it we would be happy and wouldn’t be ready to kill people all of the time. The Marine Corps is like America’s Pitbull. They beat us, mistreat us and every once in a while, they let us out to attack someone.”

So, in a way, maybe the mustache-growing competition did help boost morale: It gave the Marines a target to turn their anger and frustration toward — their command — and in so doing, gave them something, or someone, to gripe about together. Once he was out of earshot, of course.

Related: What that one scene in ‘Saving Private Ryan’ teaches us about complaining in the military