‘Generation Kill’ Author Evan Wright On The Thrill Of Combat 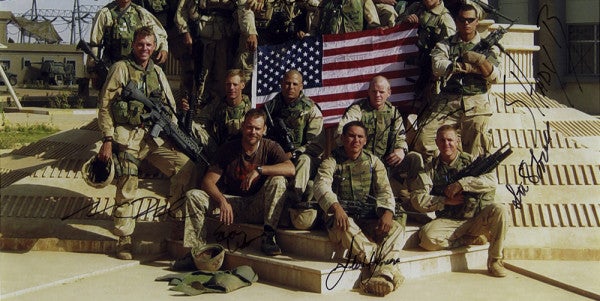 Combat can be fun. As distasteful as that is, it’s also true. Surviving a battle without a scratch is exciting, profound, and invigorating, but what often follows is the sinking realization that you may never feel that alive again.

“It is the most intense, fun thing I’ve ever done,” explains Evan Wright, the renowned author of “Generation Kill,” which detailed his account of the 2003 Invasion of Iraq alongside the Marine Corps’ 1st Reconnaissance Battalion.

Wright told Task & Purpose he finds war simultaneously horrifying and thrilling. That’s what makes it so insidious, for those who go to war, “for the participants, it’s a peak experience.”

Wright spent years covering the military and the wars in Iraq and Afghanistan, alongside Marines, sailors, soldiers, and Army Special Forces as a Rolling Stone reporter. With “Generation Kill,” Wright penned a gritty portrayal of the early days of the Iraq War, offering the perspective of the men who led America’s charge in stripped-down Humvees across the desert into Baghdad.

He studied medieval history at Vassar College and has written for Hustler, Rolling Stone, and Vanity Fair. Wright has authored numerous books and written articles on American subcultures, crime, and war. Currently, he is a writer and producer on Showtime’s “Homeland” and will soon publish his next book “The Seed,” a memoir about brainwashing and the war on drugs.

Wright spoke with Task & Purpose about his experiences with 1st Recon during the Iraq invasion, gallows humor, his wildly popular book “Generation Kill,” and the HBO miniseries of the same name.

What was your initial reaction to the military’s brand of humor and 1st Recon’s in particular?

My first reaction: I loved these guys. The moment I walked in the tent and they were just talking — their attitude, their way of carrying themselves — I just thought they were great and they were really smart.

… What some people take away from “Generation Kill,” the book and the show is “Oh, the wisecracking, smart ass Marines,” but that existed amid their preparations for this really serious thing they were doing. So what was clear to me wasn’t that they were just a bunch of smart asses, it was that they were doing this really serious important work and preparing, discussing all the things they might encounter, and in the midst of that, they were joking. Obviously to deal with the pressure and the stress, and I thought it was great.

That’s something I kind of miss about the military: the use of humor as a way to deal with stress and cope, to make light of things so they don’t overwhelm you.

I have a theory about the transgressive nature of the humor. My theory is when you’re in the military, everything you do is so carefully controlled, and proscribed, and watched. But the one thing that you’re allowed to do is when you’re with your buddies — especially if you’re out of earshot of your superiors — you can fucking say anything you want. More so than in the civilian world. That’s very liberating. Leaving aside the pressure of combat and facing a war, there’s just the pressure of having to serve and be in the chain of command, so the humor and saying crazy shit is another way of dealing with that. It’s also the reward, in a sense, for all the rules you have to follow.

When you guys were doing the push toward Baghdad and riding around in lightly armored Humvees, did you ever have an “oh shit, what the fuck am I doing” moment?

No, strangely enough. It was so interesting and I very quickly had this fatalistic view of what I was doing, so I was never like “I made a mistake,” I often had the opposite thought, like, “Wow, I’m so lucky to be with this unit getting shot at.” The one thing, though, was every time we were shot at, I‘d assume that’ll never happen again, you know, and it’d happen hours later. … But I generally just felt that professionally, and as a person, it was such an amazing, compelling, fascinating experience that I never was like, “I wish I hadn’t come with these guys.” I never thought that.

When you embedded, did you want to see combat?

My fear was always that I would get embedded with a unit that wasn’t doing anything and I’d get stuck with the guys guarding an airstrip somewhere. So, on a professional level, I wanted to be with the unit that was seeing the most stuff. I don’t think that I realized what that meant until we were actually shot at. You know what I mean? It was almost unreal to me, but I wanted it, you know?

Do you think your job as a reporter gave you some mental distance from the danger, or the risk, or any of those fears and concerns?

Yeah, definitely. I took notes continuously. The MOPP suit, it had this great pocket on the shoulder of the sleeve, the upper-shoulder pocket was at an angle and it perfectly fit my notebook and it was this great design — I always had my notebook right there. At one point we were getting shot at, and mortars were coming in and we were static and were ordered to stay there. I was taking notes and my hand was shaking so badly the notes were basically unreadable, so I stopped taking notes. And then, as soon as I stopped, I began to panic and I thought, “I’m gonna fucking lose it,” and I started taking notes again and I realized in that moment — the note-taking and then in the larger sense — being there as a reporter is what gave me a sense of purpose and a role and an artificial sense of safety.

In the military, in general, and infantry units, in particular, combat is the rite of passage. Given your experience, is that something that resonates with you?

Yes and no, because I think that I was 20 years older than everybody I was with. I had no training or background to prepare me for combat, but I had done police ride-alongs, I’d covered criminals, I’d done things that were scary to me. I don’t know how dangerous they were really, but, to me, they were scary. Also I was older and had dealt with a lot of issues in life that were scary and actually much harder than combat, and I had this big advantage that I had been through a lot of rites of passage that these young Marines hadn’t. But at the same time, going through combat with them really gave me a certain sense of confidence that I’m sure not all of my peers have, because they haven’t had that experience. Deliberately facing death is a very powerful experience and if you’ve willingly done it, you know you can face it.

When I was in Afghanistan on my first deployment, one of the photographers with us told me the best war photos he’d ever taken were of the eyes — up close, powerful portrait shots — he said that was the heart of a good war photo. In your opinion, what’s at the heart of good war reporting?

It’s exactly the same. It’s the characters. It’s also not having an agenda. Again, it’s not knowing in advance what you think the story is going to be. Immerse yourself in the characters and try to understand their experiences and, in the end, you have to be very critical as a reporter, but it’s the characters. I tried to weave the bigger picture into “Generation Kill,” but my material was the small unit and how they were reacting to the war. … It’s not showing people as they ought to be, or as you want them to be, or as they should be, but as they are. That’s something the reporter has to deal with on his or her own.

Did you have any misconceptions about war and the military prior to Iraq and Afghanistan?

It’s funny because I never had any preparation for war or anything, but I was pretty comfortable with it. … But I think the one powerful thing about it was if you don’t get seriously wounded, I didn’t figure in how fucking fun combat is and how fucking fun it is to invade a country. Even against all the horror, it’s fun being with people, with a unit, even if I wasn’t a part of it I was there and got to enjoy the camaraderie. … One of the things I think people need to realize is that when vets return from war: There’s a huge comedown from that peak experience where you and your rifle are god. You are in charge of life and death matters and you come home and there’s nothing that can equal that thrill. The thrilling excitement of war, especially if you never got seriously injured, is something we need to reckon with.