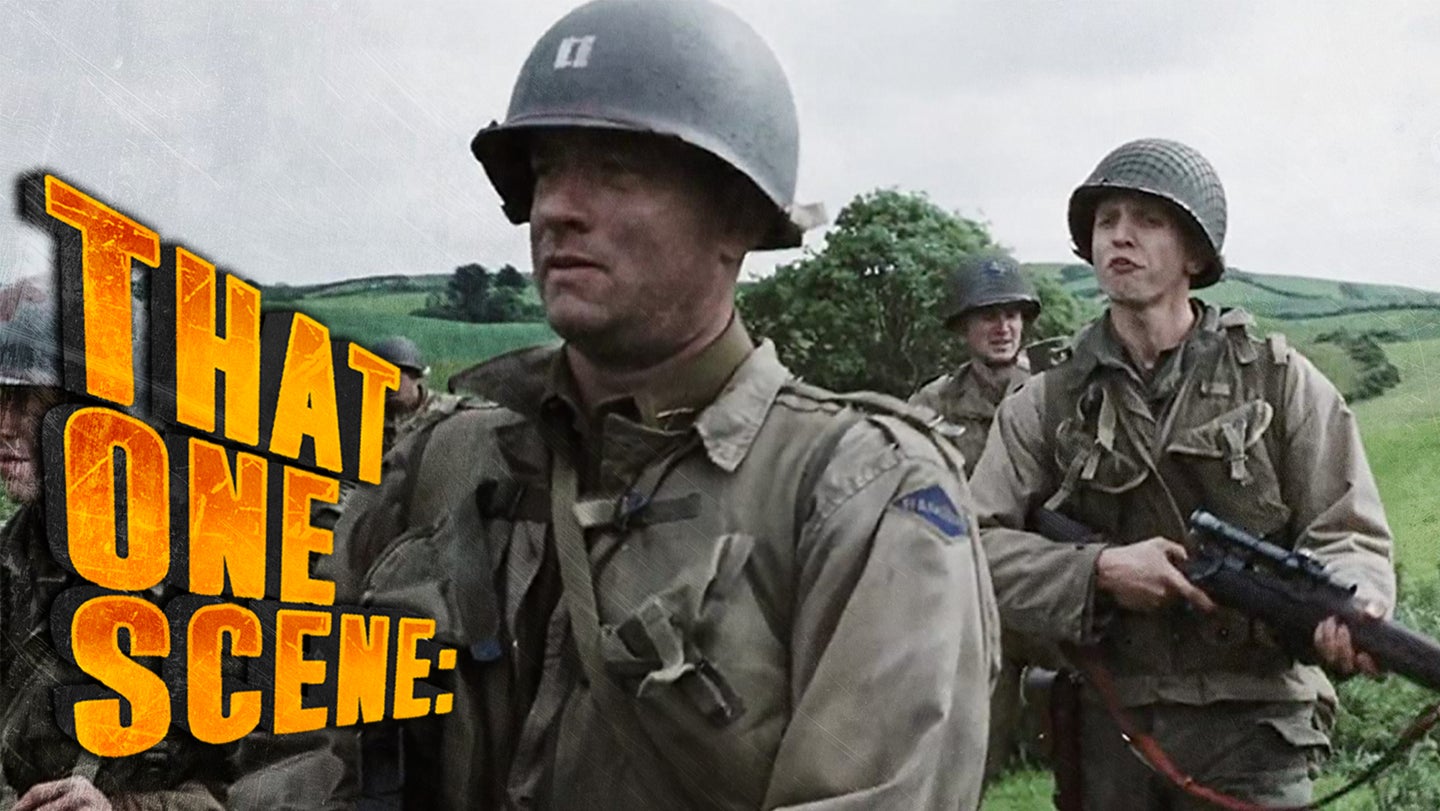 When done right, something as simple as airing a grievance can rise to the level of art.

You’ll find no better evidence of this than among rank and file service members. After being given a bullshit assignment, say, painstakingly creating a PowerPoint presentation for a full-bird colonel that everyone is going to sleep through, a particularly disgruntled soldier, sailor, airman or Marine can turn their frustration into a masterful soliloquy about senior commanders who say they want the ‘ground truth’ but somehow think they can get it from a series of slides instead of, you know, going outside the wire.

Did the first sergeant order a bunch of Marines to fill sandbags, then realize they actually needed to fortify a different location, so those bags will have to be emptied, then refilled over there? Well, there will likely be a profanity-laden-TED-Talk about the gross misuse of taxpayer-funded manpower coming to the smoke pit in the near future.

Service members forced to attend a mandatory family fun day on their first Saturday off in weeks? Expect to overhear some choice words about why retention is such a challenge these days. Did the platoon sergeant order his soldiers to check in three times a day, every day (even weekends) after getting back from a long and rough deployment downrange? There’s a good chance that someone in that unit will burst into a tirade about how the military will entrust them with millions of dollars in equipment and empower them to make life and death decisions, but the moment they’re back in garrison the flak and Kevlar come off, and the baby diapers go on.

If complaining is an art form — and it most certainly is — then the U.S. military is the Juilliard School of Bitching.

As Nick Nolte famously pointed out in “The Thin Red Line,” another World War II movie, this time about the Pacific Campaign, complaining goes hand-in-hand with military service: “The only time you worry about a soldier is when he stops bitching.”

But there are some basic ground rules to follow if you hope to distinguish your frustrations from run-of-the-mill whining, and something more memorable. There’s no better on-screen example of how to do that than this scene from Steven Spielberg’s 1998 World War II drama “Saving Private Ryan”:

The moment comes early on in the film. After the D-Day landing at Omaha Beach — which is worthy of its own scene breakdown, and that’s why we did exactly that — Capt. John Miller, played by Tom Hanks, is ordered to take a squad of Rangers and head into an active warzone on a “public relations mission,” as he calls it.

The objective: find and bring home Pvt. James Ryan, a paratrooper who dropped somewhere into Normandy on June 6, 1944. Unbeknownst to him, Ryan’s three brothers were killed in separate operations. To spare his mother the anguish of losing all of her children to the war, the powers that be mandated Ryan be found and brought home at all costs.

The mission poses a moral question, not just for the audience, but for the soldiers who are given the task: Is it worth the risk to endanger the lives of eight men to save one in the hopes of minimizing a family’s grief? The question isn’t one I can answer. But it’s the driving theme of the entire film and one that’s never fully resolved, though by the time the credits roll, the hope is that it was worth the incredible cost.

Immediately after setting out, one of the more vocal Rangers, Pvt. Reiben (played by Edward Burns) addresses the squad and asks: “Do you want to explain the math of this to me? Where’s the sense of risking the lives of the eight of us, to save one guy?”

While Reiben is most definitely complaining, he’s mostly laying the groundwork for what’s to come; setting the stage if you will, so that the rest of the squad can chime in.

Wade, the squad’s medic does, and points out that Reiben should “think of the poor bastard’s mother” to which Reiben replies that they’ve all got mothers, “shit, I bet even the captain’s got a mother,” he says, before backtracking. “Well, maybe not the captain, but the rest of us got mothers,” alluding to the mystery of their leader’s background.

It’s your run of the mill grumbling and whining at this point: Soldiers airing their grievances after getting a bum assignment, though in this case ‘suicide mission’ is more apt. Cpl. Upham (Jeremy Davies), a linguist and a new-join to the squad tosses out an Alfred Tennyson quote — wrong crowd, bud — and is quickly mocked by Pvts. Mellish (Adam Goldberg) and Caparzo (Vin Diesel).

However, the bar is significantly raised when Pvt. Jackson, or ‘Bumpkin’, the unit’s southern-twanged sharpshooter chimes in.

“By my way of thinking, sir, this entire mission is a serious misallocation of valuable military resources,” Jackson begins.

“Well, it seems to me, sir, that God gave me a special gift; made me a fine instrument of warfare… Well, what I mean by that sir, is that if you were to put me and this here sniper rifle anywhere up to, and including, one mile of Adolf Hitler with a clear line of sight, sir. Pack your bags, fellas, war’s over. Amen.”

As Miller points out in the midst of the speech: “this is the way to gripe.” Jackson’s monologue is performative, yet contains a kernel of truth. He may be exaggerating his own abilities — though seeing as he speedily acquires, shoots, and kills a German sniper during a later battle, there might be something to his boast — he still raises a good point. Sending a squad of well-trained, battle-tested Rangers stomping around France to aimlessly search for one soldier out of thousands during an active invasion with an uncertain outcome sounds exactly like “a serious misallocation of valuable military resources.”

Or in the words of Mellish and Caparzo it’s “FUBAR,” military slang for “fucked up beyond all recognition.”

With his rant over, Jackson perfectly demonstrates one of the golden rules of any successful complaint: Make it entertaining. Whether it’s with gallows humor, or outright bravado, if everyone is laughing and smiling darkly, you’re doing it right. It has the benefit of letting everyone within earshot know you think this is a terrible no good very bad idea, without bringing folks down by pointing out that you’re all probably going to die for no good reason.

The second part of the scene lays out when to gripe, and who to gripe to. While complaining may be a constant of military service — and if social media is any indicator, of life in general — there’s a time and place for it.

After Jackson wraps up his masterful rebuke of the top brass for sending them on this wildly dangerous wild goose chase, Reiben remains unconvinced, and so he asks Miller, a captain, if he sees any issues with the plan.

And Miller’s not wrong: Leaders shouldn’t be whining to their troops, in large part because they’re the ones giving the orders everyone’s grumbling about in the first place. In much the same way as shit rolls downhill in the military, “gripes go up” the chain of command, as Miller points out.

Undeterred, Reiben presses on: “Say you aren’t a captain, or I’m a major. What would you say then?”

To which Miller brilliantly responds with a straight face: “Well, in that case, I’d say this is an excellent mission, sir, with an extremely valuable objective, sir, worthy of my best efforts, sir. Moreover, I feel heartfelt sorrow for the mother of Pvt. James Ryan. And I’m willing to lay down my life and the lives of my men — especially you, Reiben — to ease her suffering.”

Ultimately, the scene, much like complaining in the military, is about camaraderie more than anything else. Contrary to popular belief, or what your CO tells you, and regardless of conflicting scientific studies about how complaining is bad for your health, or good for your health — one thing is certain, bitching is most definitely good for the soul, and good for morale.

Very rarely does anyone complain as loudly and with as much style, as the soldiers in “Saving Private Ryan” do with the intention of actually convincing anyone to change their mind. Rather, it’s to let everyone know that you know it’s bullshit and invite them to join in on calling it what it is.

To underscore that point, the scene ends with the Rangers marching on in slightly better spirits. Concerns raised. Venting done. Now it’s time to get that damn private and bring him home, hopefully before some general decides they should go on a search and rescue mission for a beloved unit mascot last seen in the Ardennes Forest.