The Sgt. Maj. of the Army wants leaders to stop scheduling training just for the sake of it

"Stand up for your people." 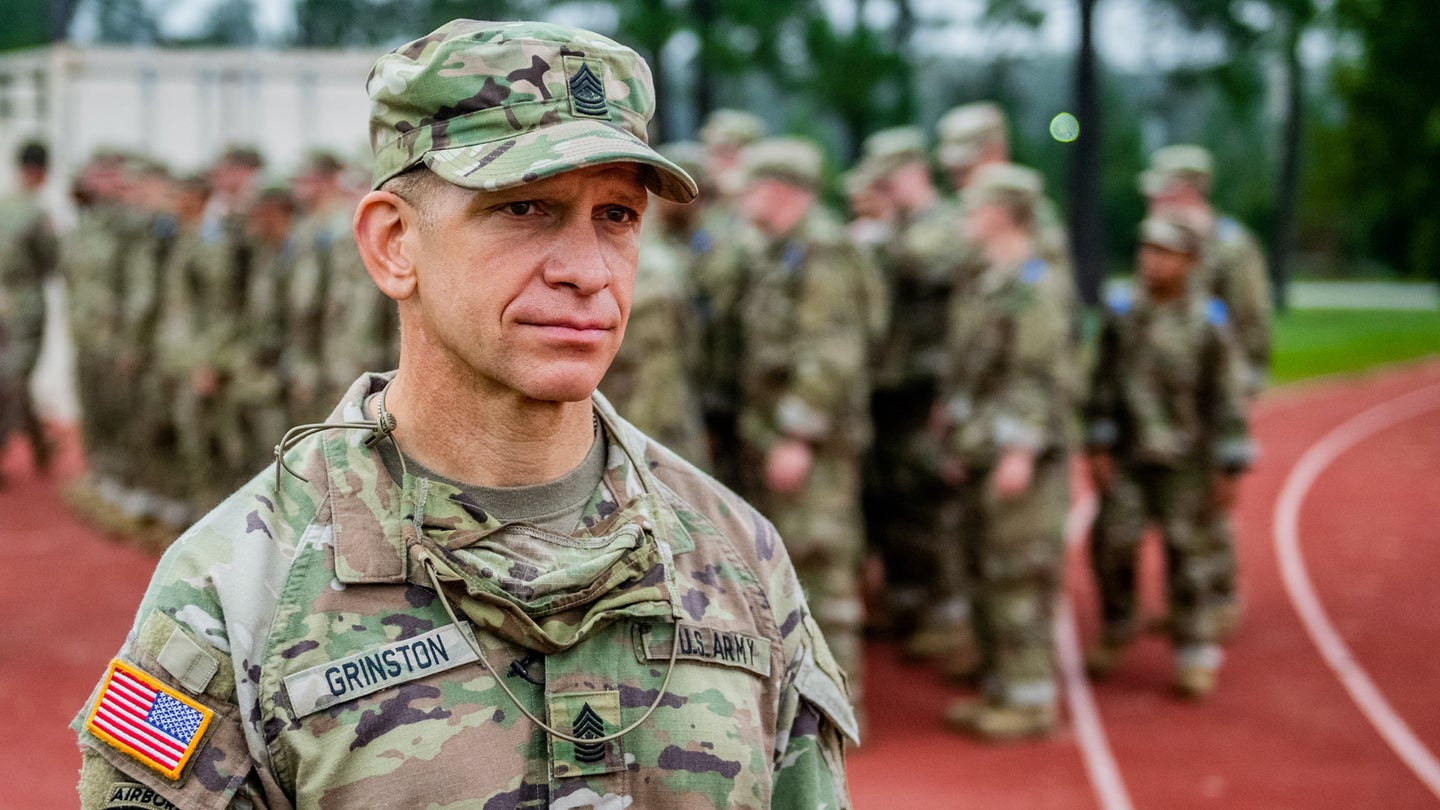 Sgt. Maj. of the Army Michael Grinston visits the Maneuver Center of Excellence and Fort Benning to observe one station unit training including the 1st 100 Yards, a training event to teach Warrior Ethos and esprit de corps, Oct. 22, 2020. (U.S. Army/Patrick A. Albright).
SHARE

The concept of “free time” is not exactly a priority in the military. There’s almost always something else to do or somewhere else to be.

But maybe, according to Sgt. Maj. of the Army Michael Grinston, a bit of a break is exactly what some units need.

At the Association of the U.S. Army’s annual conference this week, Grinston told enlisted leaders that they needed to “stand up” for their soldiers, and sometimes that includes making time for them to rest and recover from training, or if not that, then they should at least take some time to get to know the people they lead. It’s a crucial piece of the Army’s “People First” initiative which hinges on putting the wellbeing of soldiers and their families first as a means to improve a unit’s readiness. It makes sense: Knowing your soldiers means knowing how they’re doing, what challenges they’re facing, and what’s important to them.

“[S]ome organizations are now giving mandatory white space,” he said at the AUSA forum, referring to a period of time that’s left intentionally blank on a unit’s schedule. “And I encourage you all to do that. Say no, you are not allowed to put anything on the calendar so that soldiers could just talk to their people. I think we’ve got to do more of that.”

He told one story about sitting in on an unnamed battalion’s training meeting, where he heard the commander talking about all of the training they had on the schedule: an exercise on Friday, and on Monday the unit was going “right back to the field” for two weeks, and then would do a 26-mile foot march as soon as they came out of the field.

He went on to urge nominative sergeants major to remind commanders of the Army’s holistic health and fitness approach. The approach requires leaders to not just prioritize physical fitness, but also mental and spiritual wellness as well as nutrition and getting enough sleep. But it’s been a tough sell.

It’s not the Army way to leave white space on the calendar, Grinston said — ”If there’s anything white on the calendar it’s like the worst thing on the planet” — but sometimes taking care of your people means doing exactly that.

It all comes back to what he and other Army leaders have been relentlessly pushing for the past two years: Building cohesive teams, because tight-knit units will likely have fewer instances of sexual assault or harassment and fewer suicides. To build a cohesive team, Army leaders say, superiors need to know their subordinates, and soldiers need to trust that their leaders will have their backs.

The Army is never going to run out of things to tell leaders to do, Grinston said, which means they have to stand by their decision to do whatever it is they need to do to put their people first. That might mean checking in with soldiers, calling their families to introduce themselves so the family members know who to contact in case of an emergency, or visiting soldiers’ homes to see how things are going, as Grinston said he recently did with his team.

“I shut the door and I told the [Chief of Staff], I said, ‘I’m going,’” Grinston said. “A lot of times we’re not even willing to shut the door and tell our boss this is important for my organization and I’m going to go do it.”

Ultimately, Grinston put it this way: Either you take the time to do these things now, or you could find your unit “consumed” by something even worse, that will demand even more time and attention.

“Take care of your people. It doesn’t take a lot of time,” he said. “If you don’t have time to go do those small things, you may find yourself consumed with something extremely bad and it will consume all your time and you will do it. If you have a death in that organization, you still stop everything you’re doing. So you might as well stop everything you’re doing and call your people and know their families before something really bad happens in that organization.”