Soldiers trading dip for a technical may be the most Army story ever. 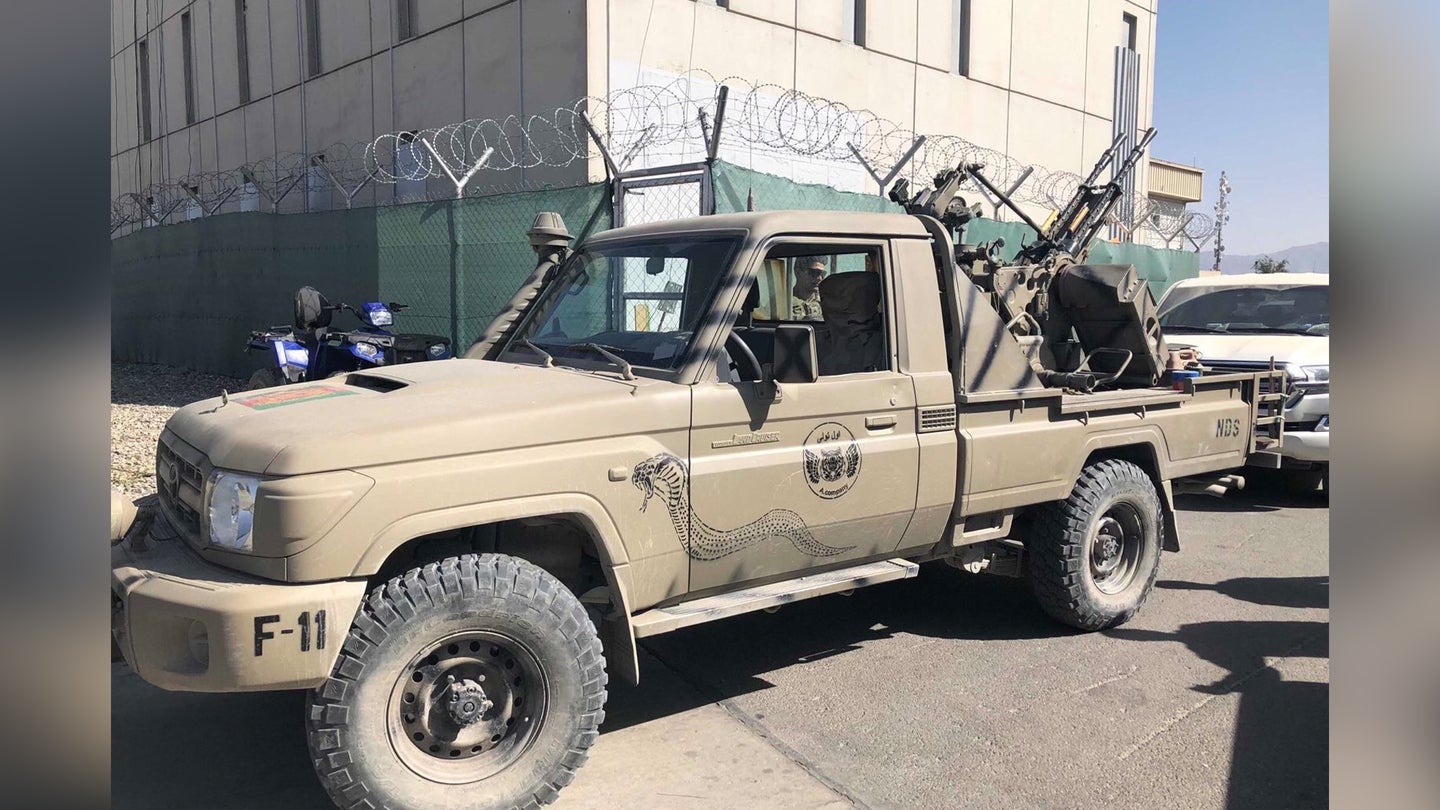 When U.S. forces arrived at the Hamid Karzai International Airport in Kabul, Afghanistan, in August, they had their work cut out for them: A tidal wave of people, Americans and Afghans alike, were rushing to the airport to flee as the Taliban regained control of the country.

Most of the security posts around the perimeter of the airport had been abandoned, said Lt. Col. Andy Harris, commander of the 1st Battalion, 504th Parachute Infantry Regiment. Soldiers with the battalion quickly set about bolstering the airport’s defenses, yet the situation remained volatile — Taliban fighters were just meters away, outside the airport’s gates — and much of the equipment they’d typically use, like heavy vehicles and machine guns, had yet to arrive at the airport.

What they did have, however, was a green pickup truck outfitted with an anti-aircraft gun. The paratroopers had traded two cans of dipping tobacco for it.

That piece of the story from those first few days in Kabul could soon be coming to the 82nd Airborne Division Memorial and Museum at Fort Bragg, North Carolina. The truck served as a primary deterrent to Taliban fighters as U.S. troops landed in Kabul to assist with the massive evacuation effort there. And the only reason U.S. troops knew how to use it was thanks to an Army paratrooper born in Iraq, who served six months of a mandatory service obligation in the Iraqi military before coming to America.

The truck, which is currently in Kuwait awaiting approval to be brought to the U.S., is a symbol of the “ingenuity of the American soldier,” Harris said, proving that “when you put us on the ground, and you give us a task and a mission, through any means necessary we’re going to accomplish that mission.”

But had it not been for Pfc. Alsajjad Al Lami, the Iraqi-born U.S. Army soldier, the Toyota Land Cruiser might have remained where it was, abandoned by Afghan forces, instead of being used by American troops to guard the airport and keep the surrounding Taliban fighters at bay.

“What the American paratrooper did for those two weeks, most people will probably never know and most won’t care,” Harris said. “But I know what they did, and it was remarkable. It was a hell of a feat.”

‘They gave us the keys for two cans of dip’

It was just after 7:00 am local time on Aug. 16 when Harris landed at HKIA. It was his sixth time deploying to Afghanistan — his first was in 2005 — but unlike his previous tours as part of an open-ended mission in America’s longest war, this time he was there to see to its end.

Soldiers with the 1st Battalion, 504th Parachute Infantry Regiment were joining other Army and Marine infantry units deployed to Kabul to assist with the evacuation of vulnerable Afghans and American citizens in the wake of the Taliban’s takeover of Kabul.

For much of those first few hours, Harris told Task & Purpose, he and his soldiers were tasked with clearing the airport, redirecting Afghan civilians who had poured inside the gates in the hopes of getting on an airplane, and beefing up security around the perimeter to keep those in the airport safe, which for Bravo Company involved linking up with an Afghan unit already there.

Like the entire deployment to HKIA, it was a precarious situation: On the other side of the airport’s walls, Taliban fighters operated openly, at times standing within 30 meters of U.S. troops, if not closer.

“From the 24 hours into it, until the moment I boarded an aircraft and I left, I talked to [the Taliban] every day and we lived about 100 feet, 200 feet from each other, every day, all day long,” Harris said.

Because Harris and his soldiers were some of the first to arrive in Kabul, they were light on equipment. The focus was getting troops into Kabul, he said, which meant there wasn’t much room for “our heavy equipment or vehicles with our heavy machine guns.”

“We just had our basic weapons, we didn’t have any heavy machine guns, any gun trucks or anything,” said Pfc. Al Lami.

But the Afghan forces had their own gear, including an olive green Afghan National Army truck mounted with a Russian-made 14.5mm ZPU-2 anti-aircraft gun. On Aug. 17, when the Afghan troops informed Bravo Company that they were moving to another area of the airport, the paratroopers asked if they wouldn’t mind handing over the keys.

“There were two guys standing by the truck, and we asked them if they had the keys,” Al Lami said. “They were like, ‘Yeah we do have the keys.’ And they gave us the keys for two cans of dip.”

Al Lami, 25, was born and raised in Iraq. He said his father worked as a translator for the U.S. military there, which instilled in him a deep desire to serve in the U.S. Army. After he graduated high school, Al Lami said he had to complete a mandatory service obligation in Iraq’s military, but he only ended up serving for six months before he left for college in the U.S.

During his first year in the U.S, Al Lami said he lived in North Dakota while he waited for his green card. He eventually moved to Texas where he enrolled in the University of Texas at Austin, and got married. But Al Lami said he was in “a hard situation financially” which eventually forced him to leave his studies behind, and when he got divorced he figured 2020 was as good a year as any to finally join the Army.

“I always wanted to join, and it felt really good,” Al Lami said of enlisting. “When I went to the station and they asked what [military occupational specialty], I was like, an MOS so I can actually deploy and actually do something. They were like ‘infantryman?’ I was like, ‘I’m good, I’m down with infantry.’ … I’m not the type of guy that wants to sit behind a desk.”

It’s hard to imagine the stars aligning any more perfectly for Bravo Company than they did on Aug. 17. They had the keys to the Toyota mounted with an anti-aircraft gun, which was making the Taliban roughly 100 feet away think twice about stepping out of line. And they had a paratrooper uniquely qualified to teach the rest of them how to operate it: Al Lami knew how to work the ZPU-2 thanks to his short stint in the Iraqi military.

Al Lami was “very familiar with the ZPU-2 that was mounted to this Land Cruiser,” Harris, Al Lami’s battalion commander, said. “So he gave a class to all my paratroopers in Bravo Company on how to use it, how to do barrel changes, how to load it, so all of those individuals that would take turns on the line providing security, they understood how to use the weapons system.”

Al Lami, who also worked as a translator when he and his company first arrived at HKIA, said it felt “really good” to be able to teach his “fellow soldiers something new, something they’ve never used before.”

For days, the ZPU-2 was used by American troops as a show of force to the Taliban on the other side of the airport’s gate. Harris said when the company was tasked with moving to another area at HKIA, they took the truck with them to “show [the Taliban] that hey, here’s the platform that we have, and we’re in a defensive posture as well.”

“Obviously we had other firepower at our disposal that they probably are less familiar with,” Harris said of the Taliban. “But that’s the one thing they could see that like okay, they’ve got a significant deterrent capability.”

As the U.S. neared its deadline of withdrawal in Afghanistan, Maj. Gen. Christopher Donahue, the 82nd Airborne Division commander, noticed the vehicle his soldiers were using. Harris said they explained the story to Donahue of how they acquired it and how they learned how to operate it.

Donahue made clear that if there was any space on an aircraft before the last U.S. plane left Kabul, he wanted the truck on it.

‘We did a damn good job’

News of the truck’s voyage began circulating this week on social media after an article from RedState, a conservative blog, said Donahue ordered 50-100 people off of a C-17 transport plane to make room for the truck.

Col. Brett Lea, a spokesman for the 82nd Airborne Division, said that’s not even close to the truth.

“No personnel were removed from any aircraft departing HKIA to make room for the Taliban Hilux,” Lea said in a statement to Task & Purpose. “In fact, aircraft space was not an issue at all in terms of getting American citizens, Afghan SIVs, or at-risk Afghans out of HKIA in the final days of the evacuation mission.”

Donahue formally requested the vehicle be approved to come to Fort Bragg in an Aug. 27 memo to Lt. Gen. Ronald Clark, the commander of U.S. Army Central. Donahue said that if approved, the truck would “be placed outside the [82nd] Airborne Division War Memorial and Museum,” Donahue wrote, adding that the 82nd Airborne’s operations sergeant major “has verified that this artifact is demilitarized.”

In a memo on Sept. 27, Lt. Gen. Clark recommended Donahue’s request for approval by the chief of staff of U.S. Central Command, who has final approval authority.

In a statement to Task & Purpose, Donahue said the story of the truck is “emblematic of the grit, discipline, and extreme competence” his paratroopers displayed at HKIA.

“This truck will sit at the 82nd Airborne Museum so that our Paratroopers, their families and future generations to come will know that when faced with a mission of unprecedented scope and complexity, the Paratroopers rose to meet this challenge,” Donahue said.

While many of the other soldiers left a few days earlier, Al Lami said he was chosen to stay behind because of his familiarity with the ZPU-2. At the end of the mission in Kabul, he and Harris were some of the last troops flying out of Afghanistan.

Harris said that he’s “extremely proud” to have served alongside his soldiers, soldiers from the 10th Mountain Division, and the Marines also serving at HKIA.

“I haven’t even really took the time to think about the last 20 years in Afghanistan,” Harris said. “But all I know for myself, personally, is that when the nation calls, when they ask us to do a certain mission set, that’s what we do in the military. We answer our nation’s call. … We did a damn good job.”