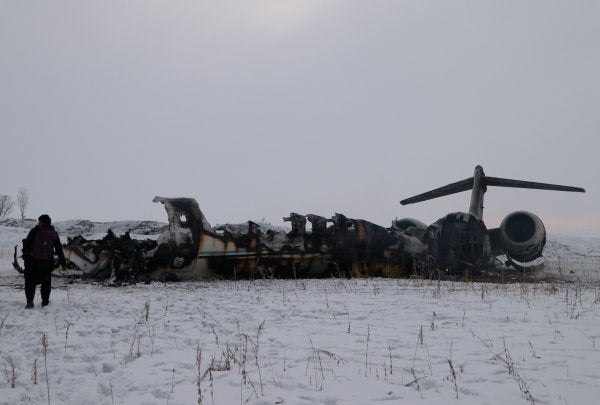 Goldfein spoke about the crash at the Center for a New American Security think tank in Washington, D.C. He said he did not have much information about the incident.

“A U.S. Bombardier E-11A crashed today in Ghazni province, Afghanistan,” Army Col. William “Sonny” Leggett, a spokesman for the U.S. military in Afghanistan, said in a statement. “While the cause of crash is under investigation, there are no indications the crash was caused by enemy fire. We will provide additional information as it becomes available. Taliban claims that additional aircraft have crashed are false.”

A total of four E-11As are assigned to the 430th Expeditionary Electronic Combat Squadron at Kandahar Airfield, according to Air Force Magazine reporter Brian Everstine.

The plane went down in an area that is partially controlled by the Taliban. A 32-second video of the crash site has been posted to Twitter.

We have a clear footage now of the crashed plane. #Ghazni #Afghanistan pic.twitter.com/onlMjFiOma

Defense Secretary Mark Esper had little to say when he was asked about the crash at a Monday Pentagon news conference.

“I am aware of the situation,” Esper said. “I have nothing further to report at this time. As the matter develops and we develop it we will update the media.”

U.S. Central Command is monitoring the situation and will provide more information when it is possible to do so, said CENTCOM spokeswoman Army Maj. Beth Riordan.

The Taliban tweeted a statement claiming that CIA officers aboard the plane were killed.