"Let their legacy of service and ultimate sacrifice be an enduring example for each of us." 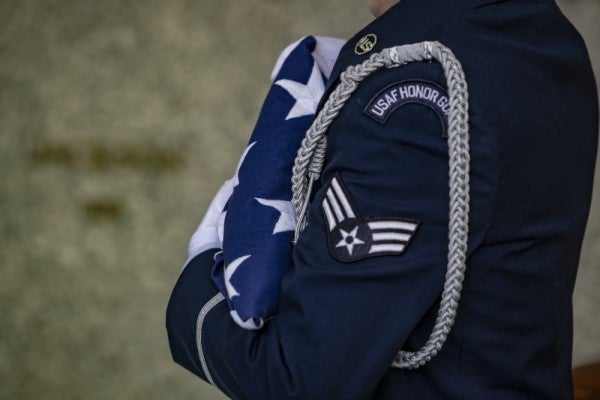 The Department of Defense identified the two airmen who were killed in a plane crash in Afghanistan on Monday. Lt. Col. Paul K. Voss, 46, of Yigo, Guam, and Capt. Ryan S. Phaneuf, 30, of Hudson, N.H., were both in an E-11A surveillance aircraft when it crashed in Ghazni Province.

The cause of the crash is still under investigation, DoD said in a release. Though Taliban forces took responsibility for the crash, U.S. military officials stressed that there were “no indications the crash was caused by enemy fire.”

The plane went down in an area partially-controlled by the Taliban. Immediately after the crash, the Taliban ambushed Afghan security forces attempting to reach the plane. Later, the U.S. Navy's elite SEAL Team 6 recovered two bodies and a flight recorder from the site and destroyed sensitive military equipment there, according to reports from Connecting Vets and Newsweek.

DoD said Voss was assigned to Headquarters Air Combat Command at Joint Base Langley-Eustis, Va. Meanwhile, Phaneuf was assigned to the 37th Bomb Squadron at Ellsworth Air Force Base, S.D.

An Air Force spokeswoman told Task & Purpose that Voss was a prior enlisted airman with 25 years of active duty service. His call sign was “TABS,' he was the chief of exercises within Air Combat Command's directorate of operations and he was the pilot of the E-11A when it crashed, the spokeswoman said.

“It's really hard to describe how sad we are at the loss of two great Airmen,” he said in a statement. “Lt. Col. Paul Voss was our brother and teammate.”

According to the public affairs office for the 28th Bomb Wing at Ellsworth, Phaneuf was a B-1 bomber with a long list of awards and decorations, including the Air Force Commendation Medal, the Meritorious Unit Award, and the Air Force Outstanding Unit Award.

“This is a tragic loss to the Air Force and our Ellsworth Family,” said Col. David A. Doss, commander of the 28th Bomb Wing, in a statement. “Every uniformed and civilian Airman assigned to Ellsworth is a valuable member of our team and this Airman will be greatly missed by all.”

“We send our heartfelt condolences to the families and friends of Lt Col Paul K. Voss & Capt Ryan S. Phaneuf, who lost their lives in an E-11A crash in Ghazni Province, Afghanistan,” tweeted Air Force chief of staff Gen. David Goldfein. “Let their legacy of service and ultimate sacrifice be an enduring example for each of us.”

“Our hearts are with the families & friends of Lt Col Paul K. Voss & Capt Ryan S. Phaneuf,” tweeted Secretary of the Air Force Barbara Bennett. “The Air Force lost these two brave Airmen in their support of Operation Freedom's Sentinel. Their service & dedication to our nation will always be remembered.”

The U.S. Bombardier E-11A are business jets refitted with communications equipment that can link ground troops together, reported Business Insider. Four of them operate out of Kandahar airfield, Business Insider reported.