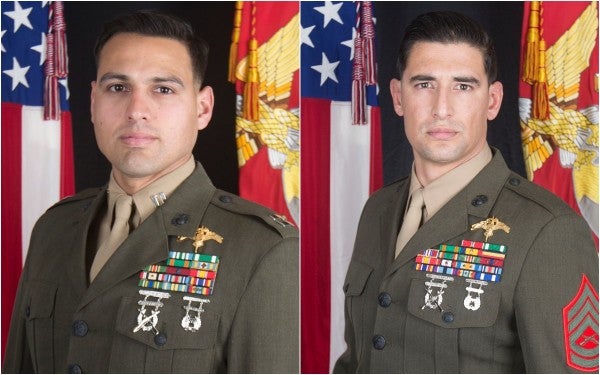 Two Marine Raiders who were killed on Sunday in Iraq have been identified as Gunnery Sgt. Diego D. Pongo, 34, and Capt. Moises A. Navas, 34, defense officials have announced.

The Marines were killed in a battle to clear ISIS fighters from a well-defended cave complex, New York Times reporters Thomas Gibbons-Neff and Eric Schmitt revealed.

“Both men epitomize what it means to be a Marine Raider,” Col. John Lynch, commanding officer of the Marine Raider regiment, said in a statement. “They were intelligent, courageous, and loyal. They were dedicated leaders, true professionals in their craft, and willing to go above and beyond for the mission and their team.”

Pongo enlisted in the Marine Corps in 2004 and initially served as a rifleman, according to MARSOC. He went on to become a scout sniper and deployed to Afghanistan as a sniper team leader. He became a Marine Raider in December 2011 and deployed to both Iraq and Afghanistan.

His military awards include the Bronze Star with “V” device for valor, the Purple Heart, and two Combat Action Ribbons. He is survived by his daughter and parents.

“The command as a whole became witness to his dynamic personality, and love for family, when he brought his mom to this past year’s Marine Corps Birthday Ball ceremony and together they out-danced the rest of us on the dance floor,” Lynch said. “He also loved going on adventures with his daughter, hiking, camping, and woodworking.”

Navas also enlisted in the Marine Corps and he rose to the rank of sergeant before earning his commission in 2010. He went from serving as an administrative clerk to becoming an infantry officer and ultimately a Raider in 2016. He was on his third deployment to Iraq as a Raider.

His military awards include the Purple Heart, Combat Action Ribbon, two Good Conduct Medals, and the Military Outstanding Volunteer Service Medal. He is survived by his wife, daughter, three sons, parents, and brother.

“Capt. Navas, who was known to most as ‘Mo,’ was born in Panama but grew up in Maryland,” Lynch said. In addition to being a phenomenal Marine officer and Raider, he truly was a family man, and cherished his time watching his children play sports. He was also a scout sniper, a martial arts instructor, combat diver, and was recently selected for promotion to the rank of major.”