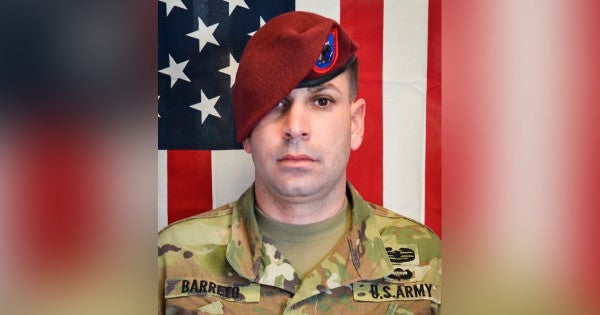 The Pentagon has identified a soldier killed in a car bombing in Afghanistan on Thursday as Sgt. 1st Class Elis A. Barreto Ortiz.

Barreto, 34, from Morovis, Puerto Rico, was killed in a blast from a car bomb that was detonated close to his vehicle near the U.S. Embassy in Kabul.

“With honor and courage, Sgt. 1st Class Barreto answered our nation's call to deploy and serve in Afghanistan,” Col. Arthur Sellers, commander of the 3rd Brigade Combat Team, said in a statement. “In this most difficult time, his loved ones are now surrounded by a community of love and caring by members of our Paratrooper Family Readiness Group.”

The Taliban claimed responsibility for the bombing, which also killed a Romanian soldier and 10 civilians. More than 40 others were wounded. The incident is under investigation, a Pentagon news release said.

Barreto, who leaves behind a wife and children in Cameron, North Carolina, first joined the Army in 2010.

Barreto is the 19th U.S. service member to be killed in Afghanistan in 2019.