'When our nation called for its best Airborne Combat Engineers to deploy into harm's way, Staff Sgt. McLaughlin and Pfc. Villalon answered without hesitation.' 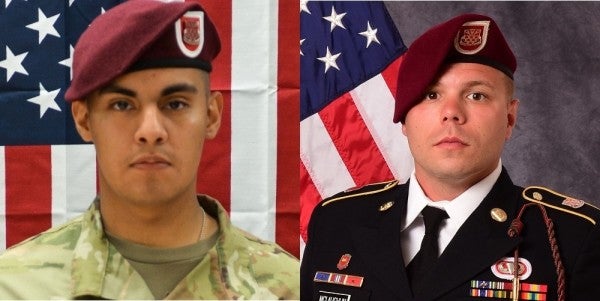 The Pentagon has identified two paratroopers killed in Afghanistan as Staff Sgt. Ian P. McLaughlin and Pfc. Miguel A. Villalon, both of whom were assigned to the 307th Airborne Engineer Battalion, 3rd Brigade Combat Team, 82nd Airborne Division, defense officials announced on Sunday.

McLaughlin, 29, and, Villalon, 21, died on Jan. 11 after their vehicle that was hit by a roadside bomb in Kandahar Province, a Defense Department news release says. The incident is under investigation.

“These paratroopers represent the very best of our nation and our Army,” Maj. Gen. James Mingus, commander of the 82nd Airborne Division, said in a division news release. “Three time volunteers, they went when our nation called and paid the ultimate sacrifice. They will be honored, mourned, but never forgotten and we are committed to taking care of their families for life.”

McLaughlin is survived by wife and four children. He joined the Army in 2012 and graduated the U.S. Army Advanced Airborne Jumpmaster Course in 2018. This was his first combat deployment.

Villalon was also on his first combat deployment. He joined the Army in 2018 and he is survived by his parents.

Both paratroopers have been awarded the Purple Heart, Bronze Star, Combat Action Badge, and other military decorations.

“When our nation called for its best Airborne Combat Engineers to deploy into harm's way, Staff Sgt. McLaughlin and Pfc. Villalon answered without hesitation,” their brigade commander Col. Art Sellers said in the news release. “They lived their motto, 'Essayons,' and embodied the values of the All American Engineer. Their loved ones are now surrounded by a caring community offering comfort and assistance through this difficult time.”