‘I do not call it a tragedy, I call it a glory’ — A paratrooper killed in Afghanistan left behind a powerful message a year before his death

Before his graduation from Bryan High School in 2018, Pfc. Brandon Jay Kreischer — the 20-year-old soldier who was killed in an apparent insider attack in Afghanistan's Kandahar Province on July 29 — laid out his sense of duty to country in his senior yearbook quote in response to the question "Who Am I?' 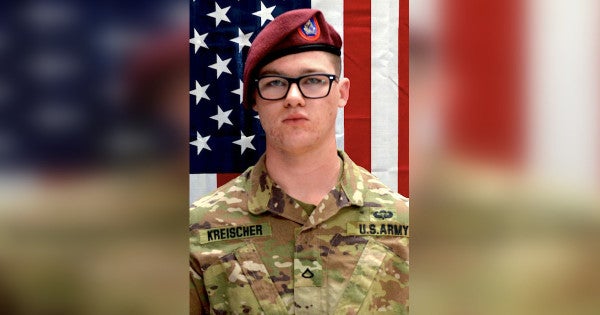 The happiest day of Pfc. Brandon Jay Kreischer's life was the day he enlisted in the U.S. Army.

Before his graduation from Bryan High School in 2018, Kreischer — the 20-year-old soldier who was killed in an apparent insider attack in Afghanistan's Kandahar Province on July 29 — laid out his sense of duty to country in his senior yearbook quote in response to the question “Who Am I?'

“Throughout my life, I have had one huge goal. That one was to enlist in the Army as an infantryman, and I achieved that goal on April 25, 2017,” Kreischer wrote. “It was without a doubt the proudest day of my life….I am very proud to be an American. I believe that whatever cause America believes in, I have an obligation to believe in, because I am a patriot.”

“If I die in the combat zone for America, I do not call it a tragedy,” he added. “I call it a glory.”

Kreischer, along with Spc. Michael Nance, 24, died as a result of wounds sustained in a combat related incident after an Afghan soldier reportedly opened fire on them at military base in the Shah Wali Kot district in the southern part of the Kandahar province.

“These young men were true All Americans and embodied the qualities of selfless service and courage as they answered our nation's call to deploy to Afghanistan,” 3rd Brigade Combat Team commander Col. Arthur Sellers said in a statement. “Our focus is now providing their loved ones with every available resource to help them in this most difficult time.”

“In honor of the life and service of PFC Brandon J. Kreischer of Stryker, Ohio, flags will be flown at half staff upon all public buildings and grounds in Williams County, the Ohio Statehouse, and the Rhodes and Riffe buildings today through sunset on the day of his funeral,” DeWine said. “Fran and I extend our sympathy to his family and friends.”

Kreischer's awards and decorations include the Purple Heart, the Bronze Star Medal, the Army Service Ribbon, the Afghanistan Campaign Medal, the Global War on Terror Service Medal, the Combat Infantryman Badge and the Basic Parachutist Badge.