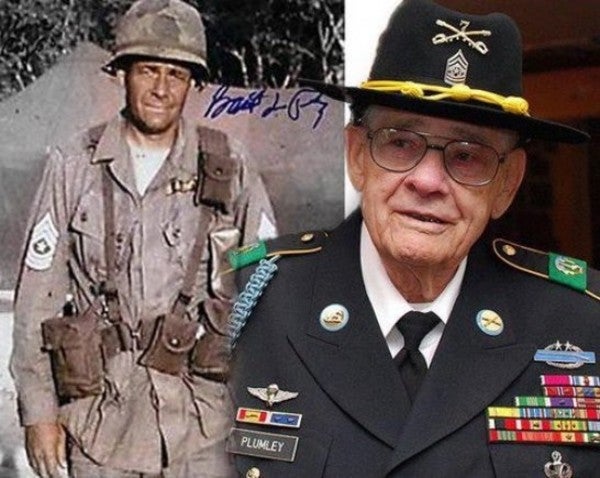 “Plumley's legacy will provide an inspiring example to other Soldiers, and through the memorializing of the facility in honor of him, we have the opportunity to validate the values that he personified: Loyalty, Honor, and Selfless Service. This dedication will honor his contributions and commitment to the 1st Cavalry Division, Fort Hood tenant units and the United States Army,” 1st Lt. Chadrick Dewitt, Phantom Warrior Academy executive officer, said in a Fort Hood press release.

A dedication ceremony was held on the morning of August 20th; his daughter, Debra Funkhouser, was present.

Plumley died in October 2012 at age 92 from colon cancer. Having served in World War II, along with both the Korean and Vietnam wars. According to a New York Times report from 2012, only 325 soldiers have served in all three. He was the former command sergeant major of the 1st Battalion, 7th Cavalry Regiment, 1st Cavalry Division.

The Times describes Plumley as a “no-nonsense, almost monosyllabic leader…even to a civilian,” and troops referred to him as “Iron Jaw.” He was a Silver Star recipient, for throwing a burning flare from a pile of ammunition while American troops were engaged with North Vietnamese soldier in November 1965, the Times reports. He also received the Master Combat Parachutist Badge with a gold star.

He enlisted in March 1942, per the Army, and retired in December 1974. After retiring, Plumley worked as an administrative assistant at Fort Benning's Martin Army Community Hospital for 15 years, the Times reports.

Plumley was portrayed in the movie “We Were Soldiers” by actor Sam Elliott, based on the 1992 book We Were Soldiers Once…and Young, written by Lt. Gen. Harold G. Moore and Joseph L. Galloway.

Sergeant Major Plumley We Were Soldiers

According to the Times, Plumley spoke frequently at officer and noncommissioned officer courses, but when an interviewer called and asked to hear his war stories, “he would hang up.”