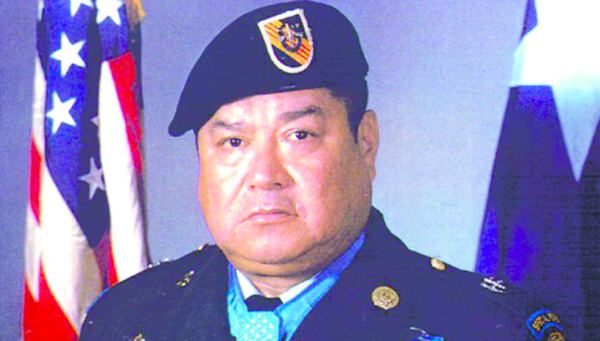 A Hispanic organization is teaming up with a Texas veterans group to push for Fort Hood to be renamed in honor of an absolute badass Vietnam War Medal of Honor recipient.

According to Stars and Stripes, the League of United Latin American Citizens (LULAC) “approved a resolution brought forward by a council of Texas veterans” to rename Fort Hood in honor of former Special Forces Master Sgt. Roy Benavidez.

Benavidez is a legend, plain and simple — so much so that the Association of the U.S. Army recently honored him in a graphic novel.

The Texas native was wounded by a landmine in Vietnam in 1965 and told he'd never walk again. But that simply wasn't going to work for him — so he went on to join the Special Forces.

A few years later, he rescued a 12-man Special Forces team that was pinned down near Cambodia-Vietnam border. Despite being wounded already in the face, head, and right leg, Benavidez dragged wounded team members onto a helicopter. He was then wounded in the back and abdomen, just before the helicopter crashed.

Despite his numerous wounds and, you know, just having crashed in a helicopter, Benavidez pulled the same wounded troops out of the crashed helicopter, called in airstrikes to push back on the advancing enemy, and killed an enemy soldier with his knife — after the soldier stabbed him in each arm with his bayonet.

Benavidez rescued eight soldiers, and by the time he got back to base, he was assumed to be dead because of the amount of blood he'd lost and injuries he'd sustained. His fellow soldiers were zipping him into a body bag when Benavidez spit to show that he was still alive. He died later in 1998, and received the Medal of Honor for his heroic actions.

If your jaw didn't drop one time while reading that, I'm going to have to ask you to read it again. Per Stars and Stripes, Benavidez received five Purple Heart medals.

The resolution to rename Fort Hood is an effort to bring more attention to contemporary heroes of recent (and ongoing) wars, said Air Force veteran Jorge Haynes, who brought the effort forward in the LULAC 777 Veterans Council in Texas.

That resolution was approved, and then brought before the national organization, which also gave it the green-light. LULAC is “the largest and oldest Hispanic organization in the United States,” according to the organization's website, which “advances the economic condition, educational attainment, political influence, housing, health and civil rights of Hispanic Americans.”

Fort Hood is currently named after Confederate Gen. John Bell Hood, who….never lived in Texas. According to Stars and Stripes, he commanded the “Texas Brigade” during the Civil War, fighting against the Union.

It's far from a done deal, though — per Stars and Stripes the resolution will next “go to the secretary of the Army, then to appropriate committees in Congress.”

But as a Texan, naming a military base in Texas after a certified Herculean badass from Texas sounds like a plan y'all.