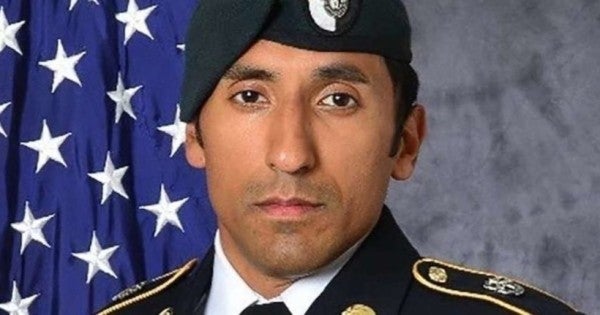 An NCIS agent was removed from the investigation into the June 2017 hazing death of Special Forces Staff Sgt. Logan Melgar for reportedly having a romantic relationship with a witness.

The Daily Beast reporter Kevin Maurer first reported that defense attorneys for two of the special operators charged with murder and other offenses in connection with Melgar's death will argue that the NCIS agent became romantically involved with the witness, who worked in the intelligence community.

NCIS spokesman Jeff Houston confirmed to Task & Purpose that an agent had been removed from the case but he declined to say why.

“Upon receipt of a credible misconduct allegation, NCIS immediately removed the agent from the investigation and referred the matter for appropriate action, consistent with applicable Human Resources guidelines and policies,” Houston said in a statement.

“Out of respect for the ongoing investigative and judicial processes, NCIS will not comment further until those processes have concluded.”

Navy prosecutors declined to discuss how the alleged relationship between the NCIS agent and the witness could affect the Melgar case, Baker told Task & Purpose on Monday.

Prior to Monday's hearing, DeDolph's civilian attorney Phillip Stackhouse told Task & Purpose that he would bring up the issue with the NCIS agent in court.

“Remedies at the Article 32 are limited; however, credibility is always a relevant decision making role,” Stackhouse said on Sunday.

Madera-Rodriguez's civilian attorney Colby Vokey could not be reached for comment.

Melgar died on June 4, 2017 in Bamako, Mali, after DeDolph and Madera-Rodriguez broke into his room along with two other U.S. troops, a British special operator, and a Malian security guard, all of whom planned to bind Melgar with duct tape and make a video of him being sexually assaulted. DeDloph is accused of placing Melgar in a chokehold until he died.

Navy Special Operator 2nd Class Adam Matthews was sentenced to one year in prison, reduction in rank to E-5, and a possible bad conduct discharge. Matthews is also under investigation for allegedly trying to manipulate Melgar's widow by discussing the case with her without revealing that he was charged with her husband's death.

Marine Pvt. Kevin Maxwell Jr. was sentenced to four years in prison, reduction in rank to E-1, and a bad conduct discharge.

This is the second high profile case where an investigator has been accused of misconduct. Army Spc. Mark Delacruz pleaded guilty in May to wearing the Purple Heart and other decorations he had not earned. Delacruz had been the Army's lead investigator in the Maj. Matthew Golsteyn murder case.

Golsteyn is charged with murder for acknowledging he killed an unarmed Afghan man, whom he believed was a Taliban bomb-maker who intended to kill an Afghan tribal leader. President Donald Trump has called Golsteyn, a “U.S. military hero.”