An Army investigator involved in the case of a Green Beret's murder case has been suspended from his duties and charged with stolen valor. 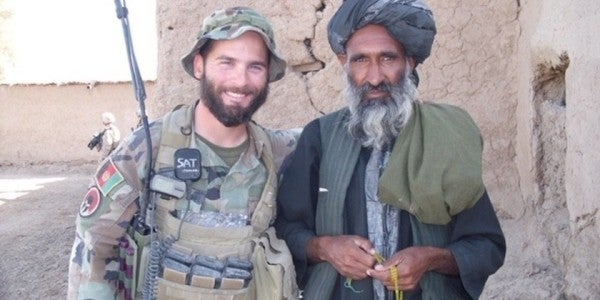 An Army investigator involved in the case of a Green Beret charged with murder has been suspended from his duties and charged with stolen valor, according to Dan Lamothe at The Washington Post.

Army Sgt. 1st Class Mark Delacruz, who has been a special agent with the Army's Criminal Investigation Command for more than four years, was charged with “unauthorized wear of a Purple Heart, Air Assault Badge, Pathfinder Badge and Combat Action Badge and is accused of submitting a package to an Army promotion board that stated he earned a Purple Heart when he did not,” the Post wrote, citing a CID spokesman.

The charges were first reported by NBC News.

The accusations throw a new wrench in the ongoing case of Army Maj. Matthew Golsteyn, who has been accused of murdering a suspected Taliban bomb-maker during a deployment to Afghanistan in 2010. The Special Forces soldier admitted to the killing during a CIA polygraph in 2011, but was not charged at the time due to lack of evidence.

Soon after Golsteyn admitted to the killing in an Oct. 2016 interview with Fox News, the Army charged him with premeditated murder in Dec. 2018.

According to Golsteyn's lawyer, Philip Stackhouse, Special Agent Delacruz was assigned to the case sometime in 2016. In a letter to Lt. Gen. Francis Beaudette, the head of Army Special Operations Command, Stackhouse wrote that it came to his attention that Delacruz had committed “acts of 'stolen valor'” and had “held himself out as a Special Forces soldier, infantryman, sniper, and bragged about killing people in combat.”

“Ironically,” Stackhouse wrote, “He's bragged about losing his Special Forces Tab for an alleged bad shoot in combat — the same allegation made against Major Golsteyn. To much of this he has admitted to being a liar and doing so for personal gain.”

The charge of stolen valor from Golsteyn's defense team was just one of three matters mentioned in the letter, which asked for Baudette to waive an Article 32 hearing — a preliminary hearing to determine whether there is enough evidence to go to court-martial — in lieu of demanding a speedy trial. Among the other concerns were the Army ordering Golsteyn back to Fort Bragg, making it harder to meet with his lawyers, and apparent problems with his pay.

Stackhouse closed the letter by asking that Baudette dismiss the murder charge against Golsteyn and allow him to medically retire.

“The investigation into my actions began over seven years ago when the Army saw I intended to resign for an opportunity to work for a government agency,” Golsteyn told Task & Purpose in a statement through his attorney in Nov. 2018. “After four years of investigation, it resulted in the Army seeking to administratively separate me. For over two years now the decision to separate me or retire me has been pending in Washington, D.C. During those years, the Army allowed me to move on, begin a new career, and start a new family.

“If it's true they now want to prosecute me for allegations that have already been resolved — this vindictive abuse of power must know no limit. My hope is that Army leadership will stop this vindictive plan and effect the retirement that is pending.”