Legal experts do not believe that President Donald Trump crossed the line when he tweeted that he was reviewing the... 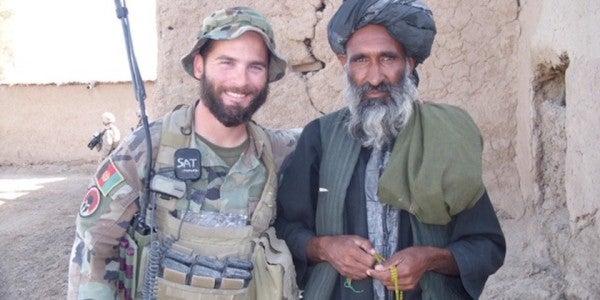 Legal experts do not believe that President Donald Trump crossed the line when he tweeted that he was reviewing the case of a Green Beret who is accused of killing a suspected Taliban bomb-maker.

Maj. Matthew Golsteyn has been charged with pre-meditated murder after he admitted during an October 2016 Fox News interview that he killed a detainee after a tribal leader told him the man built a bomb that killed two Marines. Golsteyn was reportedly worried that the suspected bomb-maker would kill the tribal leader in reprisal if released.

In a Sunday tweet, Trump voiced his support for Golsteyn: “At the request of many, I will be reviewing the case of a 'U.S. Military hero,' Major Matt Golsteyn, who is charged with murder. He could face the death penalty from our own government after he admitted to killing a Terrorist bomb maker while overseas.”

“I'm not a lawyer,” said Manning, who then repeated an earlier Pentagon statement on the matter. “I put out in that statement that we would respect the integrity of the process. It is a law enforcement matter and we will provide updates when appropriate.”

To find out whether the president had illegally interfered with the Golsteyn proceedings, Task & Purpose reached out to several military justice experts, including Daniel Conway, a civilian military lawyer and former Marine captain.

“I don't believe it was unlawful command influence for the commander in chief to state he would review the charging decision in a potential death penalty case,” Conway said. “He hasn't expressed an opinion on guilt, innocence, or disposition. He's exercising his rights as commander in chief. His discretion here is particularly important in a case that the Army already resolved years ago.”

It would be highly unusual for the prosecution in the Golsteyn to argue that Trump exerted unlawful influence over the legal proceedings, said retired Marine Lt. Col. Guy Womack, a military defense attorney and legal expert based in Houston.

Attorneys normally make an unlawful command influence argument when they feel commanders have made it impossible for their clients to get a fair trial, Womack told Task & Purpose.

“We really never think about it in terms of: Is it going to hurt the government in some way – will we deny them the chance to prosecute someone,” Womack said on Monday.

“You can certainly say that, well, someone should be prosecuted; no one should step in the way of that and prevent that. But really, the rule is meant more to protect the accused from an overzealous commander or convening authority. I've never seen it used the other way.”

Regardless of the letter of the law, Trump has still undermined the legal proceedings, said retired Air Force Lt. Col. Rachel VanLandingham, a former military attorney who now teaches at Southwestern Law School in Los Angeles.

“I do think his tweet puts inappropriate pressure on military decision-makers (like the preliminary hearing officer, and the convening authority) to make a decision not to prosecute,” VanLandingham told Task & Purpose.

However, Trump has not gone as far as former President Obama and former Marine Corps Commandant Gen. James Amos, both of whom ran afoul of unlawful command influence, she said.

Obama said troops convicted of sexual assault should be dishonorably discharged and Amos told the convening authority in the case of Marine scout snipers accused of urinating on Taliban corpses that he wanted the Marines “crushed.”

VanLandingham argues that President Trump should let the Golsteyn case play out because the legal process is designed to protect Golsteyn's rights and determine what the facts are.

“The major is not being investigated because anyone is out to get this war hero, but because his own statements apparently indicate he killed someone he shouldn't have,” she said. “The Army would be failing all service members and the country if it failed to take these steps.”