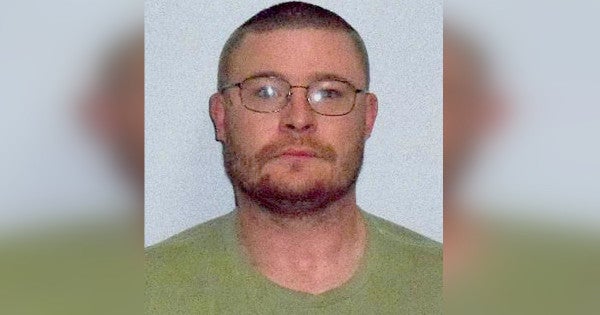 A 39-year-old Army veteran charged with assaulting a child for not removing his hat during the national anthem during a Montana county fair believed he was was simply following the orders of President Donald Trump, his lawyer said on Wednesday.

“His commander in chief is telling people that if they kneel, they should be fired, or if they burn a flag, they should be punished,” Lance Jasper, the defense attorney for Army vet Curt Brockway, told the Missoulian on Wednesday. “He certainly didn't understand it was a crime.”

Brockway was a specialist and served as a metal worker (44B) from November 1998 to May 2001, Army spokesman William Sharp confirmed to Task & Purpose, adding that his service verification file does not list any deployments or awards.

Brockway was charged on Monday with felony assault after reportedly picking up a 13-year-old boy and slamming him into the ground during a rodeo at the Mineral County Fairgrounds on Saturday.

Brockway told deputies with the Mineral County Sheriff's Office that he had asked the boy to remove his hat because it was “disrespectful,” according to charging documents obtained by the Missoulian, claiming that the boy had responded with a “f*ck you.”

The boy was flown to Sacred Heart Children's Hospital in Spokane, Washington for emergency treatment for a concussion and a fractured skull. His parents told local news station KPAX-TV that their son “was bleeding from his ear for nearly six hours after the incident.”

“It's just a lot of pain in my head,” the boy told KPAX-TV. “I don't remember anything – the rodeo – the helicopter – nothing.”

The national anthem has become a flashpoint since 2016, when former National Football League star Colin Kaepernick began taking a knee in a silent protest against police brutality. In recent years, Trump has condemned those protests as disrespectful to the U.S. military and veterans, even suggesting in 2017 that NFL coaches should fire players who participate.

However, Jasper, Brockway's lawyer, stated on Wednesday that the incident at the fairground was also the product of a traumatic brain injury that his client sustained during a 2000 vehicle accident while he returning home from active duty at Fort Lewis in Washington State to spent the holidays with his family.

According to the Missoulian, Jasper argued that Brockway's military service “has been central to his identity since suffering the injury to his frontal lobe, which controls cognitive functions like judgement and problem solving,” so far that Brockway was “no longer thinking for himself but responding to a presidential order,” during the assault.

“Obviously he (Brockway) owes a big portion of accountability for what took place, but it's certain that there was other things at work here that definitely contributed,” Jasper said. “Trump never necessarily says go hurt somebody, but the message is absolutely clear … I am certain of the fact that (Brockway) was doing what he believed he was told to do, essentially, by the president.”

“Obviously it's a tragedy whenever someone is injured, especially a young kid,” he added. “But with my client being a veteran with a traumatic brain injury, it is absolutely fair to say he got caught up in a heightened animosity and a heightened rhetoric that too many people are engaged in.”

Montana Department of Corrections records indicate that Brockway is currently rounding out a 10-year probation sentence for an assault with a weapon charge in 2010, the Missoulian reports. His arraignment at Mineral County District Court is set for Aug. 14.