The regularly-scheduled Marine Corps Boot Camp at Parris Island, South Carolina is canceled until further notice, or at least until Hurricane Dorian passes by and eventually fizzles out. 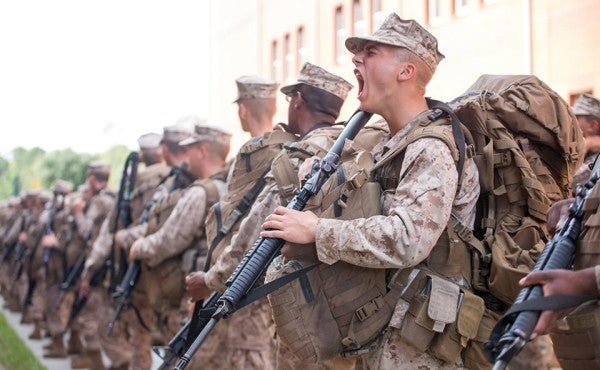 The regularly-scheduled Marine Corps Boot Camp at Parris Island, South Carolina is canceled until further notice, or at least until Hurricane Dorian passes by and eventually fizzles out.

Officials at Marine Corps Recruit Depot — the Corps' East Coast basic training — announced on Monday they were canceling graduation ceremonies for Golf and Papa Companies and sending those newly-minted Marines home a little bit early, while recruits currently in training are heading to Albany, Georgia to get out of the Category 2 Hurricane's path.

Recruits will still be doing some sort of modified training while at Albany, which is a logistics base. Meanwhile, recruits who were scheduled to travel to the depot to begin training are having their ship dates changes to later in the month, the Depot said on its Facebook page.

The evacuation of P.I. is not just for recruits, however.

The commanding general ordered all non-emergency military and civilian personnel to move at least 100 miles away. The order began at 5:00 p.m. on Monday and is expected to remain in place until the storm passes sometime around Thursday afternoon.

Due to the early graduation, plenty of families missed out on seeing their new Marines graduate from the 13-week training, so the Depot posted a shout out video from new Marines to their families.

The evacuation of recruits began on Tuesday morning, according to the Depot's official Facebook page. Under the watchful eye of drill instructors, recruits were loaded onto buses to make the roughly 4 1/2 hour journey to Albany.

Similarly, officials at Camp Lejuene, N.C. are keeping an eye on the storm but have not issued any evacuation order. According to a post on its official Facebook page, Lejeune officials are pre-staging equipment and supplies.

Dorian has already smashed into the Bahamas and has moved towards the Florida coast, according to the National Hurricane Center. On its current track, the storm is expected to continue moving north from Florida and make landfall in South Carolina on Thursday morning.

It could also potentially hit North Carolina, Virginia, and other states further up the eastern seaboard.