Simpson, 43, plead guilty to wire fraud in federal court on Monday for bilking Marines and their families out of $481,000 through a charitable organization called 'Marines and Mickey,' the U.S. Attorney's Office for the District of South Carolina announced, only $90,000 of which was actually used for charitable purposes 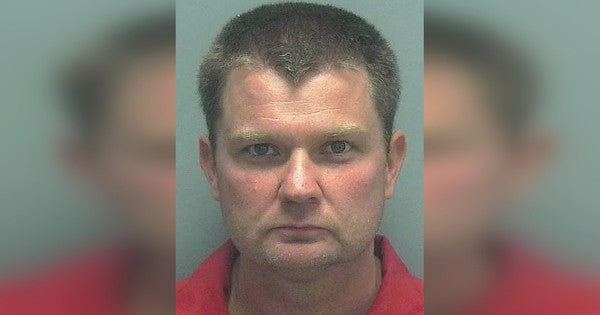 John Shannon Simpson claimed he retired from the Marine Corps as a master sergeant after 20 years as an elite Recon Marine and drill instructor, and that his charitable organization was raising money to help recent Marine recruits and their families visit Disneyland.

In reality, Simpson never made it higher than an E-3 and was working as a basic disbursing clerk when he went AWOL for an entire year in the late 1990s, according to the Department of Justice — and most of the nearly half million he extracted from young Marines and their families over two years went straight into his pockets.

Simpson, 43, plead guilty to wire fraud in federal court on Monday for bilking Marines and their families out of $481,000 through a charitable organization called 'Marines and Mickey,' the U.S. Attorney's Office for the District of South Carolina announced, only $90,000 of which was actually used for charitable purposes.

Simpson admitted to actively soliciting donations from recent recruits at Marine Corps Recruit Depot Parris Island under the guise of a seasoned career Marine, going so far as use the debit card numbers of at least seven active-duty boot camp graduates to drain around $5,000 from their accounts.

In reality, Simpson served from 1993 to 1998, when he was found in violation of Article 86 of the Uniform Code of Military Justice at a special court martial, busted down to an E-1, and given a bad conduct discharge.

“By misleading donors and volunteers about his military background, Simpson was able to add credibility to his solicitations for money,” the DoJ said in a statement.

According to the Charlotte Observer, Simpson's “primary victim” was Cathy Well, the mother of Lance Cpl. Skip Wells, who was one of four Marines killed at shooting at a Chattanooga, Tennessee military recruiting center in 2015.

In January 2017, Simpson was arrested by Florida police and charged with burglary, kidnapping and sexual assault after a former employee of his charity “stalked her for months before showing up to her house” before assaulting her, the Times Free Press reported at the time.

Simpson received a nine-year prison sentence for those charges in May 2018. He now faces a maximum federal sentence of 20 years in federal prison and/or a $250,000 fine.

SEE ALSO: California Marines Wrapped Up In $67 Million Scam To Rip Off TRICARE

WATCH NEXT: That Time Marines Drank All Of Iceland's Beer